Before classes begin, teachers focus on their relationship with Jesus at retreats 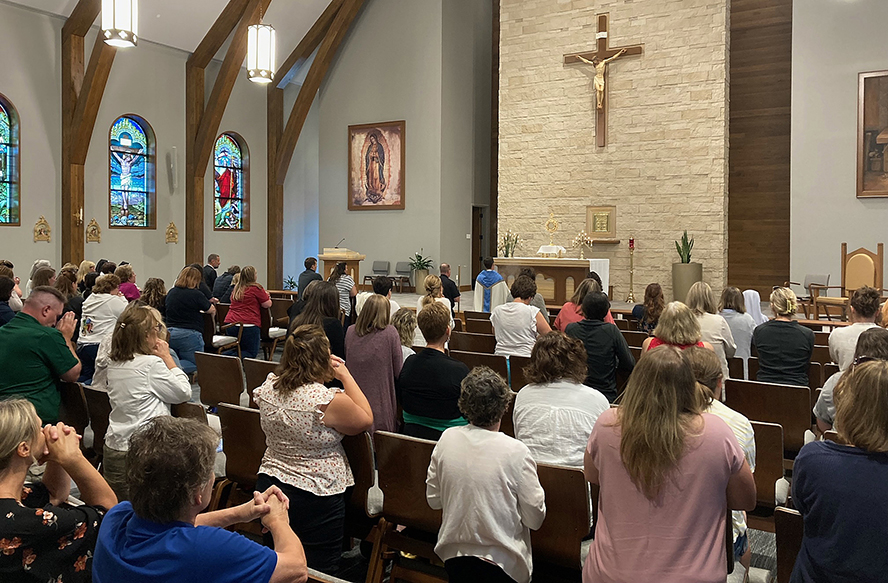 They’re often asked to serve as social workers, law enforcement and parents, too, according to Mary Cushing of St. Thomas the Apostle School in Peoria Heights.

“They’re basically being asked to do the impossible through the circumstances of our world right now,” she said, quoting Dr. Ray Guarendi, a Catholic psychologist, author and speaker.

Msgr. Brian Brownsey, pastor of St. Mark Parish and School in Peoria, encourages teachers to embrace their identity as children of God, saying everything stems from that, at one of the talks at a retreat day at Sacré-Coeur Retreat Center on Aug. 12. (Provided photo)

Knowing that no one can spread the Gospel unless they’re also living it, a group of Catholic schools in the Peoria area and another group from Galesburg, Monmouth and Macomb took their teachers to Sacré-Coeur Retreat Center in Magnolia in the days before classes began to do just that.

“We wanted an opportunity to not have an in-service, not have an assignment, but just have a time for teachers to come away and focus on their personal relationship with Christ because that’s what we want for our students and we have to have it ourselves,” said Cushing, who teachers seventh and eighth grade religion and is the new director of faith formation for St. Thomas the Apostle Parish and School.

“It was really nice to be in a different location,” she told The Catholic Post. “I know when you’re in the school building you’re just thinking ‘I have this bulletin board to finish. I have these copies to make.’ You have to get away and relax.”

All of the schools in Region I were invited to the retreat on Aug. 12, but not all were able to come, Cushing said. In the end, they had 109 people from Holy Family and St. Jude in Peoria, St. Edward in Chillicothe, St. Mary in Metamora, St. Joseph in Pekin, and St. Patrick in Washington, as well as St. Thomas the Apostle in Peoria Heights.

They heard talks about self-care for teachers and people in helping professions like education from psychologist Michelle Baker, and about our identity as children of God from Msgr. Brian Brownsey, pastor of St. Mark Parish and School in Peoria. The group also had time for eucharistic adoration, the sacrament of reconciliation, and Mass.

REMEMBERING WHERE TO FOCUS 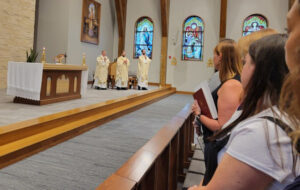 Father Adam Stimpson, pastor of St. Paul Parish and School in Macomb, is the principal celebrant for a Mass for the teachers from St. Paul in Macomb, Immaculate Conception in Monmouth, and Costa Catholic in Galesburg, during a retreat Aug. 8 at Sacré-Coeur Retreat Center in Magnolia. Concelebrating are Father Lee Brokaw of the Galesburg Catholic Community (left) and Father Tim Hepner of Monmouth (right). (Provided photo)

Laura Cody, principal of St. Paul School in Macomb, and Randy Frakes, principal of Immaculate Conception School in Monmouth, started talking about having an overnight retreat at Sacré-Coeur last fall, when the Catholic school principals met there for the first time.

“We thought it would be a good thing for our staffs to get away and have time for some spiritual guidance and some time with our priests and with each other, just for some fellowship and some faith and to clear heads before we start the school year with everything that’s kind of gone on these past couple of years,” Frakes said.

“We started saving our pennies to make it happen,” Cody said.

Going in on the planning for the Aug. 8-9 retreat was Julie Purl, lead teacher at Costa Catholic Academy in Galesburg.

Father Adam Stimpson, pastor of St. Paul in Macomb; Father Tim Hepner, pastor of Immaculate Conception in Monmouth; and Father Lee Brokaw of the Galesburg Catholic Community, joined their teachers for Masses, a Holy Hour and confessions, as well as a social.

The speaker was Father Nicolas Wilson, parochial vicar for the Ottawa Catholic Community, who offered reflections on “A Catholic Approach to Education” and “Building Relationships with Jesus and Your Students.”

“We’re all so busy as we prepare to get into the school year,” Frakes said. “I think you can kind of get caught up in that and forget that other piece, which is the most important piece — keeping Jesus in front of us and focusing on that. Everything will be OK if we keep that in front of us. The rest of it will all get done.”