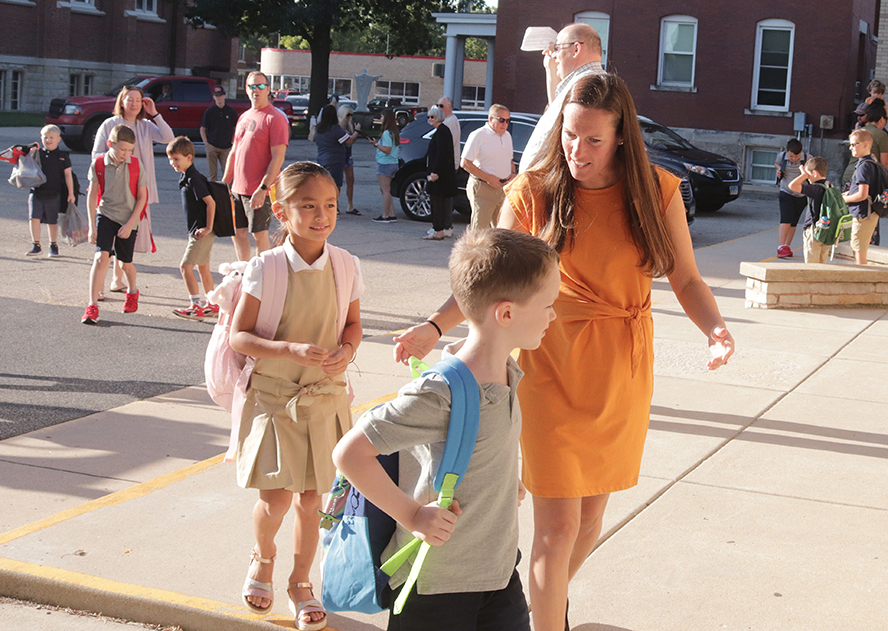 Principal Brooke Rick shepherds Liam Gretencord, fourth grade, and Ariana Miller, second grade, as they arrive for the first day of school at Marquette Academy in Ottawa on Aug. 17. (The Catholic Post/Jennifer Willems)

OTTAWA — Students returning to classes at Marquette Academy this week packed more than school supplies and classroom supplies for the first day of school.

Mary Dyche, an aide at Marquette Academy in Ottawa, and Zoey Bowen are happy to see each other as the school year begins Aug. 17. (The Catholic Post/Jennifer Willems)

They also brought heaping doses of joy and excitement that were matched by teachers, aides and their pastor, Msgr. Mark Merdian, and principal, Brooke Rick, who waited to greet them.

Rick said she was ready to put COVID-19 behind them and “getting back to the norm, getting back to our traditions and our way of doing things. I’m just excited to have everybody back in the building and moving forward.”

Students in kindergarten through eighth grade were welcomed back at the elementary school campus next to St. Columba Church on Aug. 17, as were the freshmen at the high school campus a few blocks away. The sophomores, juniors and seniors joined them on Aug. 18.

The first all-academy Mass was celebrated on Aug. 19.

The pre-school students were due to start the new academic year at “mini Marquette” on Aug. 22.

Most, if not all, of the other 42 Catholic schools in the Diocese of Peoria followed suit or were scheduled to open their doors early next week. 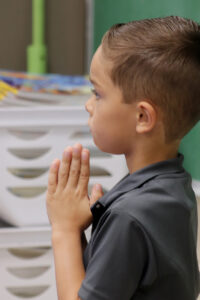 Retirements, movement within the school, and teachers taking employment in public schools did leave Marquette with some teaching vacancies, Rick said. Many public and private schools across the state have found themselves in similar circumstances.

“It was a busy summer,” she said. “We actually filled all of our vacancies — some of them right before we started school. . . . We were lucky.”

Agriculture was a particularly difficult course to find a teacher for, Rick said, noting that there were 116 openings for ag educators in Illinois this year.

“We did get someone and she is going to be fantastic,” according to Rick. “We are super blessed. I’m really excited.”

The academy’s agriculture and FFA programming have grown over the last couple of years and Rick said she is looking forward to seeing where that will head academically.

An addition that is highly anticipated is a fine arts program that will incorporate art, music, theater, creative writing, dance and movement.

EDITOR’S NOTE: More photos from the opening morning at Marquette Academy have been posted to The Catholic Post’s site on Facebook.