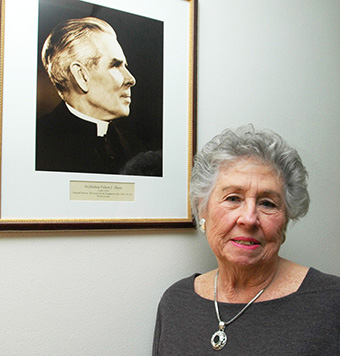 Joan Sheen Cunningham, niece of the late Archbishop Fulton J. Sheen, poses next to a portrait of her uncle in this 2004 file photo. Mrs. Cunningham died in Peoria on Aug. 12, 2022, at the age of 95. (CNS/Chris Sheridan)

BARTONVILLE — Joan Sheen Cunningham, a niece of the Venerable Archbishop Fulton J. Sheen and a key figure in his life and sainthood cause, was remembered at her funeral Mass on Aug. 16 as “a determined and very strong woman of faith.”

“Joan was a witness, a disciple, a teacher, a strong and good lady,” said Bishop Emeritus Daniel R. Jenky, CSC, in his homily Aug. 16 at St. Anthony Church in Bartonville. “She, like her uncle, is someone we can look to for our own path through life.”

Bishop Louis Tylka was the principal celebrant of the funeral Mass. Burial was to follow at a later date at The Gate of Heaven Cemetery in Hawthorne, New York. 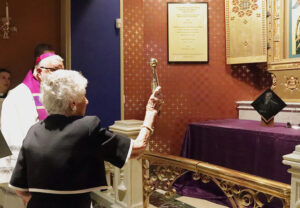 Joan Sheen Cunningham sprinkles holy water on a new tomb bearing the remains of her uncle at St. Mary’s Cathedral in Peoria on June 27, 2019. Archbishop Sheen’s remains were transferred from St. Patrick’s Cathedral in New York City to the Peoria cathedral. (The Catholic Post/Jennifer Willems)

As Archbishop Sheen’s oldest living relative, Mrs. Cunningham filed a petition in 2016 asking that the trustees of St. Patrick’s Cathedral in New York City — where her uncle had been entombed in a crypt following his death on Dec. 9, 1979 — and the Archdiocese of New York allow his remains to be disinterred and transferred to Peoria for interment in a crypt at St. Mary’s Cathedral in Peoria. The Diocese of Peoria, which had been researching and promoting the sainthood cause of the famed orator and media pioneer since 2002, considered the transfer vital for the cause’s continuation.

An ensuing legal dispute would take three years to resolve.

“Joan attended five different legal cases and spoke movingly on behalf of her family,” recalled Bishop Jenky. “And she won every single one of them.”

Bishop Jenky said when he heard that Mrs. Cunningham had died, “I immediately pictured her being as determined as ever arguing our case in heaven — arguing that her uncle, the Venerable Servant of God Fulton J. Sheen, should quickly be scheduled for beatification.”

Mrs. Cunningham was present at both the disinterment of her uncle’s remains in New York and their arrival at St. Mary’s Cathedral in Peoria on June 27, 2019. Archbishop Sheen, a native of the Diocese of Peoria, had been ordained to the priesthood in its cathedral nearly a century earlier. 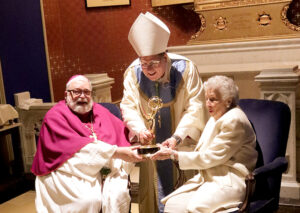 In addition to her parents and her husband, Mrs. Cunningham was preceded in death by two sons, Jerry and Fulton; four brothers, Joseph, John, Fulton, and Tom Sheen; and a sister, Sue Zegers.

In his homily, Bishop Jenky said Archbishop Sheen helped to raise young Joan and the two remained close. She received her first Communion from him at age 6 and visited him the Friday before he died on Sunday, Dec. 9, 1979. In between, their lives were interwoven through visits, travel together, and his help with everything from choosing her schools to finding her places to live.

Mrs. Cunningham wrote a book, titled “My Uncle Fulton Sheen,” recalling the times she spent with her relative. It was published by Ignatius Press in 2020.  The book includes lessons she learned from her uncle, whose 20-year nationwide radio broadcast — followed by a hit five-year television series, “Life Is Worth Living” — made him the United States’ most visible priest.

“My faith is a big thing he gave me,” she told Catholic News Service after the book’s release. “As I grew up, my faith got deeper and deeper with God, and that was through him. I think it has gotten deeper in my older life.” 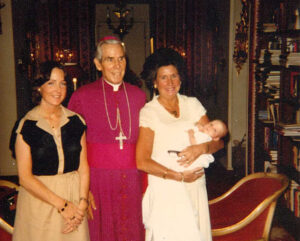 Archbishop Sheen is pictured with his niece, Joan Sheen Cunningham, to his left holding her grandchild, along with her daughter, in this undated photo.

In May of 2021, Mrs. Cunningham — then living in New York — came to Peoria to present the Sheen Foundation a truckload of personal items from Archbishop Sheen, including the Emmy Award that he won in 1952 for his television show.

She soon moved back to the Peoria area and became a member of St. Anthony Parish. In remarks at the end of the funeral Mass, Father Charles Klamut, pastor, called her an “elegant, faithful, feisty woman whose candid and colorful New York ways brought spice” to the parish community.

“As Joan’s pastor, I knew her more not by whose niece she was, but by whose daughter she was,” said Father Klamut. “She was a beloved daughter of our heavenly Father and she was a devoted disciple of our dear savior, Jesus Christ.”

Memorials may be made to the Archbishop Fulton J. Sheen Foundation via mail to the Spalding Pastoral Center, 419 N.E. Madison Ave., Peoria, 61603, or online at archbishopsheencause.org, or to St. Anthony Catholic Church.

Portions of this story were provided by Catholic News Service reports.