A grateful editor at career’s sunset 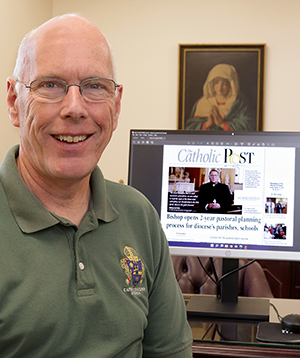 On a few occasions in the course of my 43-plus years on the staff of The Catholic Post, I’ve gotten personal in this space. When a local Catholic cemetery reserved an area for the remains of infants lost to miscarriage, I shared the pain of two such experiences in my marriage. As the world was marking a century since the end of World War I, I recalled my grandfather’s wounding and capture in that conflict’s Meuse-Argonne Offensive, marveling at the mystery of God’s providence in our family tree.

Allow me to get personal one more time.

Since May of 1979, when then-editor Msgr. Robert G. Peters hired me fresh out of Bradley University’s School of Journalism, it has been my privilege — and a blessing beyond measure — to report on the actions and the faith of the People of God in the Diocese of Peoria. For the last 32 years, as editor, I’ve done my best — with God’s help, the talents of an incredibly devoted staff, and the generous support of loyal readers — to navigate the changing landscape of how news, and especially Catholic news, is delivered and received.

It is time to hand the baton to a new editor. I plan to retire this fall.

Deciding when to take the career off-ramp was not easy. In this diocese, the Holy Spirit has actions awaiting around every bend, and I know there is much I will miss. This edition of The Catholic Post, for example, is highlighted by the start of a two-year pastoral planning process announced by Bishop Tylka that will bear fruit for years to come. And I pray that, not far down the road, the Diocese of Peoria will host a global celebration for the beatification of Archbishop Fulton J. Sheen.

“Sunrise, sunset . . . swiftly fly the years” observes the song from the musical “Fiddler on the Roof.” And so they do. But as my career sunset approaches, the lyric that comes to mind is from Lin-Manuel Miranda’s Broadway hit “Hamilton.”

“Who tells your story?” cast members ask in the finale.

For 43 years, I’ve had the honor and responsibility of being among those to hear and tell your stories. The stories of priests about to be ordained, looking back at retirement, or gone to their eternal reward. Of new churches, medical centers, and schools as they are blessed, and of nostalgic farewells to beloved but outdated facilities. Of inspiring messages addressed to crowds of thousands, and of wise spiritual direction offered to a dozen souls huddled in a parish hall. Of pro-life warriors, of high school sports state champions, of missionaries’ tales of foreign lands, and of five uniquely gifted bishops of Peoria.

Because of the deep faith of the people of this diocese, these examples and more are really God’s story. Recognizing that makes me even more grateful, and humble.

The newspaper of the Diocese of Peoria has been faithfully telling your/God’s story for nearly 90 years. There have been only five editors in that span — two of them, Msgr. Peters and Albina Aspell, have legendary status in the Catholic press. I could not have had better mentors, nor better team members in ensuing years. A search is beginning for a sixth editor. I ask your prayers for that process. I also ask your forgiveness for times I erred or disappointed. But chief among the jumble of emotions I am experiencing is gratitude, more than I could ever express in this space. Thank you, dear readers.

I look forward to reading about you in the years to come. — Thomas J. Dermody