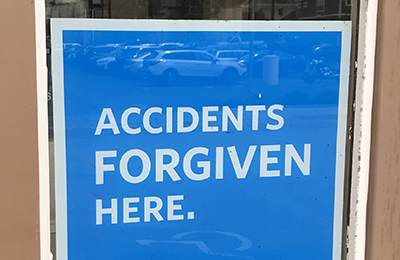 A sign on a door adjacent to Care Net Pregnancy Center in Monroe, Wisconsin.

This column is meant most particularly for all of us who have participated in the sacrament of reconciliation — whether regularly (weekly or monthly), on special occasions (Christmas or Easter), or even for whom the last time may have been at confirmation.

People describe many things as “good for the soul” or “life-changing” these days . . . anything from a beautiful sunset to a tasty burger or beer (in the case of the beer, I might just be persuaded).

However, when one says confession is good for the soul in polite company, there is often a pause in the conversation. Meanwhile, though beyond the range of earthbound ears, I suspect a chorus of saintly voices is chiming in to agree.

Of course, the benefits of confession aren’t confined to church. Although she didn’t describe it in religious terms, actress Diane Keaton (a.k.a. Annie Hall), used the word “confession” twice in her memoir “Then Again” when revealing she had been secretly bulimic for five years in her 20s. Addressing the question of why she would choose to reveal this 30 years on, she said she didn’t expect sympathy or commiseration: “What I expect is to be released from the burden of hiding.”

Pope Francis, on the other hand, spoke from a consciously spiritual perspective during his recent “pilgrimage of penance” to Canada to ask forgiveness for the church’s role in the culture of abuse perpetrated against indigenous peoples in residential schools. He said, “I have come to your native lands to tell you in person of my sorrow.” Similarly, with sacramental reconciliation, one makes a kind of in-person pilgrimage to one’s parish church.

Further, Pope Francis promised the indigenous people that “begging pardon is not the end of the matter . . . only the first step.” In the same way, when making our act of contrition during confession, we ask for a renewal of God’s Grace in us to help us find — and remain — on the path to Him.

As John Newton, the former slave ship captain who became an Anglican priest and abolitionist, poured out in his hymn “Amazing Grace,” “I once was lost, but now am found.” (Speaking of which, I once attended a church that had converted a confessional into a “lost and found” closet, due to fewer people seeking reconciliation.)

“HANG IT ON THE CROSS”

Truth is, when I walk into church for confession, I’m kind of relieved if there’s not much of a line-up, and I follow that with a feeling of guilt for my selfishness. (I should probably go in and confess that as my first sin!)

I know many get stressed out by the misunderstanding that confession is punitive, judgmental . . .  all about sackcloth and ashes. No. As King David sang, “A contrite, humbled heart, O God, you will not scorn.” (Psalm 51:19)

This is movingly reiterated in what could be described as a modern “psalm” by Canadian singer-songwriter — and former work colleague of mine — Kelley Mooney. Kelley has a song called “Hang It On the Cross” on her devotional album “Still” (available via various streaming services). For me, this song perfectly encapsulates what God will do for a contrite heart. Here’s a lyric excerpt:

I stand on shameful ground

There’s temptation all around

Jesus, take away my sin

Take away my sin

And hang it on the cross

If I take my sin to Him, it’s not mine anymore. Don’t even bother trying to take it home after confession, Paul!

I was reminded of this brand of radical forgiveness when my wife and I visited Monroe, Wisconsin, recently. In a shop window we saw a sign for a pregnancy support center. We decided to stop in and were blessed to be able to speak to Anna Anderson, executive director of the Care Net Pregnancy Center of Green County.

We shared how much we appreciated the center’s work, especially in the wake of the reversal of Roe v. Wade. There has never been a truer expression of the heart of pro-life than support for girls and women in crisis pregnancy situations, and it’s more crucial than ever.

Anna said their approach (and I know the approach is the same for Illinois’ 95 pregnancy care centers) is never judgmental. It’s about a mother and child, and how “we can support the loving choice” for them both. I noted that when we were about to enter the center’s door, we saw a sign we thought must be theirs. It read “Accidents forgiven here.”

Anna laughed. No, that was for the insurance company next door, “. . . but the same philosophy applies!”

Here’s to longer line-ups at the confessional, sins lost and forgiveness found.

PAUL THOMAS MOORE is a Catholic communicator and singer-songwriter. He and wife Mary Louise attend St. Mary of Lourdes in Germantown Hills. He can be reached at paulthomasmoore@hotmail.com.