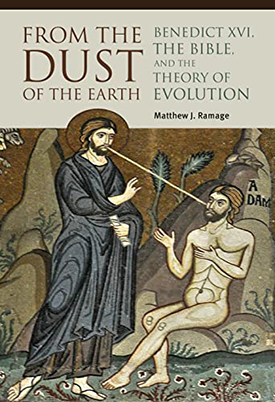 Dr. Matthew Ramage's book "is a timely and needed work in the quest to explain human origins in light of Faith and science."

Reviewed for The Catholic Post by Matthew Vander Vennet

Many Christians today bristle when someone mentions the word “evolution.” This reaction has become unfortunately too common. As Catholics, we do not need to shy away from the conversation and debate regarding evolution and the Faith.

Dr. Matthew Ramage’s recently released book from The Catholic University of America Press — “From the Dust of the Earth: Benedict XVI, the Bible, and the Theory of Evolution” — is a powerful addition to the conversation.

A noted scholar on Pope Benedict XVI and his writings (and former son of the Catholic Diocese of Peoria), Ramage seeks to address the perceived dissonance between evolution and the Faith. Spoiler alert: there is none.

This work is a well-planned excursus through the deep thought sustained over decades by the emeritus pontiff and his wrestling with the most fundamental questions of man’s origins in light of the Catholic faith and of the last two centuries of the scientific revolution.

The volume is divided into three sections, each building to the climax at the end. Part one addresses the preliminary philosophical questions and misconceptions regarding faith and science. A particularly favorite chapter of mine in this section was chapter three where Chesterton, Tolkien, and Lewis were all referenced in the discussion regarding how God creates through evolution.

Part two discusses how to read the Bible’s creation narratives in light of Ratzinger and Catholic Tradition. The native context of the creation account is integral to understanding what the authors of the text were aiming to convey about God and man’s relationship.

Finally in part three, Ramage unpacks the way to understand man’s special creation and the Fall in an evolutionary context in light of the previous two parts. An appendix and copious bibliography are included for further study on the matter.

THE CREATIVE ACT OF GOD

The heart of the question relates to the origins of man. Both faith and science are ways of understanding those origins. What Ramage suggests is to read Genesis with the assistance of Pope Benedict and in light of Catholic Tradition.

First, however, groundwork must be laid in order to begin to grow in understanding on how Christians can answer objections to the perceived dichotomy. That groundwork includes the proper way to view and interpret the creation narratives in their historical contexts, but also the critical study that has been undertaken in biblical studies and the empirical sciences in the last two centuries. Unfortunately, most people — including Catholics — fall into an either/or situation when it simply is not the case. Catholicism is the great both/and religion and the thought of the emeritus pope offers us a way to fully engage in the conversation in a cogent and robust manner.

A key to understanding Pope Benedict XVI/Joseph Ratzinger’s thought on evolution is that it is a movement. Thus, quoting Ratzinger, “‘evolution is . . . simply the understanding of creation in its temporal actuality.’” (72) Put simply, the creative act of God is manifest from our perspective as history. Creation itself, as a whole, should be understood as an expression of the Logos. Of course, this Logos — the Eternal Word — is Jesus Christ.

As such, the entirety of the cosmos and of its progression, so to speak, is understood only in light of Christ and the paschal mystery. The Alpha can only be understood in light of the Omega. In fact, “the shape of all creation may be described as paschal or cruciform.” (271) According to Ratzinger, suffering and death was integral to God’s plan from the beginning.

NOT SO MUCH HOW, BUT WHY

Benedict’s teaching, as explained by Ramage, ultimately states “the dynamic of evolutionary history on earth . . . has a profound connection to the definitive heavenly transfiguration of the cosmos at the end of time (where, passing through death, all life will be transfigured and conformed to the image of Jesus Christ).” (272) It is not necessarily how man was created at some distant point in the past, but why he was created in the first place that Benedict focuses upon. Truly, asking the right questions becomes just as important as the answers those questions seek.

It is quite difficult to convey the import of this work in the few paragraphs of a review. Dr. Ramage’s book is a timely and needed work in the quest to explain human origins in light of Faith and science. Not only does the work further the dialogue and conversation on the matter of faith and evolution, it also contributes to the scholarship and understanding of one of the greatest theological minds of the 20th century and his thoughts.

The work is deeply annotated without being distracting. Those with both a scientific and/or theological background will find the volume illuminating. However, anyone who is interested in tackling this subject will ultimately benefit from reading this volume. It is a highly accessible work for anyone willing to take the time to read it and it is highly recommended. 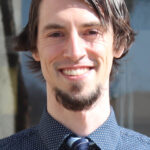 Matthew Vander Vennet is director of advancement and development at The High School of Saint Thomas More in Champaign and a member of The Catholic Post’s book review team.