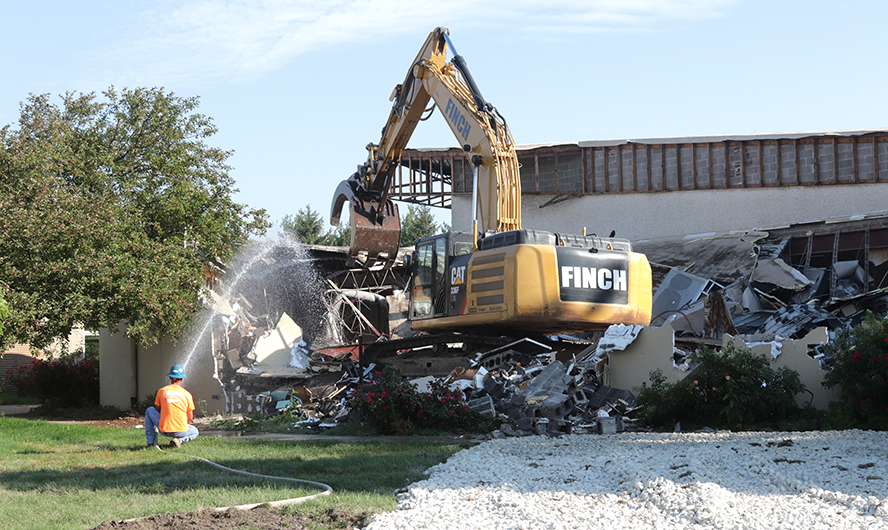 After two weeks of asbestos abatement, hand demolition and preparation of the site, an excavator started taking down St. Jude Church in Peoria on Aug. 16. Construction of the new church is expected to take 14 months. (The Catholic Post/Jennifer Willems)

On a day that was tinged with sadness yet filled with thanksgiving, parishioners at St. Jude Church in Peoria came to the altar on July 31 for one last Mass in what had been their spiritual home for nearly 50 years. Then they started to strip the church of its altar, tabernacle, ambo, Stations of the Cross, statues and even the pews.

“Today there’s that bittersweet — you’re saying goodbye,” he told The Catholic Post. “But there’s that hope for the future. There’s that whole idea of we’re excited about what is to come, as well.” 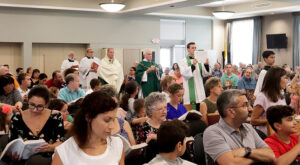 The procession to transfer the altar stone, carried by Father Daniel McShane, parochial vicar, and the Blessed Sacrament, carried by Father Patrick Henehan, pastor, from St. Jude Church arrives in Hettinger Hall on July 31. The hall will serve as the worship space for the community while a new church is being constructed. (The Catholic Post/Jennifer Willems)

What is to come in 14 months is a new church that will sit on roughly the same footprint as the one they just left, but add about 150 to 200 feet, Father Henehan said.

Demolition of the church began first thing on Aug. 16, with an excavator making quick work of taking down the walls. Troy Wertz of P.J. Hoerr, the contractor for the project, said they hope to have everything down within the week and then spend two or three weeks sorting everything and recycling it or removing it.

“The rock will be crushed and they’ll bring some of it back to be fill here so it will be part of the new church,” he said.

A groundbreaking ceremony will be held once the site is leveled and prepared for the foundation.

“Finally,” said Ron Colgan, chair of the building committee, as he watched the excavator do its work.

“We started pre-COVID with the planning and then we kind of went on hiatus. It really got started a year or so ago,” he said. “So it’s just good to get his far. But we still have a lot of work to do.”

The $11.6 million building will include a rotunda with a baptistery, through which parishioners will enter the church. 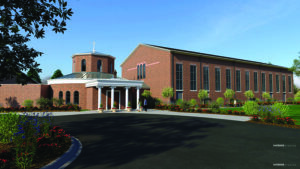 An architect’s rendering of the new St. Jude Church in Peoria. Completion on the site of the present church is expected by the fall of 2023.

“The church is intentionally mission oriented,” Father Henehan explained. “The baptistery is in the center of the first building so you remind yourself of your identity as a child of God. The outside will probably say, ‘Go, therefore and baptize all the nations.’ Mission.”

In the meantime, the parish’s Hettinger Hall has been made over to serve as the worship space during construction. In a procession from the church at the end of the July 31 Mass, Father Henehan transferred the Blessed Sacrament, and Father Daniel McShane, parochial vicar, carried the altar stone and placed it in the temporary altar.

Designed by architect James McCrery of Washington, D.C., the new church will add seating for between 200 and 250 people. Father Henehan said that’s important in a parish that in 2007 had 550 families and today has 1,300 families.

“Moving forward like this we’re trying to deepen discipleship. We know people need those spaces,” said Father Henehan, who noted that they hope to have the Blessed Sacrament exposed in the church until 9 p.m. each day. “Throughout Peoria or if you’re in the area you’ll know, ‘I can always go there. It’s open. I can pray there.’”

And there will be light over the altar, trained on the Blessed Sacrament in the monstrance. 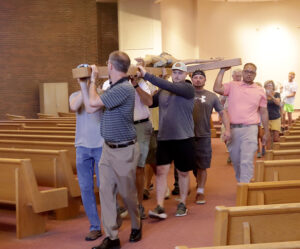 The crucifix that had graced the wall behind the altar at St. Jude Church in Peoria is lovingly carried out of church so that it can be placed in storage. The parish is embarking on an $11.6 million building project that will give them a new church by next October. (The Catholic Post/Jennifer Willems)

“It’s designed with that intent, so that we have that encounter with the Lord, especially in the Eucharist, to foster and send us on mission,” Father Henehan said.

While the construction can be completed for $11.6 million, it will take some time, thought and planning to add things like stained glass windows. “Inflation is real,” the priest said.

Artwork is being designed for the back of the apse that will show a Pentecost scene with the Blessed Mother, the apostles and saints that will encourage people to remember that it didn’t just happen once.

“Pentecost continues to happen and it enlivens us at every Mass so we all become missionary,” Father Henehan said.

LOOKING TO THE FUTURE

When parish leaders started to look at the current church’s structural issues in 2018, the goal was not to build something new. But the church had been adapted about three times already and there was some concern about what other issues might be discovered once contractors started to cut into the walls.

When the decision was made to start over, Father Henehan said, “People were just tremendously generous.”

There were two $1 million lead gifts for the Heart of the Parish Capital Campaign and another for $500,000, with other sizeable pledges made along the way. The parish is currently more than $10 million toward its goal.

The contractor is P.J. Hoerr. Mike Kuertz, a parishioner, is overseeing the project for the Peoria construction company.

EDITOR’S NOTE: More photos from the final Mass at St. Jude Church have been posted to The Catholic Post’s site on Facebook.