Beyond ‘a good conference,’ Charismatic Renewal event was transformational 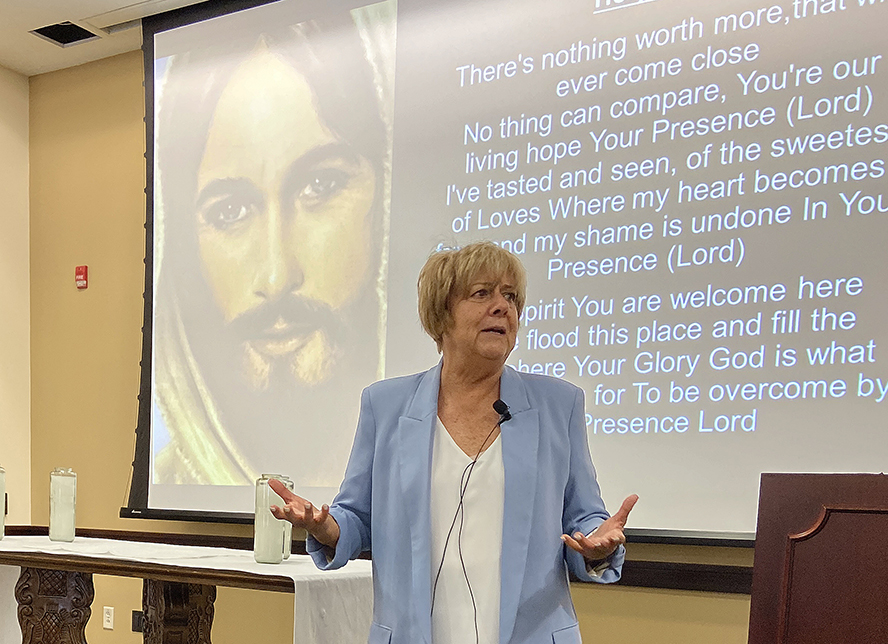 Dr. Carol Razza, one of the keynote speakers for the 36th annual Catholic Charismatic Renewal Conference on July 30, talks about the theme, "Turn Your Eyes Upon Jesus," as the conference image looks over her shoulder. (The Catholic Post/Jennifer Willems) 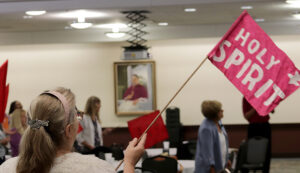 Participants at the Catholic Charismatic Renewal Conference in Peoria on July 30 were encouraged to set the Holy Spirit free and they did just that by singing, waving flags and lifting their hands in prayer. (The Catholic Post/Jennifer Willems)

“No. We say to each other, ‘I’ve been transformed. I’ve been changed. I believe the Lord has a purpose and a plan for my life. I can’t sit idle anymore,’” she said during the conference’s first session at the Spalding Pastoral Center in Peoria. “The same spirit that raised Jesus from the dead, where does he live? In us! In us!”

While that was enough reason to rejoice, the 100 people who attended also found joy in being together in person rather than virtually for the first time in two years. In addition to the talks, they spent time in eucharistic adoration, prayed the Divine Mercy Chaplet, went to confession, and prayed with and over each other during a healing service led by Razza, an author and psychotherapist who is a faculty member and formation adviser at St. Vincent de Paul Seminary in Boynton Beach, Florida.

The day culminated with a Mass celebrated by the second keynote speaker, Father John Verrier, pastor of St. Joseph in Brimfield and St. James in Williamsfield.

The conference theme was taken from Psalm 122:1, “Turn Your Eyes Upon Jesus.” Bishop Louis Tylka could not be present, but sent his greetings via a video message.

Father Verrier shared three reasons for why keeping our eyes fixed on Jesus is “a very good thing to do.” The first is that Jesus gazes on us — always. 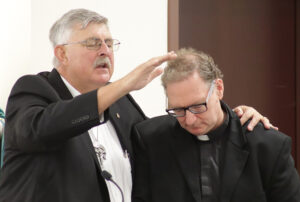 Deacon Kevin Zeeb of Blessed Sacrament in Morton and spiritual adviser to the diocese’s Charismatic Renewal Advisory Board prays over Father John Verrier before he speaks at the 36th annual Catholic Charismatic Renewal Conference on July 30. (The Catholic Post/Jennifer Willems)

“Jesus is always looking at you, with you, for you, so we should keep our eyes on him and return his gaze of love,” Father Verrier said. “It’s about relationship. When we do that it will cast out fear, because fear cripples us.”

The second reason to do that is because it will give us courage, he told conference participants.

“We need courage, courage from the Holy Spirit to overcome not just fear but our predominant fault. Everybody’s got them — sins we struggle with the most,” he said, noting that this often comes from the voice of the evil one telling us that we’re no good.

The third reason to keep our gaze fixed on Jesus is that Jesus is the image and likeness of what we are to become, he explained.

Since it isn’t possible to pray and sin at the same time, Father Verrier encouraged people to pray often, including silent mental prayer every day; going to Mass, which he called the greatest prayer there is; making a morning offering; praying the rosary and Divine Mercy Chaplet; studying the Bible; and staying close to “Mama Mary.” “The only wrong way is not to pray,” he said.

Father Verrier added some advice about prayer from Venerable Fulton J. Sheen: “Don’t do all the talking.”

Razza also talked about the crippling effects of fear and believing the lies we hear from society, social media — and the devil, who wants to keep us mute.

“We can’t know who we are if we’re carrying lies,” she said. “We are so gifted. We have so much and we’re keeping it secret.” 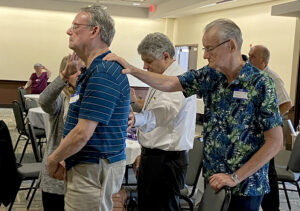 Deacon John Nelson of St. Thomas the Apostle Parish in Peoria Heights is surrounded in prayer by Angela Ham, Deacon Ed Mallow and Tom Stroot at the healing service that was part of the Catholic Charismatic Renewal Conference on July 30 at the Spalding Pastoral Center in Peoria. (The Catholic Post/Jennifer Willems)

The world needs the truth that we have, Razza said, reminding her listeners that we are called to be hope-bearers.

“We have to believe in the hope of the resurrection,” she emphasized. “If we don’t stand firm in it, we will lose it.”

Razza said too many people think they have to have their lives in order before they can do what God is asking, but that’s not true.

“He takes us where we’re at and brings us to where we need to be,” she explained.

“We don’t have to fear failure — the victory has already been won,” Razza reminded them. “Don’t pray for victory. Pray from victory.”

Returning as leader of praise and worship for the conference was Dan Dúet of San Antonio, Texas. He is the founder of Two-Twelve Ministries and has been part of every conference since 2015.

EDITOR’S NOTE: More photos from the Catholic Charismatic Renewal Conference will be posted to The Catholic Post’s site on Facebook.