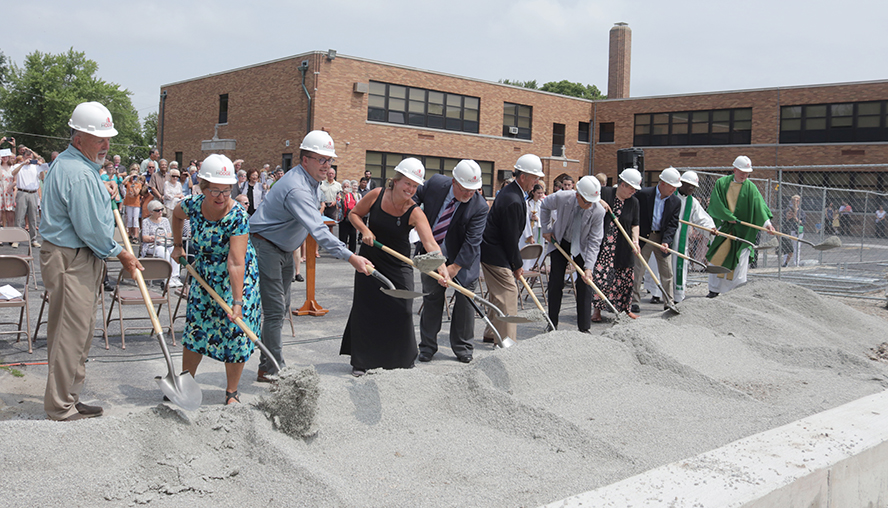 MOLINE — Remembering where they’ve been, rejoicing in where they are, and ready for what’s ahead, members of Sacred Heart Parish here broke ground for a Gathering Center last Sunday, July 17.

The ceremonial turning of dirt followed a Mass of Thanksgiving for the formal start of construction for the new building and the 40th anniversary of ordination to the priesthood for their pastor, Father Mark DeSutter. A reception followed in Culemans Fellowship Hall. 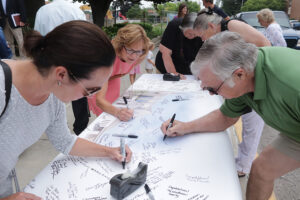 Before the Mass of Thanksgiving on July 17 at Sacred Heart Church in Moline, parishioners were invited to sign a banner marking the official start of construction for the new Gathering Center. The banner will be hung in the center when it is completed. (The Catholic Post/Jennifer Willems)

The $2,337,000 addition will provide a handicapped accessible entrance to the church, as well as accessible restrooms, a bride’s room, gift shop and gathering area over 5,000 square feet. If all goes according to plan, the community will be coming together next spring for a blessing and dedication.

Making it possible is Sacred Heart’s Today Tomorrow Together Capital Campaign, which has raised more than $3.25 million in donations from more than 620 households.

Jim Harl, who has been working on the TTT campaign for “four memorable years,” said there had been several generous gifts, but also “contributions that came with much personal sacrifice.” Among them were people who gave up vacations and donated the funds, children who contributed their allowances, and families who directed memorials to the campaign.

“These are people who will never benefit from this, but wanted to leave a legacy. . . . People who quietly, lovingly, faithfully gave to their parish,” he said in remarks at the end of the Mass of Thanksgiving.

“In the months ahead, we will walk through new doors into this sacred building. We will gather in the space that we, Sacred Heart, built,” Harl said. “All that seek to worship here will benefit from this moment in time. We will be remembered for all that we achieved, for how the good Lord blessed us with the gifts of community, fortitude, generosity and faith.”

In a letter expressing his “heartfelt congratulations,” Bishop Louis Tylka said he was grateful for the leadership of Father DeSutter, in particular with the Today Tomorrow Together Capital Campaign.

“No doubt the success of this endeavor is shared by all who dreamed of the possibility to create this space, and then set out to make that dream a reality,” the bishop wrote. “May God bring to completion the good work that he has begun in you!” 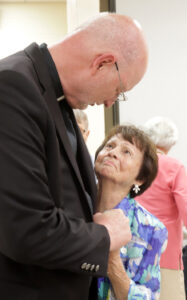 Offering a hug and good wishes to Father DeSutter for his 40th anniversary of ordination is Wilma Gaydos of Blessed Sacrament Parish, Morton. She was one of about 70 people from the Morton parish who traveled to Moline to celebrate the milestone with their former pastor. (The Catholic Post/Jennifer Willems)

The Today Tomorrow Together Capital Campaign was conducted in conjunction with Christ the King Parish, also in Moline, and Seton Catholic School, which serves the community but is located on the Sacred Heart Parish campus. Father Donald Levitt, pastor at Christ the King, joined Father DeSutter and Father Matthew Cole, SMA, parochial vicar, to concelebrate the Mass of Thanksgiving.

In his homily, Father DeSutter credited his immediate and extended Catholic family for having an influence on his vocation with their faith and high regard for priests. Some of them, including his sister, Josephine Arnold of Quincy, their uncle Maurice DeSutter of Woodhull, and cousins came for last Sunday’s celebration.

As a young man, Father DeSutter read books about priests who had admirable qualities, such as sensitivity, a desire to serve, and humanity, as well as those who were flawed. He realized that he, himself, at times fell short of his goals, but could rely on the unconditional love of God and those around him.

“As I look around this church today, I see friends who are battling chronic diseases. I see parents who have difficulties with their children. I see those who have lost spouses and live in grief. I’m also aware of those who have struggled with broken relationships and old hurts,” he said.

“When I see how others handle these setbacks in life, I’m humbled by all of that, what I witness every day,” Father DeSutter told those who filled Sacred Heart Church.

“When we come here to this eucharistic table, we come here with trust because we are the body of Christ,” he explained. “Little do we know who we touch by how we act.”

The son of Joseph and Mary Ann DeSutter, Father DeSutter was born May 25, 1955, in Kewanee. He earned a bachelor’s degree in history with a minor in philosophy from St. Meinrad College in St. Meinrad, Indiana, and completed his studies for the priesthood at St. Meinrad School of Theology, where he received a master of divinity degree.

After ordination, Father DeSutter served as a member of the Rock Island-Milan Cooperative Ministry as parochial vicar at St. Pius X, Rock Island, and then as parochial vicar at Holy Trinity, Bloomington. In addition to Sacred Heart, Moline, he was pastor at Blessed Sacrament, Morton, for 14 years, and nearly 70 members of the Morton parish traveled to Moline for the July 17 celebration. 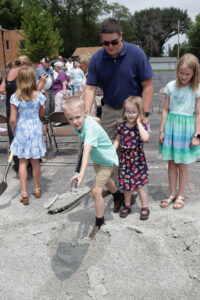 Taking his turn with the shovel is Fulton Young, while his father, Neil, keeps an eye on his progress. Looking on are his sisters Edith and Olivia. (The Catholic Post/Jennifer Willems)

Father DeSutter received an Apostolic Blessing from Pope Francis for his 40th anniversary, and the children of Sacred Heart Parish have donated a flowering tree that will be planted in his honor as part of the new landscaping.

Before the groundbreaking, Peter Murray, who represented development, fundraising and building committee teams at Sacred Heart, gave a short history of the parish, starting in September 1906, when Bishop John Lancaster Spalding assigned Father John Baptist Culemans to form a parish for the Belgian Catholics in the Moline area.

The TTT campaign was launched in January 2019, and over the last 30 months has allowed the parish to restore 34 of Sacred Heart’s stained glass windows and construct a new living space for the priests on the north side of the first floor in the Lee Parish Center.

The new Gathering Center sits on land formerly occupied by the rectory. It was designed by Streamline Architects of East Moline and Hodge Construction of Moline is bringing it to life.

After 11 parish dignitaries donned hard hats and took shovels in hand, Father DeSutter offered the final blessing. Then everyone was invited take their turn with a shovel.

“Come forward and scoop some dirt, otherwise Father Matthew will have to move all that dirt himself,” Father DeSutter quipped.

EDITOR’S NOTE: More photos from the Mass of Thanksgiving and groundbreaking have been posted to The Catholic Post’s site on Facebook.