“We will win Illinois for Life,” rally-goers say at post-Dobbs March for Life Chicago 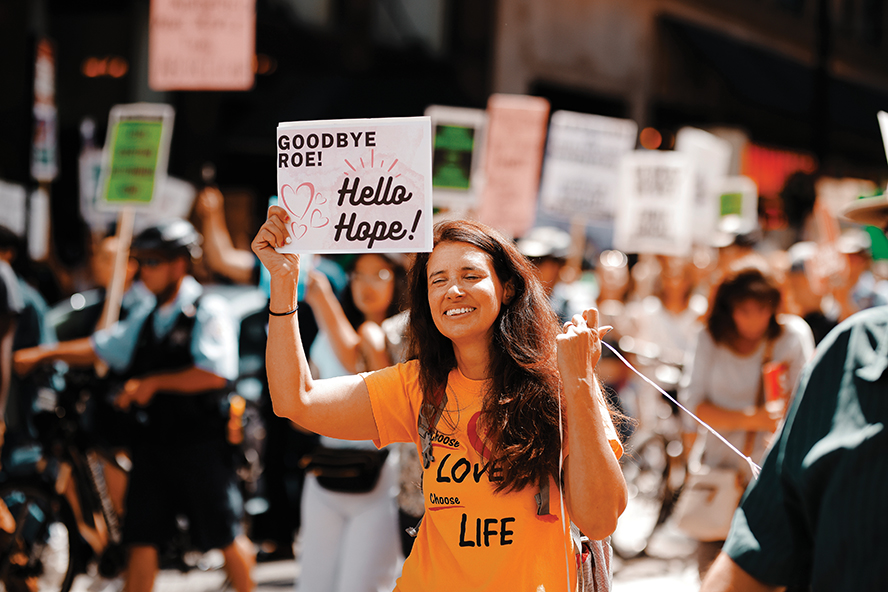 A woman makes her feelings known as she walks with hundreds of others down Michigan Avenue on July 9 during March for Life Chicago’s “Dobbs March and Rally.” The event focused on pro-life advocacy in the wake of the recent U.S. Supreme Court’s Dobbs v. Jackson Women’s Health Organization decision and the overturn of Roe v. Wade. (Provided photo/Spirit Juice Studios) 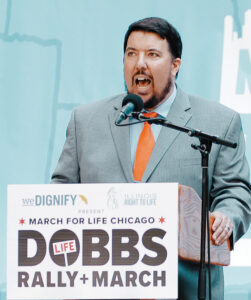 “We thank God for the ruling that overturned Roe,” said Kevin Grillot, executive director of weDignify and March for Life Chicago, in remarks to the crowd at the downtown Federal Plaza.

“But we here in Illinois must admit that other states such as Missouri, Kentucky, and North and South Dakota are showing us the right way to take care of mothers and their children,” said Grillot, the son of John and Kay Grillot of St. Patrick Parish in Washington. “Illinois needs to catch up.”

The position of Illinois Gov. JB Pritzker — who has promised the state would remain a “safe haven” for women seeking abortions and has called a special session of the General Assembly to further expand and protect what he and others term women’s reproductive rights — was repeatedly challenged by Grillot and other rally speakers.

“Gov. Pritzker, the Midwest is not a place to destroy families, it is a place to raise them,” said Grillot.

“THE TRUTH WILL PREVAIL IN ILLINOIS”

“Pro-abortion politicians are offering women nothing but abortion,” she said. “As they’ve rushed to appease the abortion industry, they’ve abandoned every choice but abortion.” Illinois Right to Life and other pro-life organizations are “committed to ensuring women have the resources they need to make life-affirming choices.”

“Today in Illinois it might seem easy to give up,” Gehrke continued. “It might seem like our state is an irredeemable haven of abortion extremism. But all of you wouldn’t be here today if you didn’t know that we can – and we will — win Illinois for Life. The truth will prevail in Illinois.”

Anna Kinskey, associate director of weDignify and March for Life Chicago, said “the fact that abortion supporters paint the Dobbs decision as harmful to women shows we have much more work to do.”

“Now is the time to offer real support to women and children — like the 95 pregnancy centers do in Illinois every single day,” she added.

EDITOR’S NOTE: A video of the rally has been archived on March for Life Chicago’s Facebook site.