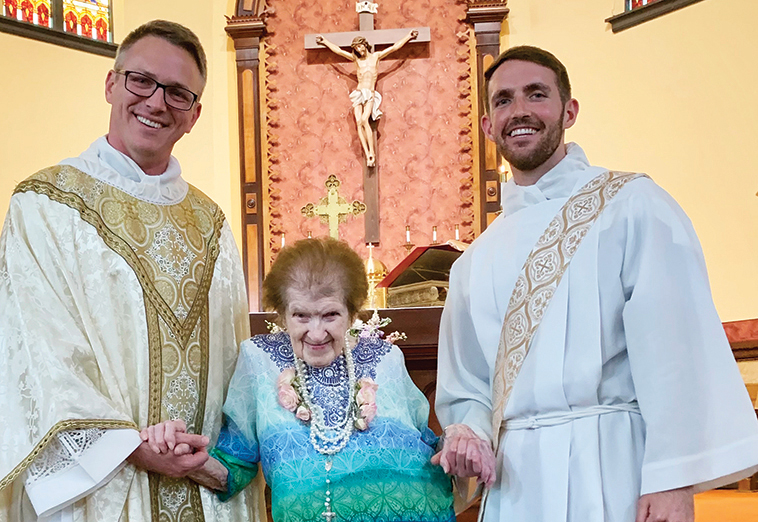 LEONORE — When you’ve had 108 birthdays, you’re entitled to make your gift requests known.

For Camilla Hopper, perhaps the oldest Catholic in the Diocese of Peoria who turned 108 on July 5, that list was short and the same as her request a year ago: a special Mass that she and about 20 members of her family could attend at Sts. Peter and Paul Church in Leonore.

Oh, and one more thing. Camilla asked that two hymns be sung, “The Prayer of St. Francis (Make Me a Channel of Your Peace)” and the “Ave Maria.”

Father Austin Bosse, parochial vicar at Sts. Peter and Paul, celebrated the Mass on Camilla’s birthday, assisted by seminarian Deacon Patrick Wille, who gave the homily. The two of them sang the “Ave Maria” for Camilla in Latin.

Deacon Wille noted how Camilla, who formerly taught in a one-room school and until recently still resided in the farmhouse she was raised in, lives with a spirit of humility. 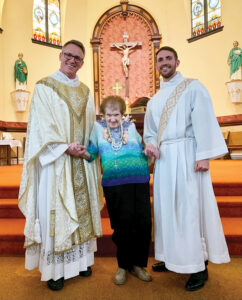 This photo of Camilla Hopper with Father Bosse and Deacon Wille taken after the Mass on her 108th birthday July 5 quickly set a record for response on The Catholic Post’s Facebook page. (Provided photo/Eliza Smith)

“You know that the Mass is the greatest gift we have ever received — the one present you wanted for your birthday,” said Deacon Wille, addressing Camilla in his homily. He recalled one of the rules she lives by is “you don’t boast.”

While Camilla doesn’t boast, facts are facts. And the truth is that a photo taken by Eliza Smith after Mass showing Camilla posed with Father Bosse and Deacon Wille has set a record for response on The Catholic Post’s Facebook page.

As of July 13,  the photo had garnered more than 1,200 “likes” or “loves” on The Catholic Post’s site alone, as well as nearly 350 “Happy Birthday” wishes. It had been shared more than 100 times and reached tens of thousands of Facebook users across the United States.

“What a beautiful way to say ‘thank you, Lord,’ for a life well lived,” said Mona Lopez, commenting after seeing the photo on her Facebook feed in Tucson, Arizona.

Janet Ahearn Heider of Streator recalled that Camilla was a longtime organist at Annunciation of the Blessed Virgin Mary Church in nearby Eagle Township, where she was a parishioner for the first century of her life until the parish closed. “She has the sweetest singing voice,” said Heider.

Others recalled that “Miss Hopper” formerly taught at St. Stephen’s School in Streator and that she is “an incredible role model” and “a true inspiration.”