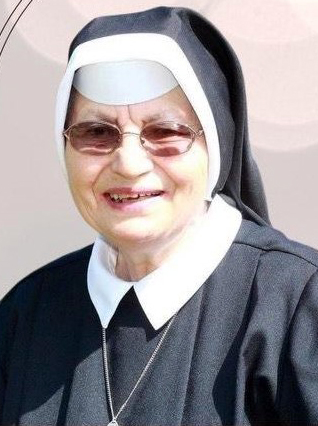 LACON — A Mass of Christian Burial for Sister M. Justina Delonga, DSF, will be celebrated on Saturday, July 9, at 11 a.m. at the motherhouse of the Daughters of St. Francis of Assisi here. Visitation will be held one hour prior to the Mass.

Burial will be in the Immaculate Conception Cemetery in Lacon.

The daughter of the late Blaz and Iva Delonga, Sister Justina was born in Kosute, Croatia, on Aug. 17, 1940. She professed her first vows with the Congregation of the Daughters of St. Francis of Assisi, American Province, on May 9, 1963.

Sister Justina served as a caregiver for her religious community from 1968 to 1989. After earning a catechetical diploma from the Catholic Distance University in Paeonian Springs, Virginia, she ministered as a CCD teacher in Lacon from 1990 to 1991, and in Princeville from 1992 to 1994.

She also earned a diploma in child day care from the International Correspondence Schools of Scranton, Pennsylvania.

In addition, Sister Justina’s assignments took her to St. Francis Hospital in Mountain View, Missouri, from 1995 to 1996; parish ministry in Davenport, Iowa, from 1996 to 1999; and as a certified nursing assistant at St. Joseph’s Home of Lacon from 2000 to 2005. More recently, she had been a volunteer at St. Joseph’s (now Lacon Rehab and Nursing) and caregiver to her Franciscan Sisters.

Preceded in death by her brother, Stipe Delonga, Sister Justina is survived by a sister, Angela, and a brother, Jakov Delonga, and the Daughters of St. Francis of Assisi.