An artist's rendering of the Gathering Center planned for Sacred Heart Parish in Moline. Groundbreaking for the $2,237,000 church addition is scheduled on Sunday, July 17.

The first is the 40th anniversary of Father Mark DeSutter’s ordination to the priesthood. The pastor at Sacred Heart since 2014, he will be honored by parishioners and friends at a Mass of Thanksgiving at 11 a.m.

The second reason for joy is the groundbreaking ceremony for the new Gathering Center after Mass. The $2,337,000 church addition was made possible by the success of the Today Tomorrow Together Capital Campaign.

The son of Joseph and Mary Ann DeSutter, Father DeSutter was born in Kewanee on May 25, 1955. He earned a bachelor’s degree in history with a minor in philosophy from St. Meinrad College in Indiana, and completed his studies for the priesthood at St. Meinrad School of Theology, where he received a master of divinity degree in 1982. 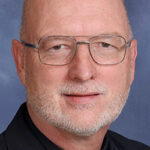 In addition to Sacred Heart, Father DeSutter has served as a member of the Rock Island-Milan Cooperative Ministry as parochial vicar at St. Pius X, Rock Island, and then as parochial vicar at Holy Trinity, Bloomington. He was chaplain at St. John’s Catholic Newman Center in Champaign and St. Francis of Assisi Catholic Newman Center in Macomb, before being named pastor at Blessed Sacrament Parish in Morton in 2000.

Father DeSutter is credited as being the driving force behind the capital improvements accomplished through the Today Tomorrow Together campaign, which has raised more than $3.2 million. Totaling $1.3 million, those improvements include exterior tuck pointing, restoration of the church’s stained-glass windows, replacing the heating and air conditioning in the Lee Parish Center, and demolishing the former rectory and renovating the first floor of the Lee Parish Center into living space for the priests.

The 5,000-square-foot addition will be adjacent to the church. Plans call for a covered handicapped accessible entrance and accessible restrooms, a bride’s room, gift shop and gathering area.