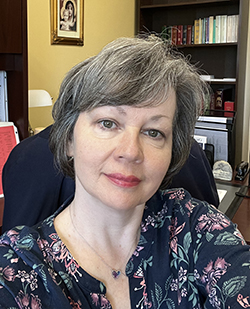 "It's been an honor," said Laurie Ullrich of her 23 years serving on the diocesan staff, including the last 14 years as an administrative assistant in the Office of the Bishop and Chancery Office. (Provided photo)

She hung up the phone for the last time on June 17, however, to accept a new job at Versa Press Inc., where she will work in customer service.

“It’s been an honor,” Ullrich told The Catholic Post. “It’s hard to leave something that is tied to your faith.”

“It’s been an honor. It’s hard to leave something that is tied to your faith.”

Some of the most memorable moments have come in the course of her work to assist Msgr. Stanley Deptula and Msgr. Richard Soseman on the sainthood cause for Venerable Archbishop Fulton J. Sheen. She was one of the people commissioned to take dictation if it was needed for those with alleged miracles and she eventually managed the file kept by Jane Peverly of the Sheen Foundation.

“That was a humbling thing for me to be part of a saint’s cause,” Ullrich said. “For me, that’s a biggie.”

She said she was also humbled to work with Bishop John J. Myers, Bishop Daniel R. Jenky, CSC, and Bishop Louis Tylka, and assist them “in any of their needs and just the normal day-to-day stuff that you have to do just being in the office.”

“It was a blessing. I consider it a blessing,” Ullrich said.

From her days in the Office of Vocations, she got to know the seminarians who are now valued priest-friends around the Diocese of Peoria.

“Priests are very important to me,” she said, and they obviously feel the same about Ullrich. More than one floral arrangement was sent to her in her final days at the Chancery Office. 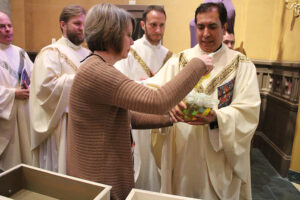 Laurie Ullrich hands holy oils to Father Fredi Gomez Torres following the 2019 Chrism Mass at St. Mary’s Cathedral. “Priests are very important to me,” she said after having worked with many of them during her 23 years with the diocesan Curia. (The Catholic Post/Jennifer Willems)

“But the tributes and some of the things that have been coming in have been from ones that you wouldn’t expect, which I thought was very dear and sweet,” she said.

Ullrich admitted that when she started working for the Office of Divine Worship in 1995, “I was kind of a newbie.”

“You know your faith — or you think you do. But I’ve learned so much more,” she said. “They would mention a church term and I would ask, ‘What are you talking about?’ and then they would explain it to you. So there was a teachable moment there. So I learned.”

Not only was that growth part of the job, but it was important to her in terms of faith, Ullrich shared.

“It’s part of knowing and loving and serving,” she said.

IT’S IN THE BLOOD

Those are three things Ullrich witnessed from her parents, Rose and Donald Hansen, as she was growing up in Rutland. Mrs. Hansen would take care of things for the cemetery and served as CCD coordinator and together the couple would open the doors for the visiting priests at Sacred Heart Church when the pastor was on vacation and assist in any way they could.

Until COVID-19, Mrs. Hansen would often come to St. Mary’s Cathedral in Peoria for the Chrism Mass and help Ullrich and Cheryl Berkshier, another administrative assistant in the Office of the Bishop, to distribute the holy oils to the priests.

Ullrich moved to the Metamora area after marrying her husband, Bill, in 1984. They have a son, Matt Ullrich, in East Peoria, and a daughter, Rachel Bare, in Metamora, as well as six grandchildren.

A former Marine, Bill Ullrich served for 20 years as a handyman for Bishop Jenky, St. Mary’s Cathedral, the Franciscan Apostolic Sisters and the Missionaries of Charity, among others. He retired in February.

What has been the hardest thing for Laurie Ullrich to leave?

“The people. It’s the people and the working relationships that you have,” she said.