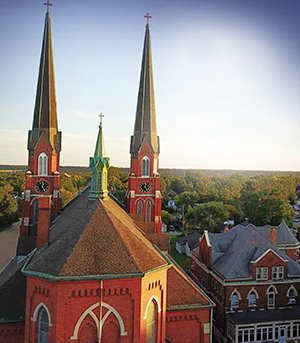 LASALLE — St. Hyacinth Parish has launched a $1.8 million capital campaign to fund a major renovation of its church.

An overview of the project was given to parishioners during a program that followed a meal Saturday night at The Auditorium Ballroom.

“The projects that this campaign will fund are not only very urgent and necessary repairs to our spiritual home, but will also expand our outreach and appeal so that we can continue to grow,” wrote Father Thomas Otto, pastor, in a casebook distributed at the launch event.

Among the planned improvements to what Father Otto called “our breathtakingly beautiful church building,” built in 1890, are:

The project overview was given by Dan Rigali of Daprato Rigali Studios of Chicago.

The capital campaign began following the advice of a feasibility study committee and the recommendation of Joseph Consulting of Bettendorf, Iowa. It will continue through the summer, with work expected to begin within the next year.

Serving as master of ceremonies for the launching event was Father Chase Hilgenbrinck, diocesan vocation director of recruitment. Four families offered their endorsement of the project, including Steve and Linda Wroczynski, Deacon Gabriel and Diana Guerrero, Sergio and Martha Sanchez, and Gerald and Patricia Waszkowiak.

Thirteen members of the parish will serve as general chairs for the campaign.

The present Gothic-style church is the second to serve the faith community. The first church, built in 1875 to serve newly arriving Polish Catholic families, was destroyed by fire on the Sunday after Christmas in 1890.

The capital campaign materials are offered in both English and Spanish, reflecting the parish’s present membership.

Father Otto noted St. Hyacinth Church has seen many renovations and updates in the last century.

“We are now in need to once again make the necessary improvements to secure our church for future generations,” he said. The capital campaign was jump-started by a $600,000 gift from an anonymous donor.