To senior status: Fr. Vien Van Do prayed for one Mass, God granted him 16,000 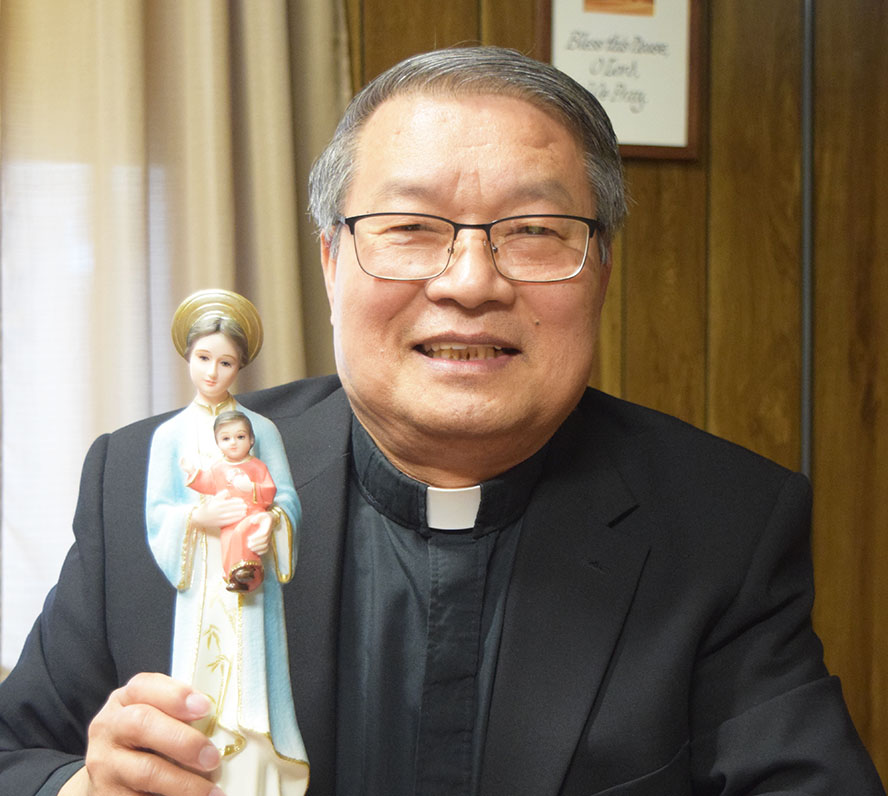 Father Vien Van Do holds a statue of Our Lady of Lavang given to him by the Altar and Rosary Society when he served at St. John the Baptist Parish in Bradford. He says God saved his life through the Blessed Mother’s protection on several occasions. “I carry her in my heart,” he adds. (The Catholic Post/Tom Dermody)

METAMORA — In pain from being beaten in a Vietnamese communist concentration camp, seminarian Vien Van Do repeatedly prayed the rosary through the night with one intention.

“Lord, heal me,” he prayed, “so I can go home and be ordained a priest in secret even for one day only and say one Mass, uniting all my pains and sufferings, humiliations, and starvations with those of yours in the chalice as my offering to God.

“That would be more than enough for me.”

God would answer the prayer. And on June 15, after celebrating more than 16,000 Masses while serving 13 parishes in the Diocese of Peoria, Father Vien Van Do is being granted senior status.

“It’s amazing,” he told The Catholic Post in a recent interview. “God is so generous.”

Father Do, 71, will be honored at a reception from 2 to 4 p.m. this Sunday, June 5, at St. Mary School in Metamora. He has been either parochial vicar or administrator of St. Mary Parish as well as St. Mary of Lourdes Parish in Germantown Hills for seven years.

FROM SUFFERING TO GRATITUDE

How Father Do survived in the concentration camp, later fled Vietnam in a small boat with 23 other occupants, and went on to decades of priestly service in the United States could fill a book. In fact, friends and parishioners have said he should write one.

But the Holy Spirit’s hand has written an amazing story through Father Do’s life and ministry — a story that leads from suffering to gratitude, with faith a constant in every chapter.

“Where I have been successful it is by God’s grace and through the intercession of Mary and St. Joseph.”

Born in Phuong Tay in Hue Province of Vietnam, Father Do had completed seven years of high school seminary and was studying theology at major seminary when the communists took over South Vietnam. The seminarians were dispersed, and Father Do was falsely accused of crimes and sent to a mountainside concentration camp for three and a half years.

“We were forced to work like a buffalo, but were fed like a mouse,” he recalls. “Where I have been successful it is by God’s grace and through the intercession of Mary and St. Joseph.”

It would take several more years, additional narrow escapes from death, and learning a new language in a land nearly 10,000 miles away, but that hunger was satisfied.

32 YEARS A PRIEST IN OUR DIOCESE

After escaping to Hong Kong by boat, seminarian Do was connected to the Diocese of Peoria through Msgr. Jerome Ham, who was from his native archdiocese in Vietnam and was then serving as pastor of the former St. Mary Parish in Naplate, near Ottawa. He was accepted as a seminarian for this diocese and, just six weeks after arriving in the U.S., began studies at Holy Apostles Seminary in Cromwell, Connecticut.

“Where I have been successful it is by God’s grace and through the intercession of Mary and St. Joseph.”

Following ordination he served as parochial vicar at Immaculate Heart of Mary, Galesburg, for four years and was named pastor of St. Elizabeth, Thomasboro, and Sacred Heart, Ludlow, in 1994. He has also been pastor of St. Philomena, Monticello, and St. Michael, Bement; and parochial vicar at St. Anthony, Streator; St. Philomena, Peoria; and Sacred Heart, Moline.

“Every place I have been there have been a lot of great people, wonderful people, generous people,” said Father Do. As two recent examples, he cites “being moved to tears” at the generosity shown in Metamora to support the parish school — where enrollment is on the rise — and in Germantown Hills to finance a church expansion.

He has also found joy in bringing fallen-away Catholics back to the church.

“I am not afraid to share the Good News,” says the priest who was imprisoned for the “crime” of evangelization. “Where I have been successful it is by God’s grace and through the intercession of Mary and St. Joseph.”

After retirement, Father Do will live in the rectory of the Shrine of the Queen of the Holy Rosary in LaSalle.