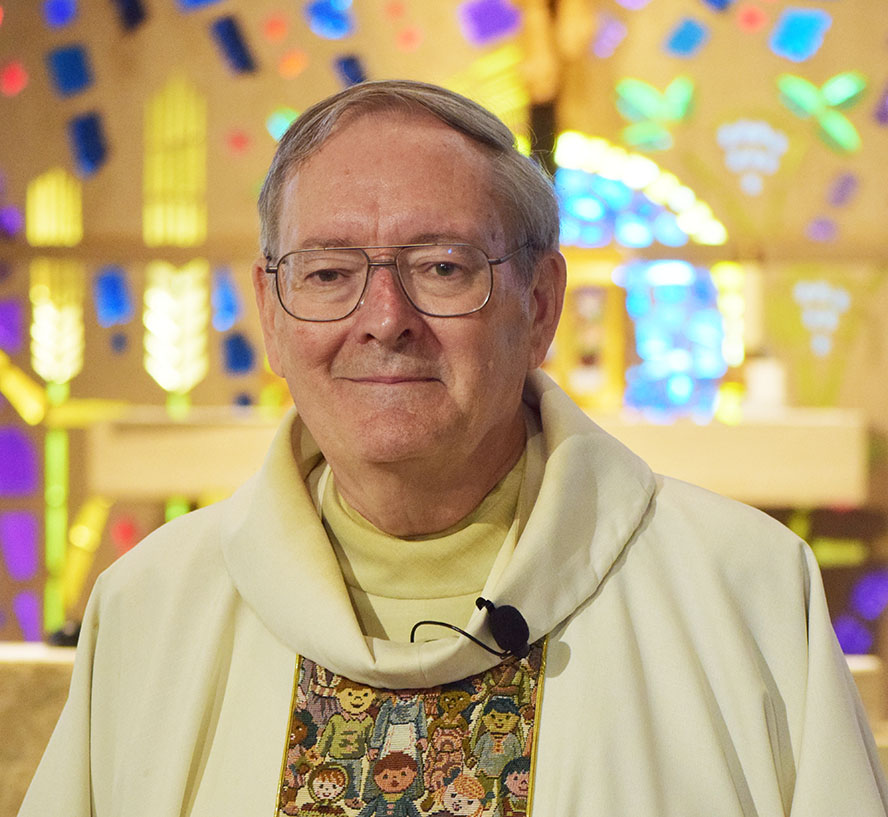 Father Thomas Taylor, parochial vicar of St. Vincent de Paul Parish since 2016 and a priest of the Diocese of Peoria for nearly four decades, has been granted senior status effective June 15. (The Catholic Post/Tom Dermody)

When Father Thomas Taylor preaches at all the Masses at St. Vincent de Paul Church in Peoria on June 11-12 — his final weekend at the parish before transitioning to senior status the following Wednesday — he will be juggling many emotions.

But that’s not all Father Taylor will be juggling. After all, it’s Trinity Sunday.

For decades, the priest, an accomplished juggler, has stepped away from the ambo on Trinity Sunday and juggled three balls, explaining the three persons of the Trinity with different techniques.

“It’s very visual,” said Father Taylor of the unusual homily introduction. While the action has “slightly scandalized” a few parishioners through the years, he says with a bit of a grin, there are “ten times more who thought it was good.” 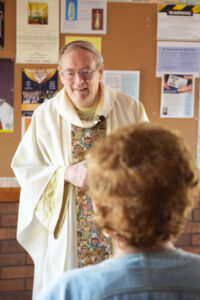 Father Taylor greets parishioners after Mass at St. Vincent de Paul Church in Peoria on May 29. (The Catholic Post/Tom Dermody)

The goodness of Father Taylor’s 39 years of active priesthood will be recognized and celebrated at a reception following the 11 a.m. Mass on Sunday, June 12, at St. Vincent de Paul, where he has been parochial vicar since 2016.

But even as retirement approaches, Father Taylor — who turns 70 in September — has had to juggle his plans. At the request of the diocese, he will be at St. Pius X Parish in Rock Island from June 15 to Aug. 1, filling in until Conventual Franciscan priests arrive to serve the three Rock Island parishes. After that?

“Where I wind up, that’s still up in the air,” he says. There will certainly be a trip to South Dakota to spend time with his 92-year-old mother and two aunts who are in a nursing home. Father Taylor also looks forward to visiting friends in Minnesota.

Pulling up stakes and moving is nothing new for Father Taylor, whose father was in the Air Force. Born in Wroughton, England, Father Taylor was raised on bases in six locations before his father retired to Princeton as he was entering his senior year of high school.

A couple of years later, while studying accounting at Illinois State University, four words from Msgr. James Garrahan, a visiting priest at the Princeton parish, would change Father Taylor’s life.

After prayer and discussion with then parish pastor Father Richard Kolczaski, “I decided I had to at least give it a try.” Father Taylor transferred to St. Ambrose College in Davenport, spent a semester at North American College in Rome, and eventually completed his preparation for the priesthood at St. Paul Seminary in St. Paul, Minnesota.

After initial assignments as parochial vicar at Holy Cross in Mendota and Epiphany in Normal, Father Taylor felt a calling to return to Air Force life as a chaplain. During a four-year stint, he would not only be stationed in North Dakota and England, but also had “paid vacations” in tents on the Turkey-Iraq border after the first Gulf War and beside a runway in South Korea.

Father Taylor has been a pastor for only two brief stints — in 1992 at St. John, Woodhull, and St. John, Galva, and in 1996 at St. John the Baptist, Bradford. The rest of his priestly service has been as parochial vicar at Holy Family, Lincoln, and St. Mary, Atlanta (twice); St. Columba, Mason City; St. Thomas the Apostle, Peoria Heights, his longest assignment at 12 years; and St. Vincent de Paul, Peoria. While in Lincoln he served as chaplain of the Lincoln Correctional Center, “a unique ministry that I enjoyed.”

Father Taylor has “special memories” from teaching and other activities at the Catholic schools in five of the parishes he has served. An expert chess player — he has played in tournaments in 49 states — Father Taylor started a chess club in all five schools. He has kept score at basketball games for five decades, and been active in youth ministry.

“What people need is to know that they have a God who loves them and forgives them.”

While his shyness, especially the thought of having to give homilies, almost kept Father Taylor from considering the priesthood, his heartfelt, gentle manner has made him a popular choice for weddings and funerals. Among his most memorable homilies were for the 50th jubilee and later the funeral Mass for Msgr. William Watson, with whom he served at St. Thomas for 11 years, and the funeral Mass in 2007 for four-star U.S. Army General Wayne Downing.

“I understand that sacrament a lot better now,” he told The Catholic Post. “What people need is to know that they have a God who loves them and forgives them. I always knew that, but it has become more a part of me now.”

Asked his favorite Scripture passage, Father Taylor quoted Matthew 11:25-30 from memory. It includes Jesus’ words “Come to me, all who are weary and find life burdensome, and I will refresh you.” It was the Gospel reading at his first Mass after ordination as a deacon.