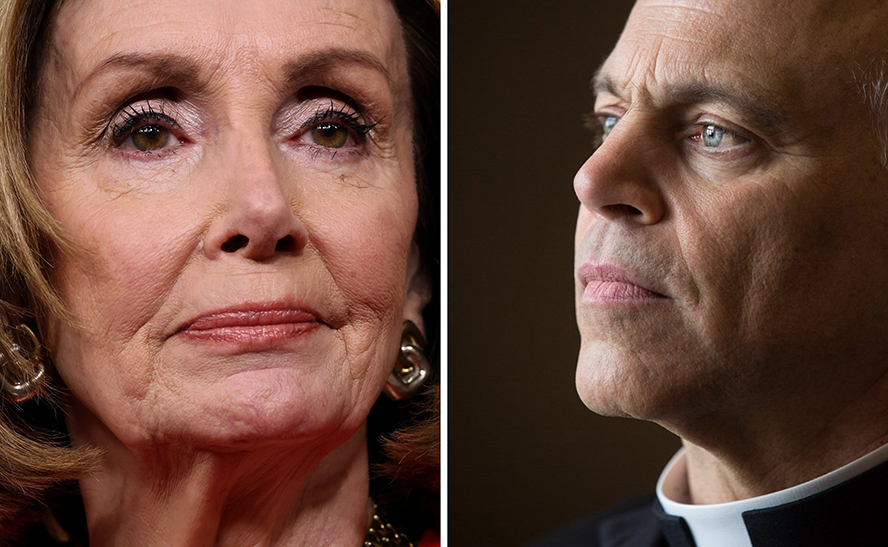 WASHINGTON (CNS) — San Francisco’s archbishop declared May 20 that House Speaker Nancy Pelosi, D-Calif., is not “to be admitted” to Communion unless and until she publicly repudiates “support for abortion ‘rights'” and goes to confession and receives absolution “for her cooperation in this evil.”

Archbishop Salvatore J. Cordileone said he decided to make this declaration “after numerous attempts to speak with her to help her understand the grave evil she is perpetrating, the scandal she is causing and the danger to her own soul she is risking” as a Catholic who supports legalized abortion.

Pelosi represents California’s 12th Congressional District, which is entirely within San Francisco. A call to Pelosi’s Washington office from Catholic News Service to request a comment was not returned immediately.

“Please know that I find no pleasure whatsoever in fulfilling my pastoral duty here,” Archbishop Cordileone said. “Speaker Pelosi remains our sister in Christ. Her advocacy for the care of the poor and vulnerable elicits my admiration. I assure you that my action here is purely pastoral, not political. I have been very clear in my words and actions about this.”

THE POPE AND PELOSI

The archbishop opened his 1,300-word letter by saying that Pope Francis “has been one of the world’s most vocal advocates of human dignity in every stage and condition of life.”

“He decries what he evocatively calls the ‘throwaway culture,'” Archbishop Cordileone said. “There can be no more extreme example of this cultural depravity than when direct attacks on human life are enshrined in a nation’s law, celebrated by society, and even paid for by the government.” 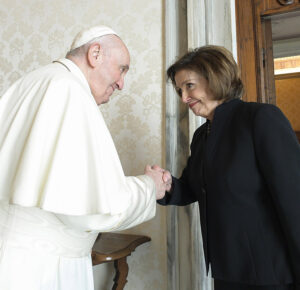 “This is why Pope Francis, as much as any pope in living memory, has repeatedly and vividly affirmed the church’s clear and constant teaching that abortion is a grave moral evil,” he said.

Last October, Pelosi met privately with Pope Francis at the Vatican while she was in Rome to speak at a meeting of legislators from around the world in preparation for the U.N. climate summit.

The Vatican released photos of the meeting but provided no details of the encounter. A photo of the pope and Pelosi from that visit is on the homepage of her congressional website.

Pelosi said in a statement it was “a spiritual, personal and official honor” to have an audience with the pope.

“His Holiness’ leadership is a source of joy and hope for Catholics and for all people, challenging each of us to be good stewards of God’s creation, to act on climate, to embrace the refugee, the immigrant and the poor and to recognize the dignity and divinity in everyone,” her statement said.

POSTION “HAS BECOME ONLY MORE EXTREME”

Archbishop Cordileone said he is bound by canon law to be “concerned for all the Christian faithful entrusted” to his care.

He added that over the years he has heard from many Catholics “expressing distress over the scandal being caused by such Catholics in public life who promote such grievously evil practices as abortion.”

In September, Archbishop Cordileone asked Catholics in the archdiocese to pray for Pelosi on abortion. What prompted the call for prayer was her leadership on the Women’s Health Protection Act, or H.R. 3755, passed by the House in a 218-211 vote Sept. 24.

The measure establishes the legal right to abortion on demand at any stage of pregnancy in all 50 states under federal law. The bill was pushed forward over fears by abortion supporters the Supreme Court will overturn Roe v. Wade in its decision on a Mississippi ban on abortion after 15 weeks. The measure failed to advance to a full vote in the Senate May 11.

Pelosi considers abortion health care and, as recently as May 13 in remarks on the steps of the U.S. Capitol, she warned the Supreme Court to keep its “hands off women’s reproductive health care.” She also said if Roe is overturned, Republicans have a “dangerous and extreme agenda” that could see “an all-out assault” on more rights.

Pelosi’s position on abortion “has become only more extreme over the years, especially in the last few months,” Archbishop Cordileone said. “Just earlier this month she once again, as she has many times before, explicitly cited her Catholic faith while justifying abortion as a ‘choice,’ this time setting herself in direct opposition to Pope Francis.”

“Conversion is always better than exclusion, and before any such action can be taken it must be preceded by sincere and diligent efforts at dialogue and persuasion,” Archbishop Cordileone wrote.

If the person in question still presents himself or herself to receive the Eucharist, “the minister of Holy Communion must refuse to distribute it,” he said, quoting canon law.

POPE’S PAST COMMENTS ON THE TOPIC

Aboard the papal flight from Slovakia Sept. 15, Pope Francis said he did not want to comment directly on the issue of denying Communion in the United States “because I do not know the details; I am speaking of the principle” of the matter.

However, he said that while there is no question that “abortion is homicide,” bishops must take a pastoral approach rather than wade into the political sphere.

“If we look at the history of the church, we can see that every time the bishops did not act like shepherds when dealing with a problem, they aligned themselves with political life, on political problems,” he said.

He also said he never denied Communion to anyone, but he “never aware of anyone in front of me under those conditions that you mentioned.”

Recalling his apostolic exhortation, “Evangelii Gaudium,” the pope said that “Communion is not a prize for the perfect,” but rather “a gift, the presence of Jesus in his church and in the community. That is the theology.”

However, Pope Francis also said he understood why the church takes a hard stance because accepting abortion “is a bit as if daily murder was accepted.”