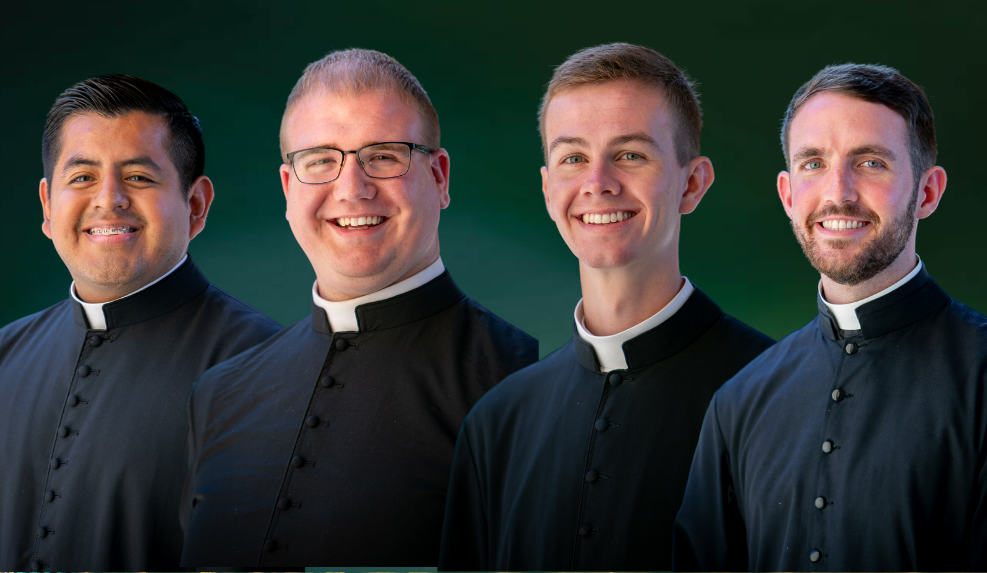 The four seminarians of the Diocese of Peoria to be ordained transitional deacons on Saturday, May 21, are, from left, Ignacio Cárdenas Morán, Nathan Hopper, Daniel Dionesotes, and Patrick Wille. (Composite photo/Office of Priestly Vocations)

Four seminarians of the Diocese of Peoria will take the next step toward the priesthood when they are ordained as transitional deacons on Saturday, May 21, at St. Mary’s Cathedral in Peoria.

The Mass will be celebrated at 10:30 a.m. by Bishop Louis Tylka. The public is invited, and the liturgy will be livestreamed on the Diocese of Peoria’s channel on YouTube.

The four seminarians have all completed their third year of theology studies at Mount St. Mary’s Seminary in Emmitsburg, Maryland. They include:

“All of them had to deal with the COVID situation in seminary, which certainly was not normal, but they also had other challenges,” said Father Henehan, who will be among the principal concelebrants of the ordination Mass along with Father Chase Hilgenbrinck, vocations director of recruitment.

For example, Cárdenas Morán first attended seminary in Mexico. When he was introduced to the Diocese of Peoria by family here and expressed interest in becoming a diocesan seminarian, he first spent a year in the English as a Second Language program at Heartland Community College in Normal and began adapting to a different culture. Meanwhile, Hopper entered into formation “while battling with physical struggles dealing with vision issues,” said Father Henehan, and Wille transferred dioceses (from Chicago to Peoria) and thus changed seminaries while in formation.

“Their ability to adapt and change, while trusting in our Lord, will prove them well in their service to the church and is edifying for me personally,” said Father Henehan of all four candidates.

Both excited and grateful as their diaconate ordination approaches, the seminarians also asked for prayers.

“Please pray that I may always be open to the grace of the Holy Spirit to act as a willing instrument of God’s love and mercy,” said Wille.

While acknowledging the growth still needed before his priestly ordination in 2023, Hopper said “I am excited beyond words at the chance to begin ministry in the church by preaching the word of God and baptizing people into the family of the church.”

Cárdenas Morán said that while his parents cannot attend the ordination Mass, they will watch the livestream from Mexico. “I know they are proud of me and that their prayers will be with me during this important day,” he told The Catholic Post.

“It’s surreal to think that the past five years of seminary have flown by so fast,” said Dionesotes. “But there is a lot of peace and excitement to know that God has brought me to this point through His grace and that he will continue to exceed my expectations throughout my life as an ordained man.”

The seminarians, who anticipate ordination to the priesthood in 2023 after a final year of seminary preparation, are expected to learn their summer assignments later this week.