Men’s March was brief, but its lessons lifelong for ‘beloved sons of the Father’ 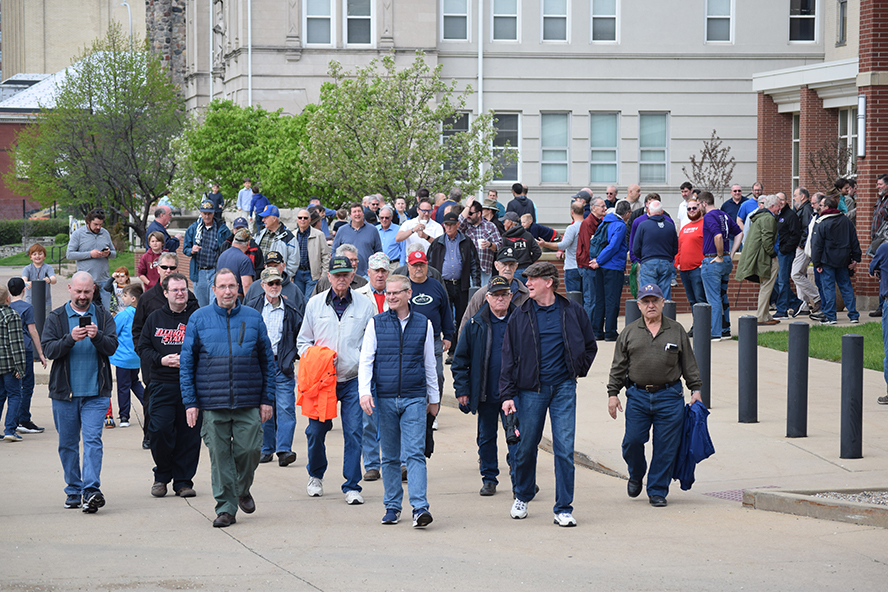 Nearly 200 men and boys taking part in "A Call to Catholic Men of Faith" leave the Spalding Pastoral Center in Peoria for a short walk to St. Mary's Cathedral for Mass. The threat of thunderstorms forced the pre-march rally indoors this year and shortened the usual one-mile walk through downtown that normally begins on the banks of the Illinois River. (The Catholic Post/Tom Dermody)

Before the briefest of marches on April 30, about 200 men were given a truth to remember throughout life’s long journey: their true identity as “baptized, beloved and blessed” sons of God the Father. 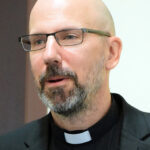 “I think men today are largely confused and discouraged about their place and their role,” said Father Charles Klamut, pastor of St. Anthony Parish in Bartonville and rally speaker at “A Call to Catholic Men of Faith.” They feel “the pressure to earn, to succeed, to perform, to be both strong and secure,” he said, “but also tender and compassionate,” all in a culture where gender roles “are up for grabs” and manhood may be viewed with hostility and suspicion.

Father Klamut encouraged Catholic men to “take hold of the great treasure you’ve been given — to be a baptized, beloved, and blessed son of the Father, in Jesus Christ our Lord and dear savior.” And he urged them to live from God’s approval, not work for it. 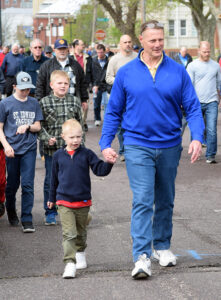 Greg Franich and his son, Patrick, of St. John the Baptist Parish in Rapids City join 200 others walking to the cathedral for Mass with Bishop Tylka.  (The Catholic Post/Tom Dermody)

“Our sonship has to be our starting point and our True North,” said Father Klamut. Through Jesus and our own baptism, he said, we should hear God the Father say to us the words he spoke at Jesus’ baptism: “This is my beloved son, in whom I am well pleased.”

It was the first time since 2019 that the annual gathering of men from across the Diocese of Peoria — known informally as the Men’s March and Mass — had taken place because of the COVID-19 pandemic.

The event traditionally begins on the banks of the Illinois River in downtown Peoria, with the men then walking a one-mile route to St. Mary’s Cathedral in a public witness to faith and family, but a threat of thunderstorms moved the pre-march rally indoors to the Spalding Pastoral Center. As a result, the “march” was a two-block walk to the cathedral for Mass with Bishop Louis Tylka.

“It worked out,” said Patrick Clavey, 24, who drove from Champaign to take part in the Men’s March with his younger brother, Chris, a sixth-grader at St. Matthew School in Champaign. “We got in the most important parts.”

In welcoming remarks, emcee Deacon Mike Schallmoser of St. Philomena Parish in Peoria asked those who were taking part in the Men’s March for the first time to raise their hands. Among the dozens doing so was Bishop Tylka.

“I’m very grateful that this year we get to do the Men’s March, but of course Mother Nature didn’t cooperate with us,” said the bishop before leading an opening prayer. “Long ago as a pastor I learned that when they give you credit for good weather you take it, because when you get bad weather they’re going to blame you for not praying hard enough.” 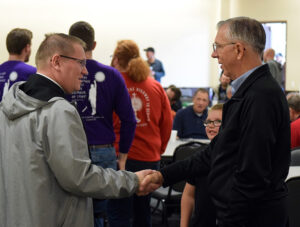 Bishop Tylka greets Andy Wujek of Sts. Peter and Paul Parish in Peterstown during the pre-march rally at the Spalding Pastoral Center in Peoria. Wujek said the two spoke about evangelization. (The Catholic Post/TOm Dermody)

In his homily at the morning Mass, Bishop Tylka reflected on the Gospel reading of Jesus’ disciples being caught in a storm on a lake. He linked his message with the relationship guidance given the men earlier by Father Klamut.

“We know there will be winds that blow against the boat, as the disciples encountered,” he told the men. “But when we recognize that we are sons of the heavenly Father . . . Jesus will always come up to the boat and get us where we need to go because we are beloved, we are blessed, we are sons, and we are fathers. We are brothers.”

The morning began with coffee and doughnuts served by the men’s group from Holy Family Parish in Peoria, and concluded with a fellowship lunch at the Spalding Pastoral Center.

EDITOR’S NOTE: More photos from the Men’s March have been posted to The Catholic Post’s site on Facebook.