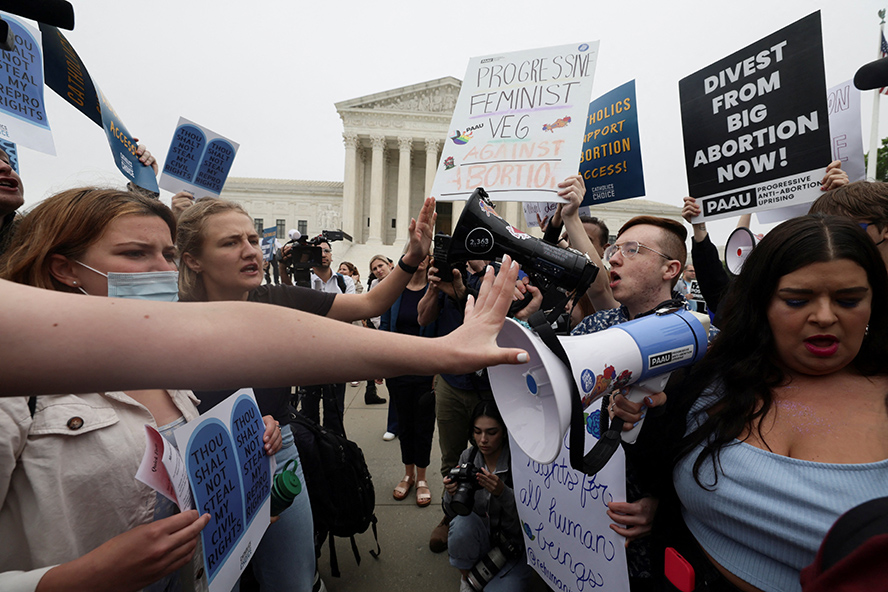 Abortion demonstrators in Washington are seen outside the U.S. Supreme Court on May 3 after the leak of a draft majority opinion written by Justice Samuel Alito preparing for a majority of the court to overturn the landmark Roe v. Wade abortion rights decision later this year. (CNS/Evelyn Hockstein, Reuters)

A mother’s womb is a quiet place, but the noise surrounding a leaked draft of a U.S. Supreme Court opinion indicating a willingness to overturn Roe v. Wade is loud and growing louder. Expect the noise to increase, including protests in the streets that will be covered by the national media — unlike when 100,000 or more gather for the annual March for Life.

Here’s what we have to say about the 1973 landmark case legalizing abortion through all nine months of pregnancy:

As Bishop Louis Tylka said in a homily at a Mass for Respect Life in January, there is no shortage of challenges when it comes to promoting and defending the sacredness of human life from conception to natural death.

Quiet is nice, but we much prefer an even messy, noisy debate to silence and indifference as hundreds of thousands of innocent unborn children die violent deaths each year in the United States. But pro-life proponents would do well in the coming days and weeks to embrace the “Four C’s of Respect Life” that Bishop Tylka advocated back in January. Let’s be convicted in our belief, convincing in our respectful dialogue, consistent in our message, and compassionate, especially to those who don’t believe what we believe or understand what we understand.

And to Bishop Tylka’s list we’ll add a “P” — pray, for the Supreme Court, for mothers in need, for our nation, and for conversion of hearts. — Thomas J. Dermody