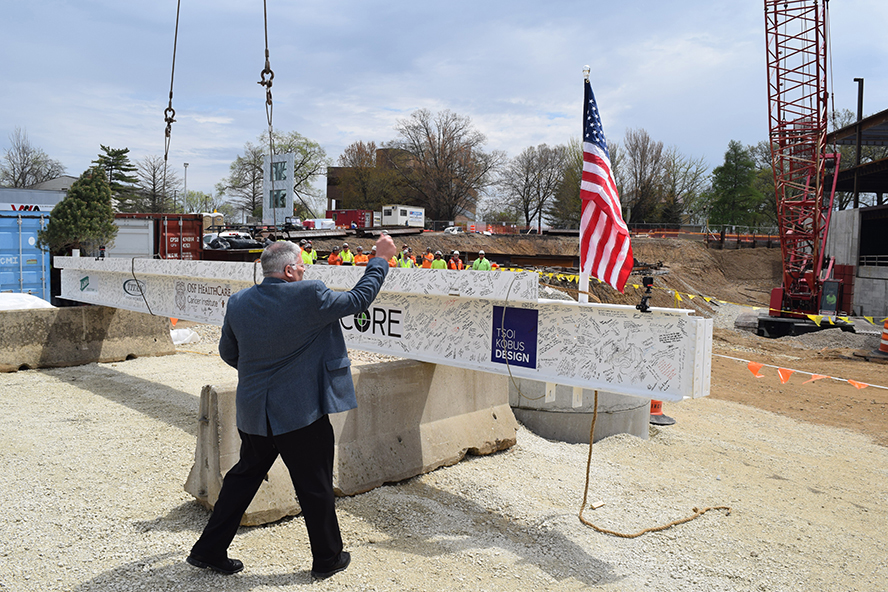 Deacon Joe Knapp sprinkles holy water on the final steel beam of the OSF HealthCare Cancer Institute before it is hoisted by crane to its place atop the construction site in Peoria on April 25. Deacon Knapp is manager of pastoral care at OSF HealthCare Saint Francis Medical Center. (The Catholic Post/Tom Dermody)

Sprinkled with holy water and bearing signatures and messages from hundreds who are invested in the project it symbolizes, the final structural steel beam of the OSF HealthCare Cancer Institute was lifted and set into place during ceremonies in Peoria on April 28. 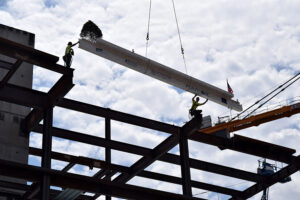 Workers guide the final steel beam to its location atop the OSF HealthCare Cancer Institute in Peoria during “topping off” ceremonies at the construction site on April 28. (The Catholic Post/Tom Dermody)

“The Cancer Institute is, and always will be, a reminder of how much God loves and cares for his people,” said Sister Judith Ann Duvall, OSF, major superior of The Sisters of the Third Order of St. Francis and chairperson of the boards of OSF HealthCare. She was among several speakers at a “topping off” event that took place at the construction site for the $237 million project on the campus of OSF HealthCare Saint Francis Medical Center.

Beneath a tent next to the massive building taking shape, Sister Judith Ann recalled the humble beginnings of the health care ministry established 144 years by pioneer members of her religious community and added, “I can only imagine what our founding Sisters must think.”

The “topping off” ceremony is a long tradition in the construction industry, but this one had some twists.

For example, in addition to bearing the traditional evergreen tree and U.S. flag — symbols of growth and good fortune — the beam hoisted high by crane also had a Franciscan cross attached to reflect the mission, vision, and values of OSF HealthCare.

“It’s a reminder of where we started, and where we’re going,” said Bob Sehring, chief executive officer of OSF HealthCare, who also spoke at the ceremony. 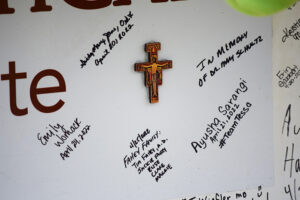 A small but significant symbol found among the signatures on the final steel beam of the OSF HealthCare Cancer Institute is a Franciscan cross symbolizing the mission, vision and values of The Sisters of the Third Order of St. Francis. (The Catholic Post/Tom Dermody)

Among those signing the beam were current and former cancer patients, the Franciscan Sisters, OSF HealthCare mission partners, and many of the construction workers and company representatives involved in the project.

Prayers were led for the continued safety of all workers — as well as for those now confronting cancer — by Deacon Joe Knapp, manager of pastoral care at OSF HealthCare Saint Francis Medical Center, who blessed the beam with holy water.

Gratitude was expressed to the many who have supported the project.

“It’s because of generous hearts of many throughout the community who want to give the gift of many more tomorrows that we’re able to undertake such a massive project,” said Sehring. He explained some of the technological advances the Cancer Institute will offer. For example, it will be just the second site in Illinois offering proton beam therapy, and the first to offer flash therapy. 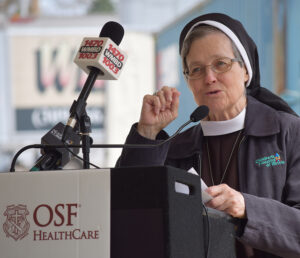 “The Cancer Institute is, and always will be, a reminder of how much God loves and cares for his people,” said Sister Judith Ann Duvall, OSF, chairperson of the boards for OSF HealthCare, during “topping off” ceremonies at the construction site in Peoria on April 28. (The Catholic Post/Tom Dermody)

Bob Anderson, president of OSF HealthCare Saint Francis Medical Center, called the Cancer Institute “a physical manifestation for so many people who are facing the biggest challenges of their lives.”

Ground was broken for the 180,000-square-foot building last summer, and the first treatments are anticipated in early 2024. Construction of the OSF Cancer Institute is being funded in part by a $100 million capital campaign, the largest in OSF history.

“God wanted it to happen,” said Sister Judith Ann. “He enabled it, and it’s his precious gift to all of us.”

Also speaking and lauding the craftsmanship of those building the Cancer Institute and its impact on their families and the local economy were Clint Drury, executive director of the West Central Illinois Building and Construction Trades Council, and Tim Bassett, president of POINTCORE Construction.

EDITOR’S NOTE: Several more photos from the ceremony have been posted to The Catholic Post’s site on Facebook.