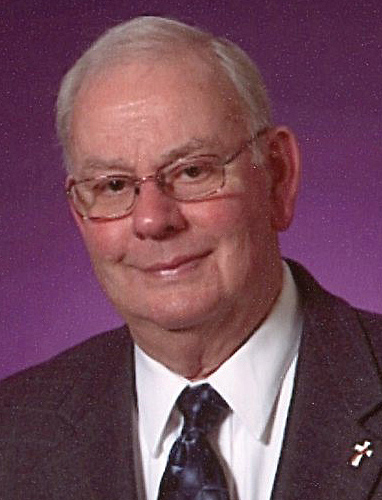 HAMILTON — A funeral Mass will be offered at 10 a.m. on Saturday, April 9, at Sts. Peter and Paul Church in Nauvoo for Deacon William Joseph “Bill” Gray, 83, of Hamilton. Burial will follow in Oakwood Cemetery, Hamilton.

Born Dec. 27, 1938, in Keokuk, Iowa, Deacon Gray was the son of William Bride and Willa Delores (Lower) Gray. They preceded him in death.

He attended Hamilton High School where he lettered in football, track, band and chorus. After he graduated in 1957, Deacon Gray attended the University of Illinois, earning his bachelor of science in agriculture in 1961. While there, he was a member of the Alpha Gamma Rho Fraternity, served on the Interfraternity Council, and completed an internship with the National Livestock and Meats Board.

On June 24, 1961, he married Elaine Steimel at St. Mary Church in DeKalb. They were active as 4-H leaders when their five children were younger.

Part of the Diocese of Peoria’s fifth class of permanent deacons, he was ordained by Bishop John J. Myers on May 9, 1992, at St. Mary’s Cathedral in Peoria. He served Sts. Peter and Paul Parish in Nauvoo until being granted senior status in 2017.

“Our ministry is very much a couple’s ministry,” Deacon Gray told The Catholic Post on the occasion of the 25th anniversary of his ordination in 2017. “The people that we serve see us as one.”

A lifelong farmer, Deacon Gray was diocesan director of rural life from 2004 to 2010.

In addition to liturgical and sacramental ministry, his diaconate service included a weekly presence with students at Sts. Peter and Paul School in Nauvoo; ministry to the sick and homebound; adult education, including Bible studies and spiritual formation groups; high school youth ministry; assistant spiritual director for Cursillo; and several years on the Deacon Council.

He made more than 10 trips to Catholic HEART Workcamps with high school students, and participated in nearly 50 Cursillo weekends.

In addition, his sister, Julie Might of Morrisville, North Carolina, survives.

Memorials may be directed to Sts. Peter and Paul Catholic School in Nauvoo, St. John’s Catholic Chapel at the University of Illinois or the 4-H Club of Hancock County.

EDITOR’S NOTE: A listing of Deacon Gray’s many agricultural and civic memberships can be found in the obituary on the Printy Funeral Home website.