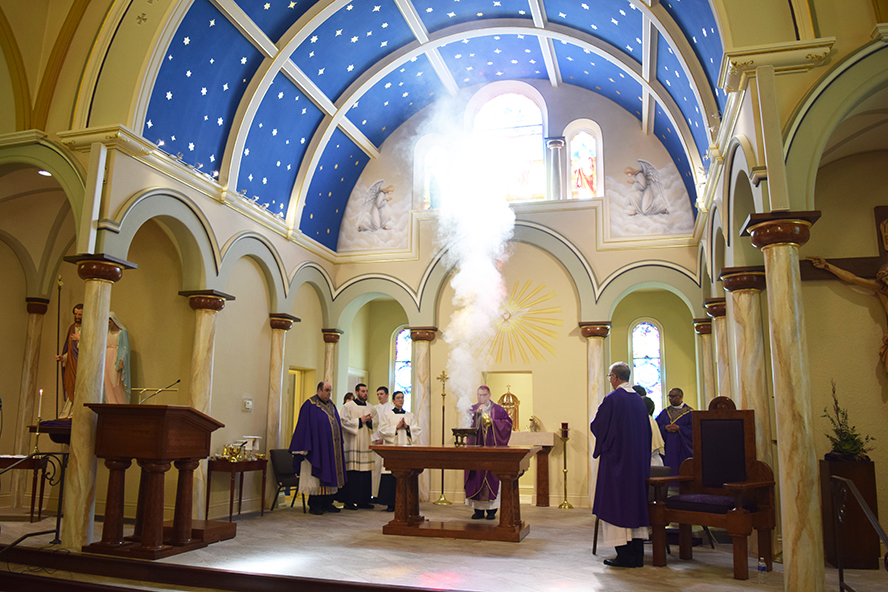 Incense rises as Bishop Louis Tylka leads the rite of consecration for a new altar at Holy Family Church in Lincoln on April 3. A redesign of the sanctuary -- including newly crafted furnishings, paintings, and a restoration of the back wall – is the first phase of a total church renovation. (The Catholic Post/Tom Dermody)

LINCOLN — Calling it a “day of blessing for this community and for the church at large,” Bishop Louis Tylka consecrated a new altar in the renovated sanctuary of Holy Family Church during a Mass on April 3.

“It is a great joy to be with you today to celebrate this Mass and to consecrate this altar that will be used to offer the sacrifice of the Mass and allow us to be nourished and fed by the Lord for years to come,” said Bishop Tylka, who presided during the rite of consecration at Sunday’s liturgy. 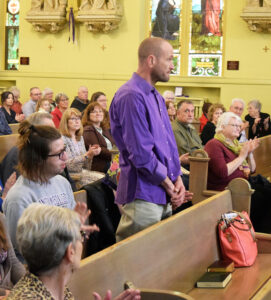 Jason Hoffman, who designed and crafted the new altar, ambo, and presider’s chair, is applauded by the assembly at Holy Family Church in Lincoln at the conclusion of the Mass on April 3 at which the altar was consecrated. (The Catholic Post/Tom Dermody)

Installed the previous evening, the altar is one of three sanctuary furnishings designed and crafted by Jason Hoffman, a local sculptor and furniture craftsman who is also owner and curator of the Lincoln Arts Institute. In addition to the altar, Hoffman created an ambo and presider’s chair — all out of cherry wood.

“Jason built all of this,” said Father Joseph Dondanville, pastor, in remarks at the end of Mass. Asking the artist to stand, he called Hoffman “a gifted carpenter, an artist, and dare I say you are a visionary.” The assembly applauded in agreement.

PHASE I OF RENOVATION

Father Dondanville also thanked members of the parish’s restoration committee as well as donors responsible for the completion of Phase I of the church’s renovation project.

The remodeled sanctuary also includes a new-look back wall that more closely resembles the original design of the brick, Romanesque church built in 1904 and originally under the patronage of St. Patrick. A series of archways and three stained glass windows depicting the Crucifixion — covered by walls erected to create a back hallway decades ago — were rediscovered and lovingly restored. The center Crucifixion window, however, shattered during the removal of a brick wall.

A new main Crucifixion window was created and is dedicated in remembrance of the donor for a heart transplant for Elijah Cox, the son of Jonathan and Dr. Melissa Cox, members of the restoration committee. All of the church’s stained glass windows have been recently restored by Jacksonville Art Glass.

A large crucifix that formerly hung above the tabernacle has a new home beneath an arch on the side of the sanctuary. On the other side are statues of Joseph and Mary.

Fresh paint in the sanctuary — including a ceiling of stars on a dark blue background and the words “It is good for us to be here” spanning the main arch at the sanctuary entrance — was done by Max Autenrieb Church Interior Decorating of Edwardsville. Brenda Weiss of that company added touches that include two angels reverently bowing toward the crucifixion window, and an image of the Holy Spirit. 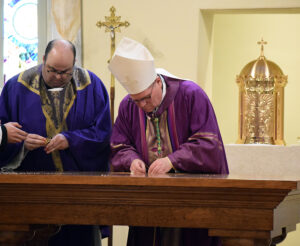 Assisted by Father Joseph Dondanville, pastor, Bishop Tylka places a first class relic of St. Padre Pio in the new altar at Holy Family Church in Lincoln during the rite of consecration on April 3. (The Catholic Post/Tom Dermody)

Father Dondanville told The Catholic Post the next phase of the renovation will include painting of the nave as well as new flooring and pews. Fundraising has already begun.

“It’s been a wonderful adventure and journey to see this happen,” he told the assembly.

In his homily, Bishop Tylka explained how the altar in a Catholic church “is symbolic of Jesus himself.”

“Every time that we’re gathered around this new altar in this church,” said Bishop Tylka, “let us never forget the importance and significance of this table — this table that has been built to stand in the midst of your community (and) consecrated so that it is the very presence and symbol of Christ himself.”

Noting the approach of Holy Week, Bishop Tylka  said the altar symbolizes “Jesus who offers himself for our salvation so that we might know the power of God’s mercy and love in our life.”

The series of consecration rituals included a purifying of the altar with holy water, which was also used to bless the assembly; the chanting of the Litany of the Saints; the insertion and sealing of an altar stone with a first class relic of St. Padre Pio; the spreading of sacred chrism on the altar’s surface; the placing of a bowl of incense on the altar symbolizing prayers rising and that the church “be fragrant with the aroma of Christ;” the lighting of candles; and the covering of the altar with the linen cloth.

Father Dondanville acknowledged that the restoration process began during the pastorate of his predecessor, Msgr. Jeffrey Laible, and said it has led to a “very deep spiritual renewal” for the parish.

EDITOR’S NOTE: More photos from the April 3 Mass at Holy Family Church in Lincoln have been posted to The Catholic Post’s site on Facebook.