All invited to join pope in consecration of Russia, Ukraine to Mary on March 25 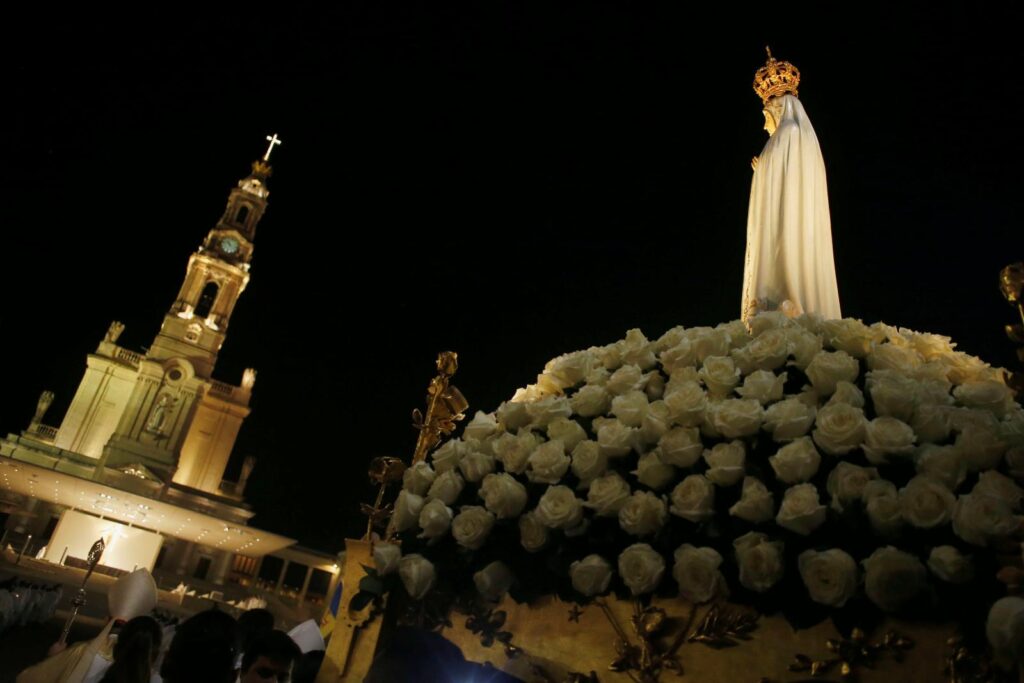 A statue of Mary is seen at the Marian shrine of Fatima in central Portugal. Pope Francis has invited the bishops of the world to join him in consecrating and entrusting all of humanity, and "especially Russia and Ukraine," to Mary on Friday, March 25. (CNS/Reuters)

Catholics around the world and throughout the Diocese of Peoria are invited to join Pope Francis in consecrating themselves, the church, and all humanity, “especially Russia and Ukraine,” to the Immaculate Heart of Mary on Friday, March 25, the Solemnity of the Annunciation of the Lord.

The Act of Consecration prayer may be found and downloaded here in English and here in Spanish. 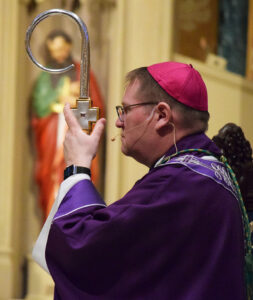 Bishop Louis Tylka will pray the Act of Consecration to the Immaculate Heart of Mary along with students of St. Matthew School in Champaign on Friday morning, March 25. (The Catholic Post/Tom Dermody)

Bishop Louis Tylka has asked priests of the diocese to coordinate prayers at parishes and Catholic schools, if possible, with those of Pope Francis, who will pray the Act of Consecration following a previously scheduled Lenten penance service in St. Peter’s Basilica. The service begins at 11 a.m. CDT (5 p.m. Rome time), and the prayer of consecration will be offered at approximately 12:30 p.m. CDT.

Bishop Tylka will offer the prayer of consecration in Champaign on Friday morning after praying the rosary with students of St. Matthew Catholic School at 10:30 a.m.  In-person attendance is limited to the students; however the service will be streamed live on the parish’s YouTube channel and its Facebook site. Bishop Tylka will then celebrate Mass for the intention of consecrating the world to the Immaculate Heart of Mary at St. John’s Catholic Newman Center on the campus of the University of Illinois at 12:05 p.m.

Meanwhile, the pope’s Lenten penance service and prayer of consecration will be carried live on EWTN and its website at https://www.ewtn.com/tv/watch-live for English or https://www.ewtn.com/es/tv/en-vivo for Spanish. An encore airing will be offered on Saturday, March 26, at 11 a.m. CDT.

At St. Mary’s Cathedral in Peoria, exposition of the Blessed Sacrament is planned following the 7 a.m. Mass on Friday and last until 5 p.m. The rosary will be prayed at 10:30 a.m., and those present will unite themselves with Pope Francis and bishops throughout the world in the act of consecration at 11 a.m.  The rosary and consecration prayer from the cathedral will be livestreamed here.

“For nearly a month, the world has watched in horror the devastating effects of the invasion of Ukraine by Russia,” Bishop Tylka wrote in a March 16 letter to pastors and principals. “This unjust and unnecessary war has shocked and frightened the world, most especially the people of Ukraine. This war must cease!”

He urged parishes and schools “to intentionally unite in a time of prayer imploring God’s mercy through the intercession of the Blessed Virgin Mary to bring about an end to this conflict.”

“May the God of Peace come to our aid,” said Bishop Tylka.

As Russian bombardments continue to decimate Ukraine, Pope Francis prayed that God would free the world from war and the need to self-destruct.

“May the Lord send us his Spirit so that we may understand that war is a defeat for humanity, that those who make war have a need for defeat and may he free us from this need of self-destruction,” the pope said March 23 during his weekly general audience.

Before concluding the audience, the pope led pilgrims in praying a Hail Mary to remember the innocent victims of the war in Ukraine, especially those “who are displaced, who have fled, the people who have died, the wounded and so many soldiers who have fallen, those on both sides.”

ACT OF CONSECRATION AND FATIMA MESSAGE

In the text of the pope’s prayer of consecration sent to chanceries around the globe so that bishops can join the pope March 25, a key passage for many observers reads: “Mother of God and our mother, to your Immaculate Heart we solemnly entrust and consecrate ourselves, the church and all humanity, especially Russia and Ukraine.” 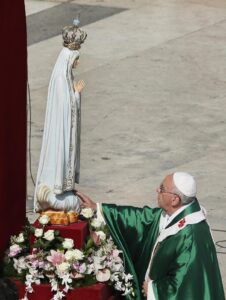 Pope Francis touches the original statue of Our Lady of Fatima after consecrating the world to Mary at the end of a Mass in honor of Mary in St. Peter’s Square at the Vatican in this Oct. 13, 2013, file photo. The pope has invited “every community and every believer” to join him in consecrating and entrusting Russia and Ukraine to Mary on March 25. (CNS/Paul Haring)

Cardinal Konrad Krajewski, the papal almoner, will lead the act of consecration concurrently with Pope Francis while at the Shrine of Our Lady of Fatima in Portugal. When Mary appeared to three shepherd children at Fatima in 1917 with a message encouraging prayer and repentance, she also asked for the consecration of Russia to Mary’s immaculate heart.

While popes, especially St. John Paul II in 1984, made acts of consecration, they did not mention “Russia” out loud, which led some people to think that the Fatima request had not been fulfilled, even though the last surviving visionary, Sister Lucia dos Santos, said St. John Paul had done so.

The papal text pleads with Mary to “accept this act that we carry out with confidence and love. Grant that war may end, and peace spread throughout the world.”

By saying “yes” to God’s plan — an event remembered on the March 25 feast of the Annunciation — Mary “opened the doors of history to the Prince of Peace,” the prayer says. “We trust that, through your heart, peace will dawn once more.”

“To you we consecrate the future of the whole human family, the needs and expectations of every people, the anxieties and hopes of the world,” the prayer says.

Written with the penance service and the Fatima call to repentance in mind, the pope began the prayer with a statement of trust in Mary’s maternal love for all believers.

“You never cease to guide us to Jesus, the prince of peace,” the prayer says. “Yet we have strayed from that path of peace.”

“Amid the thunder of weapons, may your prayer turn our thoughts to peace,” the pope wrote. “May your maternal touch soothe those who suffer and flee from the rain of bombs. May your motherly embrace comfort those forced to leave their homes and their native land. May your Sorrowful Heart move us to compassion and inspire us to open our doors and to care for our brothers and sisters who are injured and cast aside.”

Portions of this story were supplied by Catholic News Service.