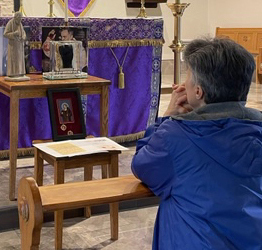 Among the many venerating the relic at St. Ambrose Church in Milan on March 14 was Sheila Herman, pastoral assistant at the parish. (Provided photo/Laura Boemecke)

MILAN — To the hundreds who came to venerate a relic of St. Padre Pio at St. Ambrose Church here on March 14 and again six days later in Peoria, Father Bill Kneemiller offers a suggestion. 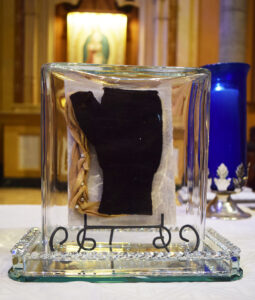 A mitten worn by St. Padre Pio to shield the wounds of Christ he bore is encased in glass for veneration March 20 at St. Mary’s Cathedral in Peoria. (The Catholic Post/Tom Dermody)

“This is a wonderful time to start a Padre Pio prayer group,” said Father Kneemiller, a senior priest of the Diocese of Davenport who was homilist during a Mass on the evening of the relic’s visit to St. Ambrose.  The church in Milan was filled with the faithful who came to see the relic — a glove worn by St. Padre Pio, a Capuchin priest of the 20th century who bore the stigmata, or five wounds of Jesus, for 50 years. On March 20, the relic encased in glass drew long lines to St. Mary’s Cathedral in Peoria for three hours of veneration.

John Theissen, caretaker of the relic, said people’s love for St. Padre Pio and his reputation as a powerful intercessor, including for healing, is what brings crowds out wherever the relic travels.

“This is a representation of Padre Pio,” said Theissen of the glove, received by a family in northern Kentucky in 1920 after they had written to Padre Pio at his southern Italian monastery. “This is like him being in the room for them. It makes people feel close to him.”

EASY TO START A PRAYER GROUP

In Milan, Father Kneemiller shared an idea for how to continue that closeness with the modern-day saint. St. Padre Pio, renowned for his holiness and care for the weak and sick, died in 1968 and was canonized by St. John Paul II in 2002. He is now also known as St. Pio of Pietrelcina.

“Get a biography of Padre Pio,” recommended Father Kneemiller, noting that the publisher TAN Books offers several. “Then, get together family or friends once a month” to read and reflect on a chapter, perhaps on First Saturday mornings. Father Kneemiller said such small groups may want to begin with morning Mass and a breakfast.

“It’s so simple,” said Father Kneemiller. “It’s not like a big Bible study. All you need is a simple book and a desire to get together” and have “Padre Pio bless your family and friends.”

The priest said the evening in Milan — which included a Holy Hour of eucharistic adoration — was “as good as it gets,” noting the sense of both prayerfulness and joy. Father Joseph Baker, pastor of St. Ambrose Parish, was principal celebrant of the Mass, and many attending also received the sacrament of reconciliation.

Meanwhile, as lines began to form at St. Mary’s Cathedral a half-hour before the scheduled 2:30 p.m. opening of veneration on Sunday, caretaker Theissen explained that ownership of the glove relic — which has documentation — came into his wife’s family in the 1950s.

Theissen, a member of Blessed Sacrament Parish in Fort Mitchell, Kentucky, and a recent retiree, said that six months ago he asked permission of the current owner to take the relic to churches and private homes for prayer.

“It’s just exploded,” said Theissen of the interest in the relic, listing the several states to which he has already brought it. He considers this new work a ministry and accepts no donations. 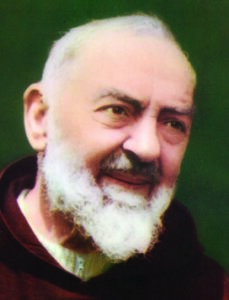 Born Francesco Forgione on May 25, 1887, to a poor family near Italy’s Adriatic coast, St. Padre Pio entered the local Capuchin novitiate at the age of 15. He was ordained a priest in 1910 and almost immediately began informing his superiors that he was experiencing spiritual and physical signs, along with a number of health problems.

Beginning in 1918, at the age of 30, the priest reported bleeding from his hands, feet and side — the stigmata wounds of Christ’s crucifixion.

Biographers report that St. Padre Pio was uneasy about such phenomena, declaring “I only want to be a friar who prays.” St. Padre Pio’s alleged signs and special powers — reportedly including prophecy, bilocation, and intercessory healings — soon attracted massive crowds to his southern Italian monastery, where he ministered to long lines of penitents.

With donations, St. Padre Pio opened a small hospital next to the monastery in 1925, the forerunner to a much larger health complex he had built in the 1950s.

EDITOR’S NOTE: Those wishing to begin a St. Padre Pio prayer group may contact Father Bill Kneemiller at kneemillerw@diodav.org . Parishes or schools wishing to host the glove relic may contact John Theissen at (859) 740-9235 or aureliajohn@fuse.net.