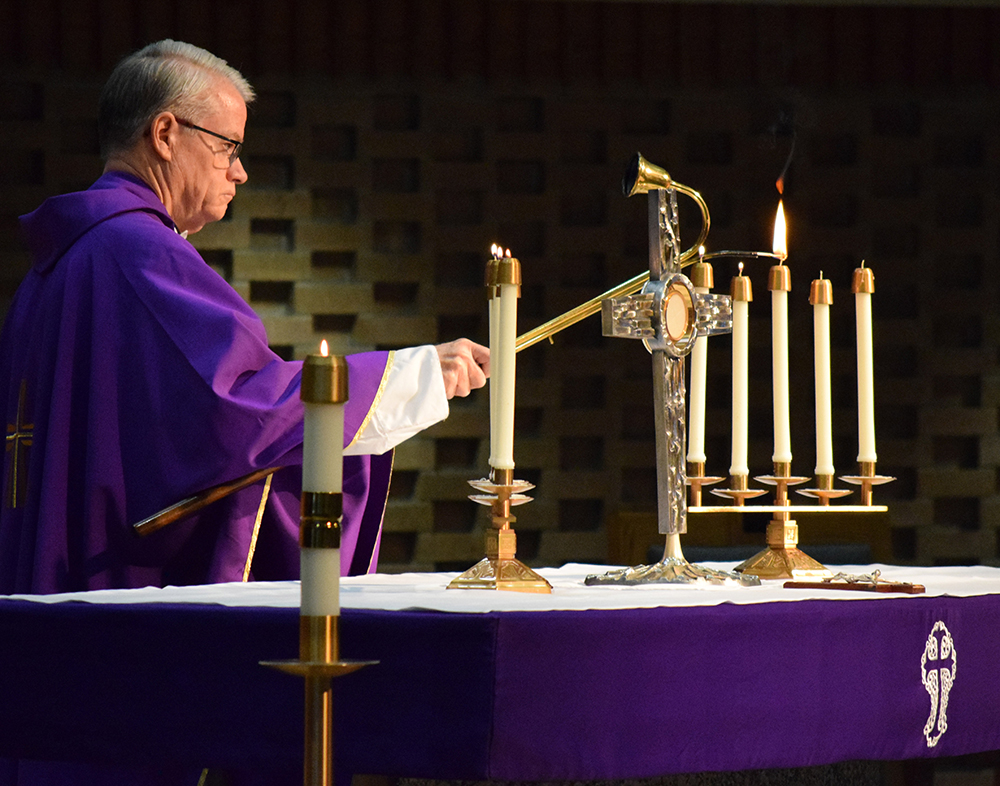 Msgr. Gerald Ward, pastor of Blessed Sacrament Parish in Morton, lights candles around the exposed Blessed Sacrament at the start of a Day of Prayer for World Peace and the People of Ukraine" hosted by the parish on Wednesday, March 16. (The Catholic Post/Tom Dermody)

MORTON — Blessed Sacrament Parish here was among six area faith communities hosting days of prayer for world peace and for the people of Ukraine during the week of March 14-18.

Msgr. Gerald Ward, pastor, presided at an 8 a.m. Mass on Wednesday, March 16, that was followed by seven hours of prayer before the exposed Blessed Sacrament. The Mass began as Ukrainian President Volodymyr Zelensky was addressing the U.S. Congress virtually from Kyiv and appealing for help for his war-weary country. 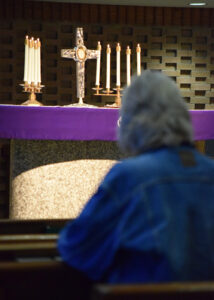 Teresa Williams was among those taking part in a Day of Prayer for Peace and the People of Ukraine hosted by Blessed Sacrament Parish in Morton on Wednesday, March 16. (The Catholic Post/Tom Dermody)

“We humble ourselves before the Lord this day, asking God to truly intervene in our world,” Msgr. Ward said in his homily, “especially with those who are making decisions, and to protect the people who are suffering so greatly in Ukraine – the refugees, and those who are dying at the hands of those who are attacking them.”

He called on area faithful to “see ourselves today as servants of the Lord, servants who are calling upon the Lord to bring peace to our world.”

After exposing the Blessed Sacrament following Mass, Msgr. Ward knelt and prayed for peace “and that those who are working for peace will never tire in their efforts.”

“Dear God,” he continued, “help us to overcome this conflict by your loving presence and by your grace. Hear our prayers that we make today in your presence.”

Joining the prayers of the dozens of adults present after the Mass were those of third grade students from Blessed Sacrament School, who came to the church that morning for the sacrament of reconciliation.

Those unable to attend were asked to pray for peace at a time of their choosing.

EDITOR’S NOTE: More photos from the Day of Prayer have been posted to The Catholic Post’s site on Facebook.