Paul Moore: Immigrant leaves St. Louis’ ‘The Hill’ for the Gateway of Heaven 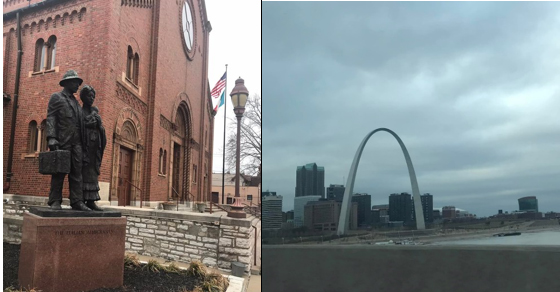 A statue memorializing Italian immigrants outside St. Ambrose Church, and the Gateway Arch, both in St. Louis. (Provided photos)

In My Father’s House / By Paul Moore

My wife Mary Louise and I went down to St. Louis in late February for a funeral. It was for my brother-in-law Jerry’s father-in-law, Leo. Leo was 96, an immigrant from Italy 68 years ago.

Although I didn’t know him personally, I felt like I knew Leo through Jerry and his wife Linda, Leo’s daughter. Through loving eulogies from Jerry and Leo’s granddaughter, Gia, I discovered more. I learned that Leo could often be heard to say, “In America, anything is possible.”

There was good reason for his confident optimism. Within a year of his arrival in 1954 with two words of English — United States — Leo had found a wife, Sue, and together they started to build a life.

As the Song of Farewell was intoned at his funeral Mass in St. Ambrose Church, Leo was going on ahead unaccompanied.

After a short interval of working for the “Padrone,” or boss, Leo struck out on his own with a construction and renovation business. He made friends wherever he went — and he and Sue went everywhere.

Yet on this, his funeral day, as the Song of Farewell was intoned in St. Ambrose Church, Leo was going on ahead unaccompanied. As our Lord said to Peter, “Where I am going, you cannot follow.” (John 13:36)

WITH THE ITALIANS AT “THE HILL”

At this point, having plagiarized from Jerry and Gia’s eulogies, I’ll “borrow” an insight from Mary Louise. She’s the editor and proofreader of my columns, and in this instance my co-author as well.  She posted a Facebook tribute and a couple of photos honoring Leo “and all the other Italians [and by extension all immigrants] who came to the Gateway City and climbed ‘The Hill,’” referring to the famous Italian neighborhood in St. Louis.

In the 1800s, many brave souls (including Lewis and Clark), started their journey westward from St. Louis, so much so that St. Louis became known as the Gateway City. Once Mary Louise had reminded me of that gateway connection, it was easy to see how the concept might have been meaningful to Leo. In one sense he had “arrived,” yet at a city made famous as a place of departure.

Had he harbored the private spiritual sense that St. Louis was a wonderful interlude, but his journey was not quite complete? As family and friends said their final goodbyes in St. Ambrose, no doubt Leo would have been greatly touched, but it’s not hard to imagine him being drawn toward the beckoning Light of his final destination.

He would know the Lord had prepared a dwelling place for him, and he wouldn’t have to worry about the quality of the renovations. St. Joseph the carpenter is the patron saint of Italy (feast day March 19), and Leo could be confident that Jesus learned how to build well at his stepfather’s hands.

Still, there might be a little understandable nervousness as Leo approached the Gateway of Heaven. The experience of the new is always a little nerve-racking. It’s like the first day in school, or being the new kid on the block coming outside to join the other kids for the first time. Most obviously, of course, Leo would be an immigrant again.

But this time, any concerns about being a stranger in a strange land would be short-lived. Leo would be coming home in the truest sense possible. One can picture him greeting family and old friends, and by all I’d heard of him, he would be making lots of new friends in the highest of high places.

I am an immigrant, too, and while I never had the privilege of meeting Leo personally, his life provides some lessons that I feel personally, as if he had been given permission to send messages to a fellow traveler across the Great Divide. Grow where you are planted. Don’t worry too much about wherever you find yourself, the Lord will find you, as the Lord had “met” him in St. Louis.

Finally, Leo might have left one “Hill” behind, but he had emigrated toward even more wonderful elevations: “I will lift up mine eyes unto the hills, from whence cometh my help.” (Psalm 121)