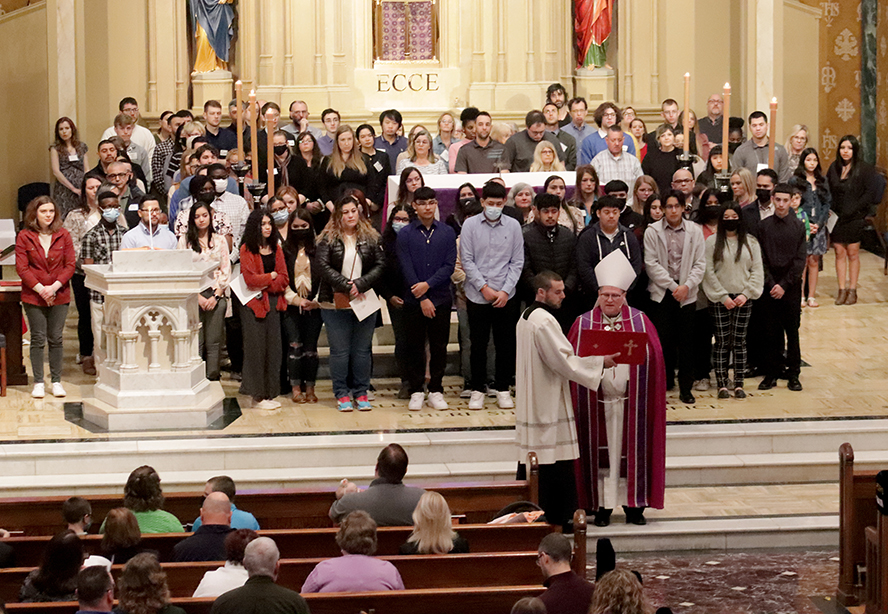 As the candidates who are preparing to be confirmed and receive the Eucharist at the Easter Vigil listen on March 5, Bishop Tylka asks their sponsors to affirm their readiness "to participate fully in the sacramental life of the Catholic Church" and the assembly if they will support them in "faith, prayer and example." (The Catholic Post/Jennifer Willems)

Nearly 300 people came to St. Mary’s Cathedral in Peoria last weekend to declare their intention to enter fully into the life of the Catholic Church through the Easter sacraments of baptism, confirmation and Eucharist, a step that created so much joy that the only response was applause and praise of God.

That applause filled the cathedral twice for the Rite of Election and the Call to Continuing Conversion, which was held on Saturday morning, March 5, and Sunday afternoon, March 6. Bishop Louis Tylka presided at both, welcoming the men, women and children who are preparing to be received into the church and assuring them that “the Lord is very near to us.” 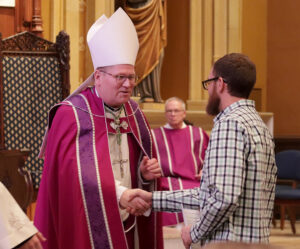 Bishop Tylka greets Jeff Reynolds of Kewanee, who is preparing for the Easter sacraments of baptism, confirmation and the Eucharist, at the Rite of Election and the Call to Continuing Conversion on March 6. (The Catholic Post/Jennifer Willems)

“The Lord has always been with you. You’ve always been chosen by God,” he said in his reflection on the reading from St. Paul’s Letter to the Romans that was proclaimed as the liturgies began. “It’s the awareness that, for whatever reason at this time in your life, you became more aware, more present to the fact that God walks with you.”

Standing at the center of the cathedral sanctuary, he explained that the Rite of Election and the Call to Continuing Conversion provide an opportunity for them to come together and hear publicly that the people of God are praying for and with them.

When we see that, when we recognize it, and feel the love and mercy God offers, he will open a new path to follow — the path of discipleship, Bishop Tylka promised them.

The catechumens — those who will be baptized and confirmed at the Easter Vigil and then come to the Lord’s table for the first time — were called from their pews by name and invited forward to be greeted by Bishop Tylka. In a change from previous years, they were then ushered into the sanctuary and faced the assembly.

After he had heard their godparents affirm that the catechumens had “faithfully listened to God’s word proclaimed by the Church,” responded to that word, and joined their Christian brothers and sisters in prayer, he asked the assembly if they would offer “your prayer and affection as we move toward Easter?”

Finally, he turned to the catechumens and asked if it was their wish to enter fully into the life of the church through the Easter sacraments.

Hearing them say, “We do,” Bishop Tylka took his crosier in hand and declared them to be “members of the elect, to be initiated into the sacred mysteries at the next Easter Vigil.” 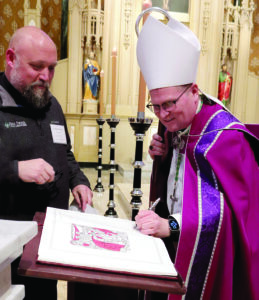 Bishop Tylka signs the Book of the Elect for St. Patrick Church of Merna in Bloomington as Father Dustin Schultz, pastor, looks on at the Rite of Election and the Call to Continuing Conversion on March 5. (The Catholic Post/Jennifer Willems)

He led a sustained round of applause for them.

The candidates — those who are already baptized and will make a profession of faith and enter into full communion with the Catholic Church through the sacraments of confirmation and Eucharist — are called to continuing conversion.

They were also called forth, greeted by Bishop Tylka and then invited in the cathedral sanctuary. Gaining the affirmation of their sponsors and the assembly, he turned to them and said, “The church recognizes your desire to be sealed with the gift of the Holy Spirit and to have a place at Christ’s Eucharistic table.”

He encouraged them to “hear the Lord’s call to conversion and be faithful to your baptismal covenant.”

Another round of applause followed, led by the bishop.

The celebration continued with Bishop Tylka signing each parish’s Book of the Elect and then posing for photos with each group.

The Easter Vigil will be celebrated on Holy Saturday, April 16.

EDITOR’S NOTE: More photos from the Rite of Election and the Call to Continuing Conversion have been posted to The Catholic Post’s site on Facebook.