Glove relic of St. Padre Pio will be displayed for veneration in Milan, Peoria 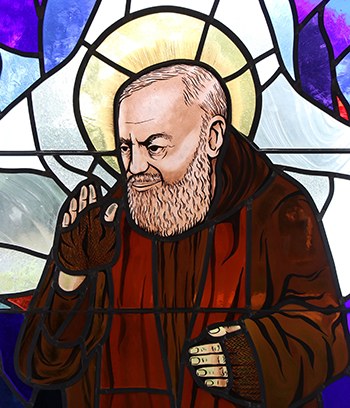 St. Padre Pio is depicted in a stained-glass window. (CNS/Gregory A. Shemitz)

At least two sites in the Diocese of Peoria this month will host a glove relic of St. Padre Pio, a Capuchin priest who bore the stigmata of Jesus, for veneration.

Born Francesco Forgione in Italy in 1887, Padre Pio — now also known as St. Pio of Pietrelcina — entered the local Capuchin novitiate at age 15. Beginning in 1918, at the age of 30, the priest reported bleeding from his hands, feet and side — the stigmata wounds of Christ’s crucifixion. The wounds were said to have lasted 50 years, until his death.

St. Padre Pio’s alleged signs and special powers soon helped attract massive crowds to his southern Italian monastery. With donations, he opened a hospital next to the monastery. After years of ministering to long lines of penitents and after suffering several bouts with illness, St. Padre Pio died in 1968. He was canonized by St. John Paul II in 2002.