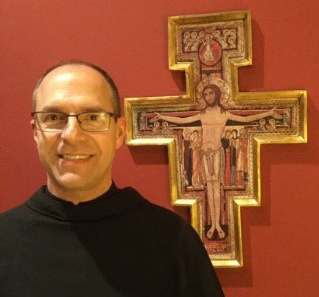 Father Paul Joseph Langevin, OFM Conv., has been elected minister provincial of the St. Bonaventure Province of the Conventual Franciscans. He has been pastor of Holy Family Parish in Peoria since 2018. (Provided photo)

With his election on Jan. 31, Father Paul Joseph becomes the 14th leader of the St. Bonaventure Province.

“I am truly humbled by my brother’s confidence in me to lead our province in our fraternal life as we give prophetic witness to the Gospel of Jesus Christ by living the ideals of St. Francis of Assisi in the Conventual tradition,” Father Paul Joseph said. “And while I am still a bit overwhelmed and trying to wrap my mind around all of this, I know the Holy Spirit will guide me through His plan in God’s time.”

Father Paul Joseph hopes to be able to continue in the pastoral care of Holy Family Parish and School until the end of June.

“I ask for prayers not only for me and for the Province of St. Bonaventure during this time of transition, but also for the wonderful family of faith at Holy Family, who have been so instrumental and supportive of me in discovering the joys and the beauty and the grace of being a parish priest,” he said.

Born in Toledo, Ohio, he holds a bachelor’s degree from Bowling Green State University in Ohio and a master of social work from the University of Michigan. Before entering the Conventual Franciscan Order in 2008, he was a clinical social worker for almost 20 years.

Following ordination, he served as parochial vicar at Holy Family Parish in Peoria, and then at the Basilica of St. Josaphat in Milwaukee, Wisconsin. He returned to Holy Family as pastor and guardian of the parish and friary in 2018.

Father Paul Joseph will be recognized as the Distinguished Pastor of the Year by the Office of Catholic Schools of the Diocese of Peoria in May.

He was elected to the definitory of his Franciscan community in 2018, and has been chair of the province’s Safe Environment Commission since 2014.