Prayers for peace in Ukraine are lifted at St. Matthew, Champaign, candlelit rosary 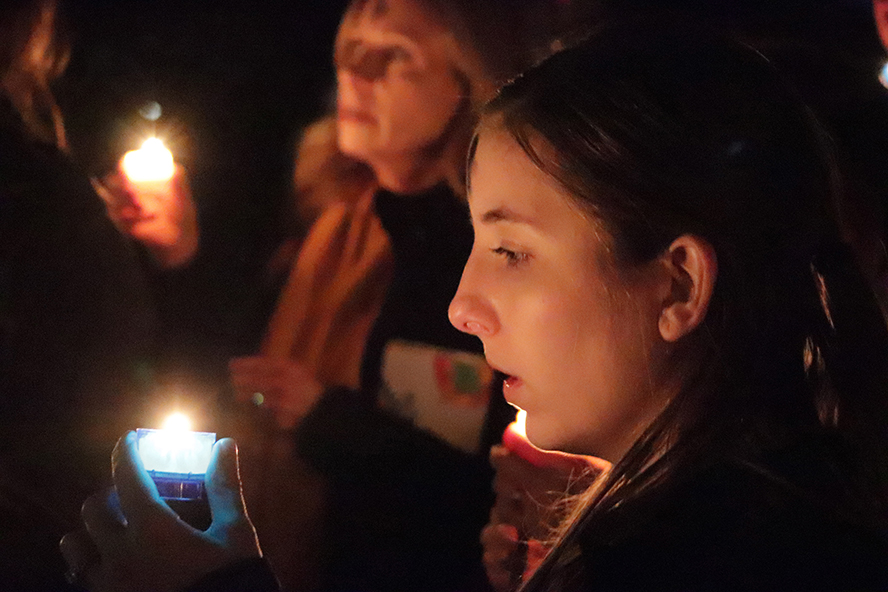 Pope Francis called on Catholics around the world to fast and pray for peace in Ukraine on Ash Wednesday and St. Matthew Parish in Champaign obliged by holding a Candlelit Rosary for Ukraine at the Mary Grotto. Those who attended were given blue and gold candles -- the colors of the Ukrainian flag. (The Catholic Post/Jennifer Willems)

CHAMPAIGN — Gathered around the Blessed Mother in the grotto at St. Matthew Church, members of the parish raised their hearts and prayers, as well as blue and gold votive candles, as they pleaded for peace in Ukraine. 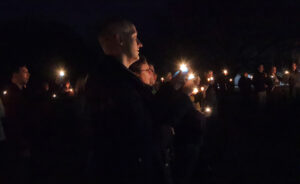 Robert Taylor of St. Matthew Parish in Champaign is surrounded by people lifting their blue and gold votive candles in prayer as part of the Candlelit Rosary for Ukraine on Ash Wednesday. It was held in front of the Mary Grotto at the Champaign church and intended to unite their prayers with Catholics around the world. (The Catholic Post/Jennifer Willems)

The candlelit rosary took place on Ash Wednesday, the day Pope Francis had asked Catholics around the world to fast and pray for their brothers and sisters in the Eastern European nation. Ukraine has been under siege since Russian forces invaded last month and the violence continues to escalate.

“We must escalate our prayers, to beg the Lord for peace in Ukraine, for peace in the world,” Msgr. Stanley Deptula, pastor of St. Matthew Parish, said as he started the evening Mass on March 2.

With just over a day to plan, the parish staff cast as wide a net as possible to school families and local pastors. Msgr. Deptula said they also used social media to spread the word and promoted the candlelit rosary at all the Ash Wednesday Masses.

They couldn’t delay, he said.

“I’ve been really moved, the past couple days, by seeing photographs of priests offering Mass in bomb shelters and in front of tanks, surrounded by children, and just the amount of suffering that the people of Ukraine are going through,” Msgr. Deptula told The Catholic Post. “It’s touched me very personally. So I really wanted to do this rosary.”

They talked about waiting for the weekend, so they would have more time to plan, but Pope Francis 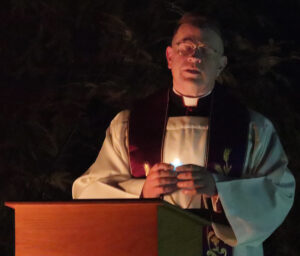 Msgr. Stanley Deptula, pastor of St. Matthew Church in Champaign, closes his eyes as he prays for peace during the Candlelit Rosary for Ukraine on Ash Wednesday. (The Catholic Post/Jennifer Willems)

helped them decide to act sooner rather than later.

“So in some ways it’s spontaneous, but a great connection with prayers around the world for this tremendous need,” he explained.

During a Holy Hour for men on Monday night in preparation for Lent, Msgr. Deptula reminded them that there were men in Ukraine fighting to defend their country and their families at that very moment.

“We can feel like there’s nothing we can do for them, but we can pray, we can pray. We know that prayer is powerful,” he told them.

Helping the parish staff with a key element was Lagron-Miller Company in Peoria, which shipped overnight the blue and gold candles — the colors of the Ukrainian flag.

While the Glorious Mysteries of the rosary are traditionally prayed on Wednesdays, the Sorrowful 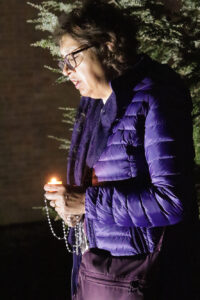 Bathed in the light coming from the statue of the Blessed Mother, Olivia Parker closes her eyes in prayer as the Candlelit Rosary for Ukraine starts on Ash Wednesday at St. Matthew Church, Champaign. “May these little lights remind us that one light pierces all darkness, said Msgr. Stanley Deptula, pastor. (The Catholic Post/Jennifer Willems)

Mysteries were chosen “in this time of war.”

Msgr. Deptula offered a brief reflection before the prayer started and closed with a series of prayers by Pope St. John Paul II. In between, parishioners led the five decades of the rosary: Britta Kreps, The Agony of Jesus in the Garden of Gethsemane; Nick Kiesel, The Scourging of Jesus at the Pillar; Christie Rogers, The Crowning of Jesus with Thorns; Chase Stevens, assistant director of evangelization at St. Matthew, The Carrying of the Cross; and Sister M. Isabella Erb, FSGM, second grade teacher at St. Matthew School, The Crucifixion and Death of Jesus.

Between each decade, those who attended raised their candles and sang an “Ave Maria” refrain. At the end of the rosary, Msgr. Deptula encouraged them to take the candles home and continue to use them during times of prayer.

“Let us pray that before these little candles burn out, there is peace in Ukraine, there is justice for the Ukrainian people, that they can live a life of freedom in their own country — free from fear and tyranny,” he said.

EDITOR’S NOTE: More photos from the candlelit rosary have been posted to The Catholic Post’s site on Facebook.