Make it 3: Bement woman among 276 expected for Rite of Election March 5-6 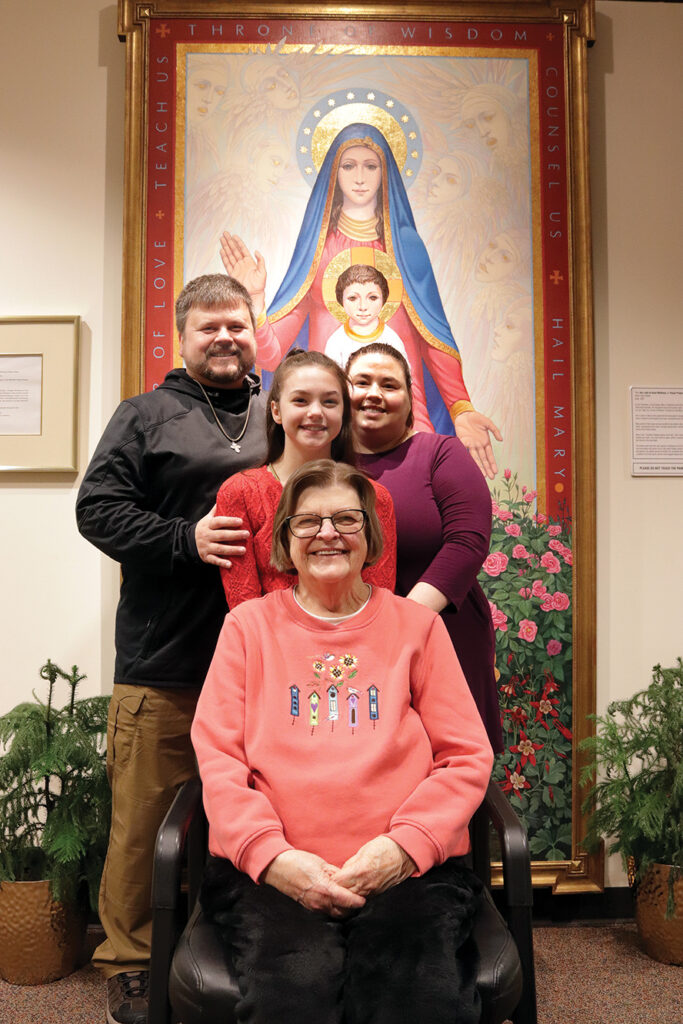 David Lansford, daughter Jerrica, and wife Jill surround his mother, Gretchen, who will be received into the Catholic Church at the Easter Vigil on April 16 at St. Matthew Church, Champaign. They are standing in front of Our Lady of St. Matthew in the parish center. (The Catholic Post/Jennifer Willems)

CHAMPAIGN — Jill Lansford of Bement didn’t know what she was looking for, but she knew she wasn’t finding it in the other faith traditions she was exploring with her husband, David, and daughter, Jerrica.

It wasn’t until she heard another person’s story of faith after they entered the Catholic Church and started to delve into Catholicism herself that she found what her heart desired. Her faith, nurtured at St. Matthew Parish here, brought her to the Easter Vigil in 2019, with David following the next year.

Now it’s time for her mother-in-law, Gretchen Lansford, to complete her Christian initiation by making a profession of faith, being confirmed, and receiving the Eucharist for the first time on April 16.

Gretchen is one of 276 people who will come to St. Mary’s Cathedral in Peoria next weekend to begin their final preparation for the Easter sacraments at the Rite of Election. She will be accompanied by her family on Saturday, March 5, for the 10:30 a.m. ceremony.

Due to the number of men, women and children being received into the church at the Easter Vigil, a second prayer service will be held on Sunday, March 6, at 3:30 p.m.

Bishop Louis Tylka will preside at both.

According to Phillip Lee, director of the Office of Divine Worship, all are welcome to attend and support these brothers and sisters in faith. The Rites of Election will also be livestreamed from the Diocese of Peoria’s YouTube page, which can be found at cdop.org.

As The Catholic Post was going to press, 36 parishes had indicated that they were bringing 65 catechumens — those who will be baptized, confirmed and receive the Eucharist. They will become “members of the elect.”

Another 211 people will attend as candidates and be called to continuing conversion. Like Gretchen Lansford, they have already been baptized and will be completing their Christian initiation at the Easter Vigil.

“I FELT THE PULL”

Between them, Jill and David Lansford had explored the Masonic Order, the Presbyterian Church, First Christian Church, Methodist Church and the Baptist Church. “There were a lot of unanswered questions,” said Jill, a dental hygienist in Savoy.

She couldn’t refute the truth of Catholicism, however.

“The more you learn about Jesus and the truth, the more you can’t stop talking about it.” — Jill Lansford

“The more you learn about Jesus and the truth, the more you can’t stop talking about it,” she told The Catholic Post. One of the people she talked to was David, who has worked in law enforcement for 31 years and currently serves as a deputy in the Piatt County Sheriff’s Department.

Jill was spending a lot of time at Mass and in the adoration chapel at St. Matthew, even though she hadn’t yet wrapped her mind around the fact that Jesus was truly present in the Eucharist.

“I didn’t quite understand what was calling me, but I felt the pull,” she said.

When he realized that Jill had found a church home, David decided he needed to see what was going on.

“I wanted our family to go to the same church,” he explained. “So I started coming and then I felt a pull also.”

In time, Gretchen joined them — “not to learn the religion or to become a Catholic, but just because I wanted to become a united family that believed in Jesus. I started coming and it just kind of progressed from there.”

Gretchen is not immune to the sense of peace and calm to be found in the adoration chapel either, saying she loves it.

She started RCIA last fall and Jerrica joined her to learn more about the Catholic faith. “We’ve taken over a table,” Jill said with a smile.

“I wanted to become a united family that believed in Jesus. I started coming and it just kind of progressed from there.”  — Gretchen Lansford

Jerrica, who is enrolled in online schooling through Liberty University and is in the seventh grade program, is in her first year of preparation for confirmation.

David has found another kind of pull at St. Matthew.

“Every time I come here I feel the Holy Spirit and I’m energized for the whole week. The love of everybody that is part of this church — I can feel all of that,” he said.

His mother is looking forward to being part of that faith community and one thing more: “Being closer to my family.”