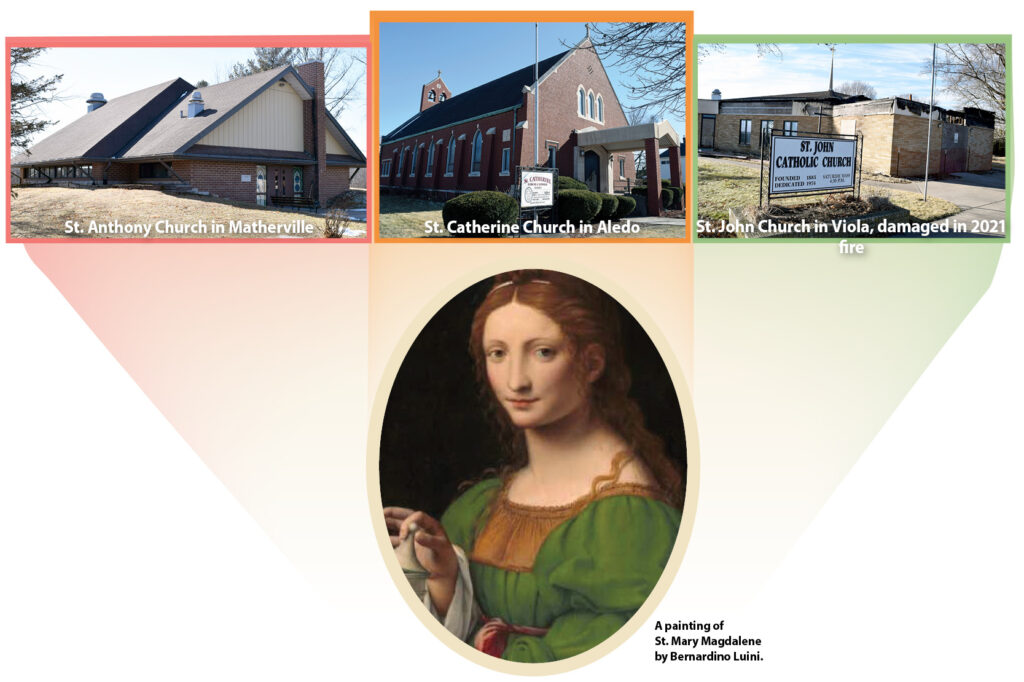 The churches of the merged parishes are pictured above with an image of the new parish's patron, St. Mary Magdalene. The churches include, from left, St. Anthony in Matherville, St. Catherine in Aledo, and St. John in Viola, which was damaged beyond repair by an arson fire last May.

ALEDO — The three Catholic parishes of Mercer County have merged to form a new parish under the patronage of St. Mary Magdalene.

The parishes that have merged include St. Catherine in Aledo, St. Anthony in Matherville, and St. John in Viola. The Viola faith community has been without a church for nine months following an arson fire last May that left the structure beyond repair.

About 40 members of the merged parishes met on Feb. 20 at the St. Catherine parish hall to ask questions and discuss ramifications with Father John Thieryoung, who has served as pastor of all three faith communities for nearly two decades and will continue as pastor of St. Mary Magdalene.

Father Thieryoung explained that while the merger will simplify administrative tasks such as bookkeeping and help reduce expenses, more importantly it provides “an opportunity to renew and reflect on our focus of how to best serve Christ and others” in that region of the Galesburg Vicariate. 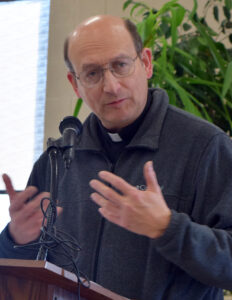 Father John Thieryoung, who has served all three former Mercer County parishes as pastor for 20 years and will continue as pastor of the new St. Mary Magdalene Parish, discusses the merger during a gathering Sunday at the St. Catherine parish hall in Aledo. (The Catholic Post/Tom Dermody)

He said the name “St. Mary Magdalene” was chosen because of the Catholic history of Mercer County, which at one time had six Catholic churches.

The county’s pioneer church was St. Mary in the Mississippi River community of Keithsburg. Father Thieryoung said a focal point in that church, built in 1868 and closed in 2013, was a Crucifixion image painted above the high altar that showed Mary Magdalene embracing the cross.

“The reason we’re here,” he told those gathered on Sunday afternoon, “is the same reason that first parish was founded in Keithsburg and Mercer County to begin with: How do we bring Christ and the gift of his divine life, the gift of his grace, to all people, particularly serving our Catholic population here in the county?”

While the merged parish will have a new name, the churches in Aledo and Matherville will retain their patronage. The decree states that St. Catherine in Aledo will be “the principal church and seat of parish governance” with St. Anthony in Matherville constituted as a subsidiary church.

“I love the name St. Mary Magdalene,” said Jackie McKnight, a member of St. Catherine Parish who took part in Sunday’s meeting. “It’s a part of the history of our county I was unfamiliar with. It’s a great name and a great saint.”

The official decree of merger — also signed by Msgr. Philip Halfacre, vicar general — followed consultation with the diocese’s Presbyteral Council and the recommendation of Father Thieryoung. It cited the long collaboration between the parishes under a shared pastor, the warm welcome that Viola parishioners have received in the other two churches since the fire, and a downward trend in both overall and Catholic population in the county.

At Sunday’s meeting there was discussion about the establishment of a parish council, physical improvements needed at the two church sites, Mass schedules, and ways to communicate with and unite parishioners including a parish app, website, a new directory, and a prayer chain. 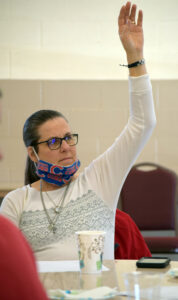 Jackie McKnight raises her hand to ask a question during a meeting Feb. 20 at St. Catherine parish hall in Aledo to discuss the merger of the parishes in Mercer County. She has been an active member of St. Catherine Parish. (The Catholic Post/Tom Dermody)

Common social functions were also discussed, a topic close to the heart of JoAnn Heil, who lives just a block from the former St. John Church in Viola.

“We need both — we need the worship and we need the social,” Heil told The Catholic Post. “And I really miss the social” at St. John, she said, noting the monthly first-Saturday suppers the Viola church would host.

Father Thieryoung said that he re-plated a ciborium that survived the fire at St. John and is using that at Masses in Matherville. A large crucifix from the Viola church may also be restored for use by the new parish.

The three Catholic cemeteries in Mercer County — St. Mary in Keithsburg, St. John in Viola, and St. Joseph between Aledo and Matherville — are not impacted by the merger, said Father Thieryoung. All other parish accounts will be combined as one.

St. Catherine Parish in Aledo was founded in 1914. The present church was built in 1930 under the direction of Father J.T. Shields. The parish was served by Father C. M. Meyer for 35 years (1945-1980). St. Catherine was the diocesan base for a religious education effort in the mid-20th century known as the Aledo-Peoria Plan that had a wide impact. Parish property also includes a rectory and a parish center built in 1968.