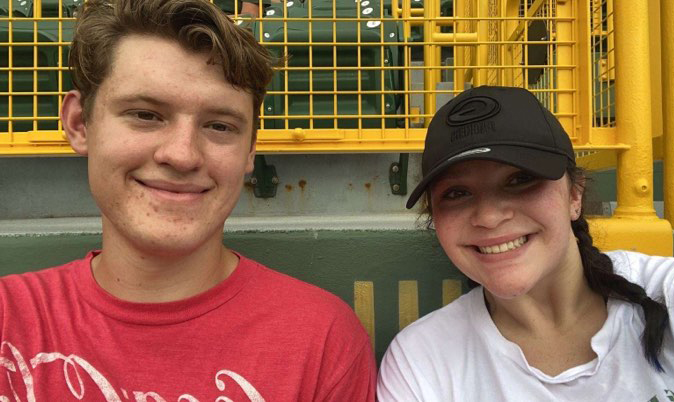 Sam Matthews is only allowed one visitor at a time at the burn center at Eskenazi Health in Indianapolis and Alyssa Alwardt makes the trip from Hoopeston faithfully. She and Kari Matthews, Sam’s mother, have been supporting one another. (Provided photo/Kari Matthews)

DANVILLE — He is only allowed one person in his room during visiting hours in the burn center at Eskenazi Health in Indianapolis, but Sam Matthews is never alone.

He has been surrounded by prayers from people all over Vermilion County — and beyond — since the devastating fire on Feb. 5 that left him with third degree burns over 80 percent of his body. In addition to the Holy Hours, rosaries and novenas, those who are following Sam’s progress have been fasting on Fridays. 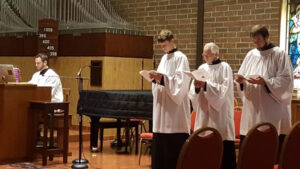 Sam Matthews (to the right of the organ) was an altar server at Holy Family Church in Danville for six years and went on to set up livestreaming for Masses when COVID-19 hit. At 6 foot 5 inches he is “a gentle giant,” said Father Steven Loftus, pastor. (Provided photo/Kari Matthews)

“We truly believe that God’s got a miracle for him. I really believe it,” said Joanne Bibb, director of religious education at Holy Family Parish in Danville.

Sam, 21, was in Hoopeston visiting his girlfriend, Alyssa Alwardt, when her family’s garage and home caught fire. His mother, Kari Matthews, said on Facebook that she will not talk about the fire other than to say that “a wonderful family lost their home and my kid just happened to be there.”

What she has said, over and over again in updates, is that prayer has power and they can feel it as Sam continues to fight infections, undergo surgeries, and receive the treatments that go along with serious burns. He is expected to be hospitalized for several months.

One of Kari’s friends, Terra Patient, has set up a GoFundMe account with the goal of raising $100,000.

The St. Vincent de Paul Society at Holy Family Parish is also accepting donations for the Matthews family. Conference president Russ Smith said whatever is received is transferred electronically into the family’s account so they’ve always got money they can use.

Those who would like to help this way may send checks made out to “St. Vincent de Paul Society” to Holy Family Church, 444 E. Main St., Danville, IL 61832. Smith asked that people write “Sam Matthews” in the memo line.

Born in 2001, Sam Matthews was baptized by Msgr. Doug Hennessy at Holy Family Church. He served at Mass for Father Steven Loftus from 2013 until he graduated from high school.

“He was the first one we handed off the livestreaming to two years ago when we started during COVID, for Easter,” Father Loftus told The Catholic Post.

Sam’s brother, Daniel (better known as Mac), 18, has taken over livestreaming duties at church. Sam also has a sister, Audrey, 15.

A former teacher, Kari has been serving as a confirmation catechist at Holy Family.

“Everybody is just rallying around them and trying to do what they can to help them. Everybody who knows Sam loves him.” — Joanne Bibb, director of religious education, Holy Family Parish, Danville

Sam had been doing much of the work on his family’s farm just north of Alvin and was set to assume full responsibility from his father, Bruce, this year. Area farmers have been helping until their young neighbor recovers.

Sam stands 6 foot 5 inches and Father Loftus described him as “a gentle giant.”

“When you think of farmers, that’s what you think of — down to earth, gentle,” Father Loftus said. “Farmers have a natural humility to them because you can’t force nature to do this or that. You’ve got to take what you get.

In addition to making donations of money and gift cards, people are preparing and delivering meals to the family, according to Bibb.

“Everybody is just rallying around them and trying to do what they can to help them,” she said. “Everybody who knows Sam loves him.”

The most powerful remedy remains prayer.

“Thank you, thank you, thank you for your prayers,” Rose Mungovan Hoffman, an administrator at the “Sam updates” page on Facebook, wrote at the end of a post on Feb. 21. “Please don’t stop! Every prayer is making a difference!”