‘In the name of God, stop now!” Church leaders react to attacks on Ukraine 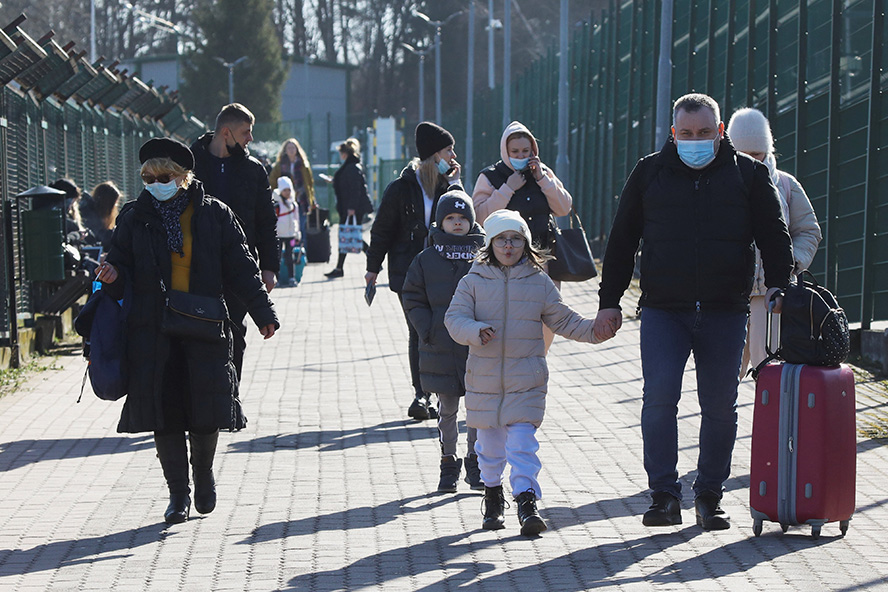 A family carrying their belongings walks at the border crossing between Poland and Ukraine in Medyka, Poland on Feb. 24 after Russian President Vladimir Putin authorized a military operation in Ukraine. (CNS/Reuters)

FLORENCE, Italy (CNS) — European Catholic leaders appealed for peace and expressed alarm about the potential for “a humanitarian catastrophe” after Russia attacked Ukraine.

“In the name of God, stop now!” wrote Archbishop Gintaras Grušas of Vilnius, Lithuania, president of the Council of European Bishops’ Conferences. 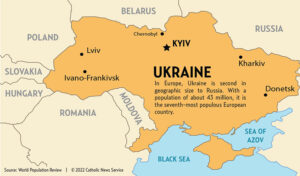 In Europe, Ukraine is second in geographic size to Russia. With a population of about 43 million, it is the seventh-most populous European country. (CNS graphic/Todd Habiger)

Writing from a conference in Florence, Italy, he said Feb. 24 that churches in Europe “strongly condemn what happened tonight in Ukraine. We must act together, and with determination, to put an immediate end to the Russian aggression and to do everything possible to protect innocent women, men and children,” the archbishop said.

He appealed for renewed dialogue.

“The European bishops and the Christian communities pray for the victims of this conflict and for their families. They unite with those who are suffering from these acts of violence, and they join Pope Francis’ call for prayer and fasting for peace: ‘May the Queen of Peace preserve the world from the madness of war.'”

Reacting to Russia’s wide-ranging attack on cities across Ukraine Feb. 24, Cardinal Jean-Claude Hollerich, president of the Commission of the Bishops’ Conferences of the European Union, said he was worried that the escalating military actions could open “the alarming scenario of an armed conflict causing horrific human suffering, death and destruction.”

UKRAINIAN ARCHBISHOP ASSURES PEOPLE THAT GOD IS WITH THEM

KYIV, Ukraine (CNS) — As Russia fired missiles on several Ukrainian cities and Russian troops reportedly landed in Odessa, the head of the Ukrainian Catholic Church affirmed the right of Ukrainians to defend their homeland and assured his people that God would watch over them. 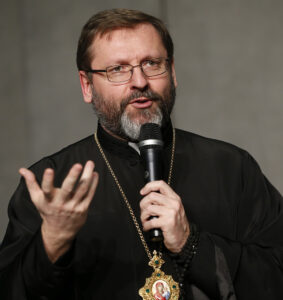 “At this historic moment, the voice of our conscience calls us all as one to stand up for a free, united and independent Ukrainian state,” said Archbishop Sviatoslav Shevchuk of Kyiv-Halych, head of the Ukrainian Catholic Church, in a statement to his people Feb. 24.

The archbishop was supposed to be in Florence, Italy, for a meeting with other bishops from Europe and around the Mediterranean, which Pope Francis was scheduled to address Feb. 27. Instead, Archbishop Shevchuk stayed in Kyiv with his people.

In a letter to the bishops in Florence, the archbishop said Ukraine was defending European values “at the cost of the blood of its children” and the whole country risked becoming “a death camp” because of Russian aggression. He pleaded with the bishops to pressure their governments to “help us defend peace in Ukraine and in Europe.”

Early Feb. 24, Russian President Vladimir Putin launched a wide-ranging attack on cities across Ukraine, after months of troop buildups near the Ukraine border. Russia said it only targeted military installations. A Kremlin spokesman said the attacks were “a special operation” and called it the “demilitarization and denazification” of Ukraine.

VATICAN SECRETARY OF STATE: THERE IS STILL TIME TO STOP “FOLLY” OF WAR 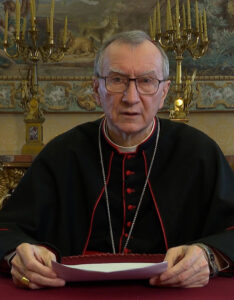 Cardinal Pietro Parolin, Vatican secretary of state, speaks in a message pleading for an end to the hostilities in Ukraine. (CNS/Vatican Media)

VATICAN CITY (CNS) — Despite Russia’s decision to begin military operations in Ukraine, there still is time to stop and “spare the world from the folly and horrors of war,” said the Vatican secretary of state.

Just hours after Russian President Vladimir Putin began a wide-ranging attack on cities across Ukraine Feb. 24, Cardinal Pietro Parolin, the Vatican secretary of state, issued a video message pleading for an end to the hostilities.

“In light of today’s developments in the crisis in Ukraine, we see even more clearly the timeliness of the clear and heartfelt appeal” made by Pope Francis Feb. 23, the cardinal said.

The pope had spoken at his weekly general audience of his “great sorrow” and his “anguish and concern” over the continued buildup of Russian troops on the Ukrainian border and Putin’s decision to recognize two areas of eastern Ukraine as independent.

Pope Francis, Cardinal Parolin said, “urged all parties involved to ‘refrain from any action that would cause even more suffering to the people,’ ‘destabilizing coexistence between nations’ and “bringing international law into disrepute.'”

WHERE TO GIVE TO HELP UKRAINE

WASHINGTON (CNS) — Various Catholic agencies are collecting donations to aid with the humanitarian crisis in Ukraine, as people flee to escape Russian bombing and shelling. Here are some places to donate. This list is not exhaustive.

The international Caritas confederation is collecting funds to help Caritas Ukraine. In the United States, that is through Catholic Relief Services: Internationally, you can donate through Caritas.org.

Two pontifical agencies also are taking donations for Ukraine: Catholic Near East Welfare Association and Aid to the Church in Need.