60 U of I students deepen love for Jesus at SEEK22 in Tennessee; ripples are spreading 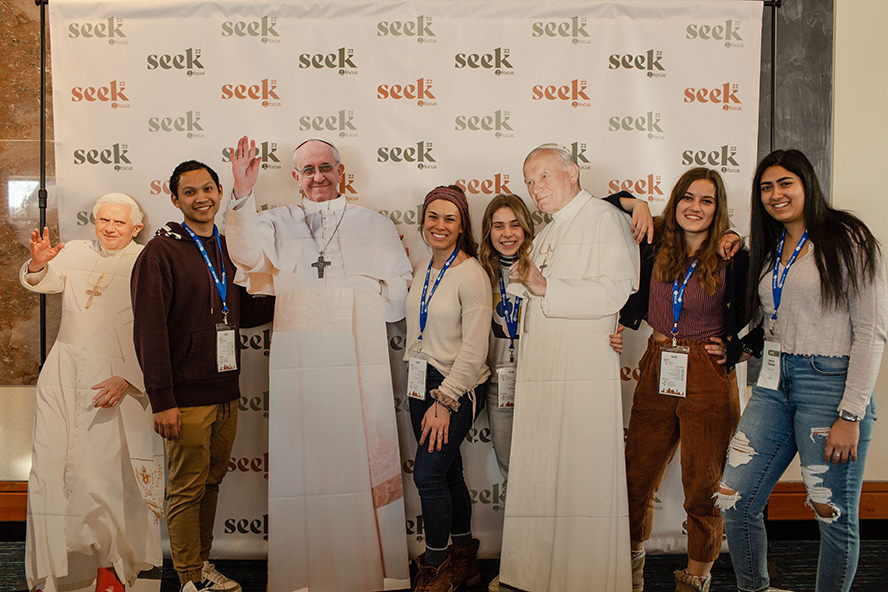 Students from the University of Illinois in Champaign pose with cutouts of Pope Emeritus Benedict XVI, Pope Francis, and St. John Paul II at a regional gathering of SEEK22 at the Knoxville Convention Center in Tennessee. (Provided photo/Ava Aubry)

Nearly 60 students from the University of Illinois in Champaign traveled to Knoxville, Tennessee, in early February for a regional gathering of SEEK22, a three-day event sponsored by the Fellowship of Catholic University Students (FOCUS) to help college students grow deeper in their love for Jesus and call them to mission. 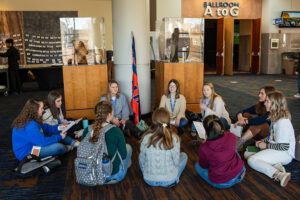 Students from the University of Illinois discuss a talk given during SEEK22 at the Knoxville Convention Center in Tennessee. (Provided photo/Ava Aubry)

And while the dates of the conference — a hybrid of regional gatherings featuring livestreamed as well as in-person talks — were Feb. 4-6, the ripples are continuing to spread.

“Since returning to campus, almost 30 students have taken tangible steps to grow in discipleship habits and commit deeper to a life that reflects following Jesus,” said Tanner Gosda, FOCUS missionary team director at the University of Illinois. In addition, last weekend St. John’s Catholic Newman Center on campus hosted the first of three “SEEK Encore” events to continue fellowship for those who traveled to Tennessee as well as others who could not attend.

“It has been fun to talk about the weekend with my friends who did not go and to share a bit about my faith with people in my classes who would ask what I did over that (SEEK22) weekend,” said Kate Oates, a University of Illinois sophomore. “Overall, it was an amazing weekend where I encountered the Lord, made new friends, and strengthened old relationships.”

The ripples also spread to Epiphany Parish in Normal on Feb. 19, where recordings of several keynote talks given at SEEK22 were shown throughout the day. “SEEK22 at Epiphany” began with Mass at 7 a.m. and continued until the evening, with breakfast, lunch, and dinner provided between the sessions, as well as opportunities for adoration of the Blessed Sacrament and recitation of the rosary.

The SEEK22 speakers included current Catholic powerhouses such as Father Mike Schmitz, a priest of the Diocese of Duluth, Minnesota, who hosts the “Bible in a Year” podcast; Sister Miriam James Heidland, a member of the Society of the Most Holy Trinity; Edward Sri, a theologian and author; Father Josh Johnson, a podcaster and vocations director for the Diocese of Baton Rouge, Louisiana; Sister Bethany Madonna of the Sisters of Life; and FOCUS founder Curtis Martin.

Among the questions they helped the college students and other guests consider were: Who am I? Who is Jesus? What is it Jesus taught? Why did Jesus die? How is God calling me?

Oates, who was attending her first in-person SEEK, said an in-person presentation in Knoxville by Catholic speaker and musician Paul J. Kim on “I Am Made New, I Am Not My Past” was the most memorable for her. Kim, who is widely known for his YouTube videos with Ascension, a faith formation platform, shared his conversion story and reflected on the importance of having a relationship with Mary.

The SEEK22 contingent from the University of Illinois pose for a group photo at the Knoxville Convention Center in Tennessee. (Provided photo/Ava Aubry)

“He spoke about how we are not defined by our past sins — that we are defined by who God has transformed us into,” recalled Oates. “He also spoke about how all of the saints sinned and had “pasts” which was very inspiring to hear. So often we only hear about saints’ great accomplishments, not the ordinary, everyday struggles they dealt with and we can relate with.”

The Knoxville regional took place at the city’s convention center and hosted students from 15 campuses in five states. Students, families and parish leaders also gathered at campuses, homes or parishes across the country.

The high point for Oates was adoration on Saturday night.

“It was so beautiful to be able to praise Jesus alongside more than 1,000 other college students,” she told The Catholic Post. During adoration, a priest walked through the crowd with the monstrance for individual encounters, and the sacrament of reconciliation was available. It is estimated 900 individuals received absolution that night.

NEXT YEAR IN ST. LOUIS

The University of Illinois contingent traveled nearly 10 hours through winter weather to reach Knoxville, but the experience was well worth the effort, said Kaitlin McFarland, director of retreats and Christian encounter at St. John’s Catholic Newman Center.

“It was exciting though to bring a lot of students from the U of I who had not yet experienced an in-person SEEK,” she said. Among them was sophomore Cori Martin, who is a small group leader on campus.

“I did SEEK last year,” said Martin, “but it was just at a missionary’s house (because of the pandemic). I loved all the talks so much last year and all the relationships I made from bonding with other people,” she continued, adding that she encouraged many other students to attend SEEK22.

Other activities throughout the weekend included special sessions for students involved in Greek life or athletics; playful but competitive rounds of Catholic-themed “Family Feud”; a prayer wall to write their intentions; praise and worship music; an online trivia board; pop song sing-alongs; and a bracelet making table to commemorate the weekend.

Near the end of the conference, FOCUS announced next year’s SEEK will return to a single, not-too-distant site: Jan. 2-6 in St. Louis.

Portions of this story were supplied from Catholic News Service reports.