The sick must be cared for in body and soul, says Pope Francis 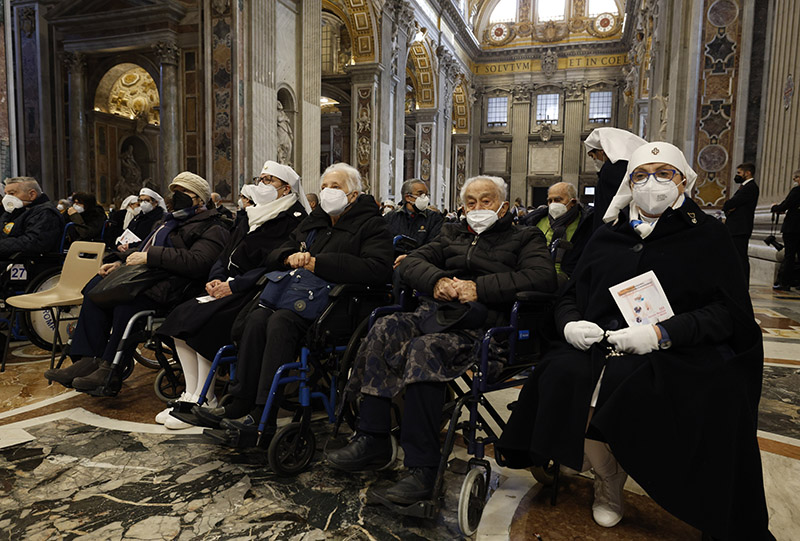 People in wheelchairs wait for the start of Mass marking World Day of the Sick, in St. Peter's Basilica at the Vatican on Feb. 11. (CNS/Paul Haring)

VATICAN CITY (CNS) — Caring for the sick means not only healing the wounds of the body but also those that afflict the soul, Pope Francis said.

“Care cannot be divided because the human being cannot be divided. We could — paradoxically — save the body and lose humanity,” the pope said in a video message on the eve of the 30th World Day of the Sick, which is celebrated Feb. 11 each year.

“The saints who cared for the sick always followed the Master’s teaching: heal the wounds of body and soul; pray and act for physical and spiritual healing together,” he said.

The pope’s message, which was released by the Vatican Feb. 10, was sent to participants of a webinar hosted by the Dicastery for Promoting Integral Human Development.

In his message, the pope said that the current pandemic “is teaching us to view illness as a global and not a merely individual phenomenon” and should motivate reflection on other types of “pathologies” that threaten humanity, including individualism and indifference.

These and other forms of selfishness, he said, generate inequalities, especially in the field of health care “where some enjoy so-called ‘excellence'” while many others “struggle to access basic health care.”

Cardinal Peter Turkson, former prefect of the Dicastery for Promoting Integral Human Development, echoed Pope Francis’ sentiments during his homily Feb. 11 at a Mass in St. Peter’s Basilica with people who are sick and with their caregivers.

Reflecting on the divine consolation that God gives to his children, Cardinal Turkson said Christians are also called to pass on that consolation to those who suffer in body and soul.

“Consolation means to encourage, to exhort, to comfort or to give joy to a person or community that finds themselves in a situation of sadness, anguish and desolation,” he said.

Those who dedicate their lives to consoling others, the cardinal said, draw inspiration from God who throughout history “has been close to a wounded humanity in order to comfort, strengthen and heal it.”

The commemoration of the World Day of the Sick, he added, is a “celebration of God’s works of mercy,” especially through those who work tirelessly in the health care field.

“May your hands, which touch the suffering flesh of Christ, be a sign of the merciful hands of the Father,” Cardinal Turkson said before he and the concelebrating bishops administered the sacramental anointing of the sick to many people in the congregation.