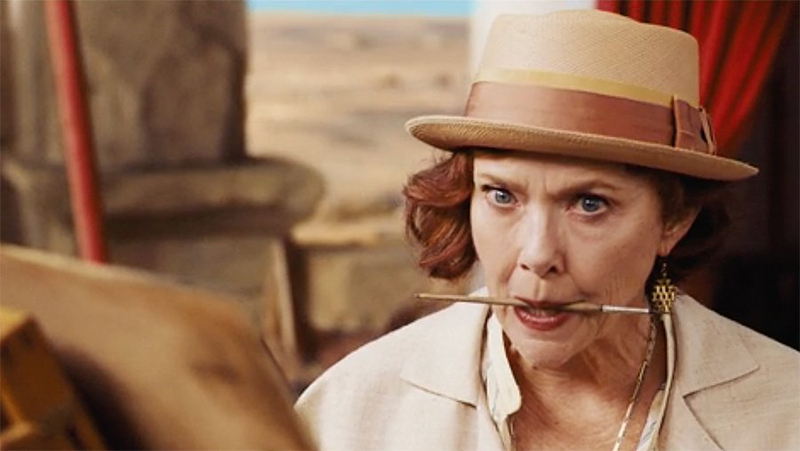 Annette Bening stars in a scene from the movie "Death on the Nile." The Catholic News Service classification is A-III -- adults. (CNS screen grab/20th Century Studios via EPK TV)

The tangled relationships linking an heiress (Gal Gadot), her newlywed husband (Armie Hammer) and the embittered woman (Emma Mackey) who was once both her best friend and his fiancee may or may not be the cause of fatal events during a cruise on the titular river. With an ensemble of suspects to choose from among his fellow passengers on the excursion (including Tom Bateman, Annette Bening, Russell Brand and Ali Fazal) acclaimed Belgian detective Hercule Poirot (Kenneth Branagh, who also directed) will need all his skill to unravel the mystery.

This visually elegant period piece, adapted from the 1937 novel by Agatha Christie, gets off to a skittish start but settles down into an intriguing whodunit that, as scripted by Michael Green, gains heft from its reflections on Poirot’s past. Probably acceptable for older teens.

Brief but intense combat violence, fleeting images of gore, scenes of sensuality, references to homosexuality, at least one use of profanity, several milder oaths. The Catholic News Service classification is A-III — adults. The Motion Picture Association rating is PG-13 — parents strongly cautioned. Some material may be inappropriate for children under 13.