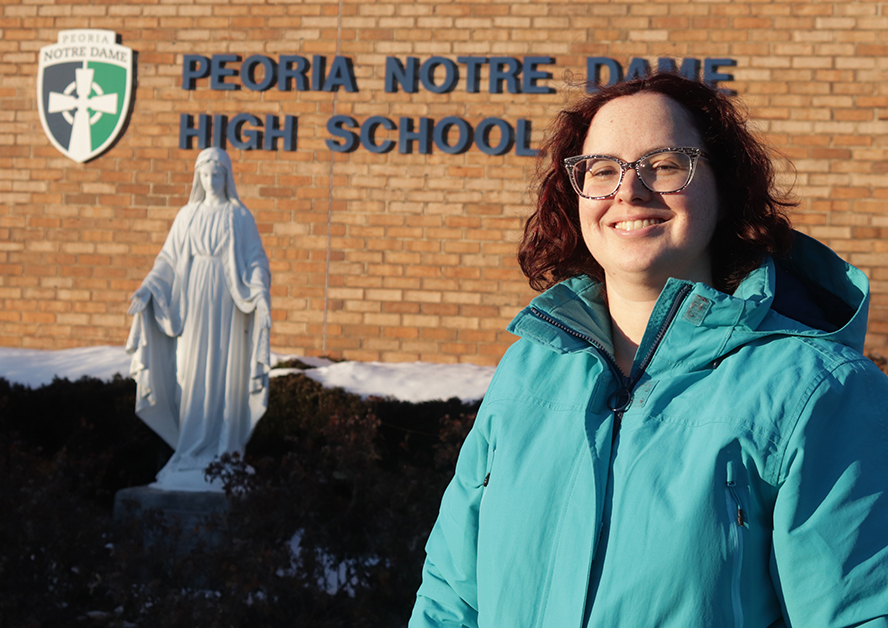 Christine Pinheiro teaches Latin and theology at Peoria Notre Dame High School and said some of her students may attend her consecration to the Order of Virgins on Feb. 5 at St. Mary's Cathedral in Peoria. (The Catholic Post/Jennifer Willems)

Christine Pinheiro smiles even before she answers a question about consecrated virginity.

Pinheiro will be consecrated to the Order of Virgins during a Mass at St. Mary’s Cathedral in Peoria next Saturday, Feb. 5. It will take place at 10:30 a.m. with Coadjutor Bishop Louis Tylka as celebrant and consecrator. 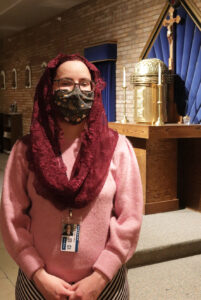 On most school days, Christine Pinheiro arrives at Peoria Notre Dame early enough for a Holy Hour followed by Mass. She also prays the Liturgy of the Hours and includes informal prayer throughout the day. Prayer is a firm foundation for consecrated virginity. (The Catholic Post/Jennifer Willems)

It is open to those who wish to offer prayerful support. Pinheiro anticipates that some of them will be her students from Peoria Notre Dame High School, where she teaches Latin and theology, and coaches Scholastic Bowl. She is also moderator of the Latin Club.

Taryn Watkins of Peoria, who was consecrated in 2019, has arranged for there to be a Holy Hour for Pinheiro on Thursday, Feb. 3, at St. Mary’s Cathedral. It will be held from 6 to 7 p.m.

The date for Pinheiro’s consecration was chosen because it is the Feast of St. Agatha, a virgin martyr who lived in Sicily from 231 to 251. Other virgin martyrs from the early days of the church are St. Lucy, St. Agnes and St. Cecilia.

While consecrated virginity became less common after religious orders were founded, the revised Rite of Consecration was promulgated on May 31, 1970, and is considered one of the “fruits” of Vatican II.

Even so, Pinheiro said even she didn’t know what Consecrated Virginity in the World was until she heard God calling her to himself.

From Champaign originally, Pinheiro went to the University of Illinois. She discerned early on that she wanted to go to graduate school for theology, so she majored in ancient languages in order to read the ancient and medieval authors.

She received her master’s degree from the University of Notre Dame in 2011, and decided to take a break from academia before going on for a doctorate. She was looking for a job in campus ministry or as a parish director of religious education when she found out Peoria Notre Dame had an opening for a Latin teacher and accepted it.

“When I was in college, I discerned religious life. I heard a firm ‘no’ from God,” Pinheiro said. “After that I assumed I must be called to marriage.”

Ten years later, in 2017, she was happy and single, but wanted to live a more purpose-driven life. She had heard about consecrated virginity by that time, but assumed if “I heard ‘no’ to consecrated life in college . . . I didn’t think I would get a ‘yes’ to a different form of consecrated life. So I didn’t decide against it, I just never even thought of it as a possibility.”

During prayer one night, God convinced her to rethink that.

“It was the most shocked I’d ever been in prayer,” she said.

“It was almost immediate acceptance,” Pinheiro recalled. “I was amazed at what a gift it was. Ever since then the discernment has been, ‘How do I live this out?’ and not so much, ‘Is this for me?’”

A GIFT FROM GOD

She contacted Msgr. Jason Gray, episcopal vicar for consecrated life for the Diocese of Peoria, and was accepted for formation in 2019. Two years later she received approval to be consecrated.

There is no official program for formation, so Pinheiro drew up her own plan and prayer schedule. Her reading list included some of the church fathers and the Vatican documents. In terms of prayer, she often arrives at school early for a Holy Hour in the chapel followed by Mass.

She is also responsible for praying the Liturgy of the Hours, especially Lauds (morning prayer) and Vespers (evening prayer), “but I like to say all of the same hours the priests and religious would.”

To prepare for her consecration, Pinheiro also went on retreat to Marytown and has been meditating on the Prayer of Consecration line by line.

“I feel like this is a gift God is giving me that he’s asking me to give back to him,” she told The Post.

As a bride of Christ, Pinheiro will wear a wedding dress and Bishop Tylka will present a veil, ring and breviary as part of the Rite of Consecration. The dress has special meaning for her.

“I’m a member of a Facebook group that is very supportive. They’re not consecrated virgins — most of them are married and mothers,” she said. “I’ve been sharing with them from the beginning of this journey.”

They got together and started a fund for the wedding dress and purchased the dress and veil for her.

“So the dress means so much to me because I love it and I think it’s beautiful, but also it’s a physical reminder of all the support I’ve gotten through this process,” Pinheiro said.