Marching for (our) change 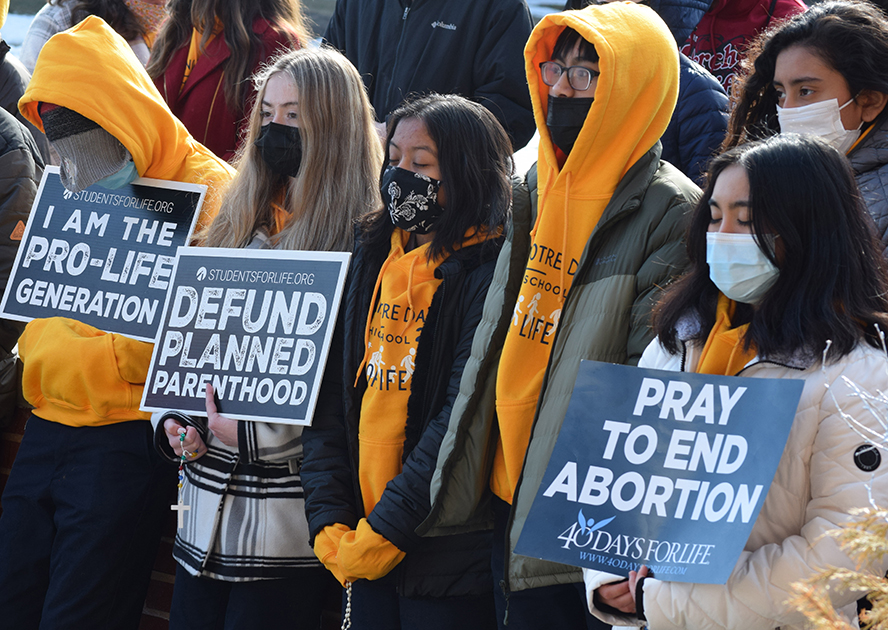 Students from Peoria Notre Dame High School hold signs as they join with representatives of five other high schools in praying the rosary for an end to abortion and the triumph of the culture of life on Jan. 21 outside the Spalding Pastoral Center in Peoria. (The Catholic Post/Tom Dermody)

The questions were posed by Father Mike Schmitz, a priest of the Diocese of Duluth and host of the wildly popular “The Bible in a Year” podcast, on Jan. 21 at the end of his brief remarks to a throng gathered in Washington, D.C., ready to take part in the national March for Life.

Father Schmitz recalled how his grandmother quit her job as head nurse at a hospital when it began performing abortions in 1973. His grandmother’s brave decision didn’t change the hospital’s position, but it changed her and would echo into other lives, including his own.

Among the 125 high school students from around the Diocese of Peoria watching Father Schmitz’ talk projected on big screens at the Spalding Pastoral Center in Peoria was Joey Cave, a junior at Peoria Notre Dame and member of its Teens for Life group. Like many of those around him, Joey had hoped to be on the National Mall and march to the Supreme Court that day, but concerns over the COVID-19 surge kept the diocese’s high school pilgrims at home. (See story here.)

The alternative events planned in Peoria, including a Mass celebrated by Coadjutor Bishop Louis Tylka, supplied many opportunities for the youth to be inspired and changed. And that will echo just as surely as if they had gone to the nation’s capital.

“I knew that our club didn’t have to be in D.C. in order to work towards change in our nation,” Joey Cave told The Catholic Post. “And I believe that everyone scattered throughout the nation celebrating simultaneously showed our relentlessness to never stop fighting and our true passion for what we believe.”

And that belief and passion, voiced and demonstrated by our youth, should inspire and change us. — Thomas J. Dermody