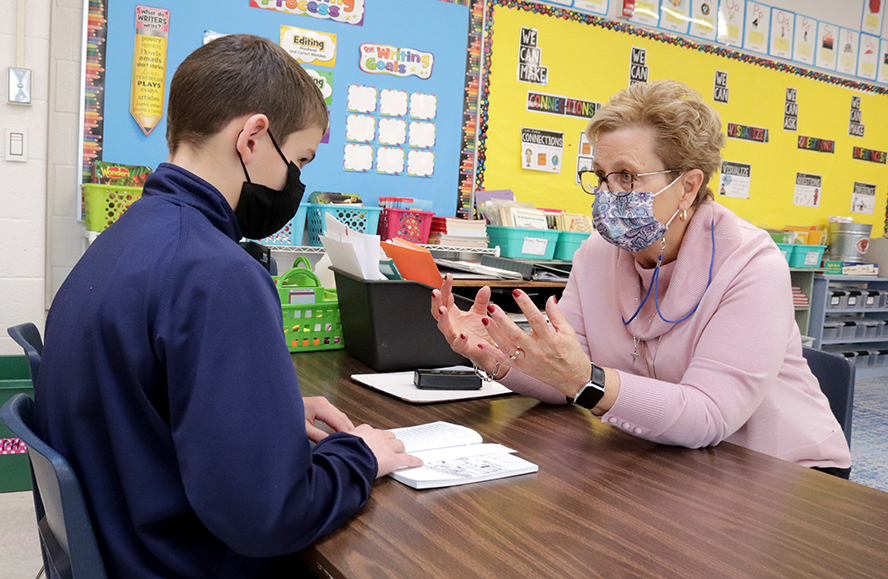 Patsy Santen, principal at St. Vincent de Paul School in Peoria, enjoys being in the classroom when she can. Here she is working with fifth-grader Patrick Rodgers, who is reading about the life of Henry Ford. (The Catholic Post/Jennifer Willems)

It isn’t unusual to see Patsy Santen leave the principal’s office at St. Vincent de Paul School in Peoria with a clipboard in her hand. With so many requests and things to document as part of a routine day, she doesn’t want to forget anything needed by her “family.”

“I’ve been blessed to have — as a principal in District 150 and here — a staff that works so well together. It’s like a big family,” she said. “When something happens we all figure out what we can do to help.” 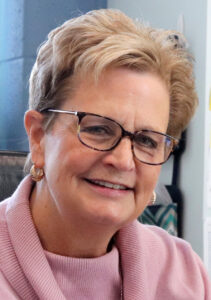 That family includes the 240 students at St. Vincent de Paul this year and their parents.

Getting to know the kids by name and personality is a joy for the longtime principal, as is sitting in the classrooms to “just observe great teaching.”

So while Santen was named the Distinguished Principal of the Year by the diocesan Office of Catholic Schools, she said it’s really a recognition for the work done by everyone at the school.

And after nearly two years of running a school even as they coped with COVID-19, every principal should be getting the award from the Diocese of Peoria, Santen said.

Santen grew up in a “very Catholic family” in St. Louis and attended Catholic schools through high school. She worked at summer camps in the area and discovered that she had a real heart for students with special needs.

“I really liked working with them. I’ve always felt I could help the underdog,” she said. “There was always that teacher in me.”

Now in her 46th year of teaching, she spent 29 of those years in Peoria Public Schools. In addition to teaching and serving as lead teacher at Irving Primary School, Santen would go on to work as assistant principal at Glen Oak School and principal at Thomas Jefferson School.

A fire at “TJ” taught her what it takes to navigate tough times as she oversaw the move of the student body to Loucks School and back again two years later.

Santen retired in 2013, but worked as director of preschool for the Regional Office of Education part time for a year. Missing people, she prayed, “I guess I must have a little bit more in me. Dear God, just help me get through it.”

God responded, disguised as Sarah Hogan, director of religious education at St. Vincent de Paul. “We have an opening,” she told Santen.

“It’s been an awesome journey,” Santen said of the last eight years as she prepares to try retirement a second time.

“Our eighth-graders were first-graders when I came here. To see that growth in the kids is very cool,” she told The Post. “They’ve matured and become leaders of the school. It’s just really nice to see that.”