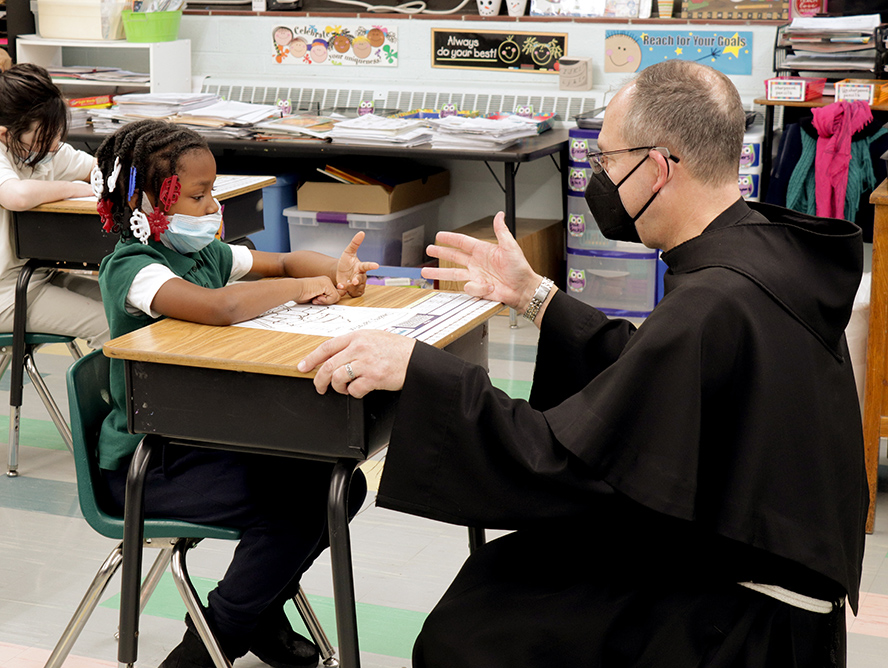 During a visit to Tuyen Witt’s second grade classroom, Father Paul Joseph Langevin, OFM Conv., talks over a math problem with Payton Blocker. He also talked to the students about their First Communion this spring. (The Catholic Post/Jennifer Willems)

Father Paul Joseph Langevin, OFM Conv., developed a love for Catholic education very early in life, as well as a desire to enter the priesthood. It would take God’s own timing to bring those two vocations together, however.

Now the pastor of Holy Family Parish and School in Peoria, Father Paul Joseph works hard to be present to the students when they’re dropped off each morning, comes during lunch, and makes it a point to visit and bless the classrooms.

“He’s instrumental in everything we do here,” said Stacie Gianessi, principal. “He just brings in everything that Christ embodies — the love of God and everything is made in the image of God. He brings all of that into the school.” 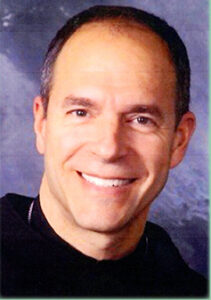 Service is another key component of his ministry, she said, noting that it’s not unusual to see him wiping off tables after breakfast in the morning.

“He’s done anything that needs to be done,” Gianessi told The Catholic Post. “Just a life of service — and it’s a great model for our students.”

For all of that and more, Gianessi nominated Father Paul Joseph to be the Distinguished Pastor of the Year. He will be recognized by the diocesan Office of Catholic Schools at a Mass at St. Mary’s Cathedral in Peoria on Tuesday, May 3. A luncheon will follow.

“I was just so shocked. I haven’t been a pastor that long,” he said. “Stacie must have written one heck of a letter.”

What makes him happy is seeing the excitement the award is bringing to the teachers, students and parishioners.

“They do all the work and I get the recognition. There’s something wrong with that model,” he said, laughing. “It’s all them. They make me shine. It’s their recognition.”

The youngest of Margaret and Thomas Langevin’s six children. Father Paul Joseph attended St. Joseph School in Maumee, Ohio. His mother was the second grade teacher there and the three boys and three girls often accompanied her each morning and helped her get things ready for the day.

His father put food on the table by working in the automotive glass industry, but it was his involvement and leadership in the parish’s St. Vincent de Paul Society that made an impression, Father Paul Joseph said.

“He wasn’t a preacher — faith and words. It was more so in action and, of course, the sacrifices that they both made,” he explained.

Those sacrifices made it possible for their children to attend Catholic schools and instilled in him an appreciation for the value of Catholic education. Their witness of fidelity and a life of service to their family and to each other also left their mark.

While Father Paul Joseph attended a high school seminary, Holy Spirit Seminary for the Diocese of Toledo, and flourished there, he got “cold feet’ before going on to the Pontifical College Josephinum.

He studied psychology at Bowling Green State University and earned his master’s in social work from the University of Michigan. As a clinical social worker, he spent eight years doing custody evaluations, mediation and change of custody orders in Ohio, and another 10 years with the Illinois Department of Children and Family Services in Chicago.

At 24, Father Paul Joseph had started to pull away from active participation in the sacraments and the life of the church and stayed away for 12 or 15 years by his count. God brought him “home” when a friend asked him to be his RCIA sponsor.

“The Holy Spirit sometimes has to clobber me pretty hard over the head,” Father Paul Joseph said. “Of course, when we were doing the RCIA, the floodgates just opened up tremendously. The hand of God had been leading me to this time and place.”

He started to discern the priesthood again, this time with the Archdiocese of Chicago.

“We’re convinced you do have a vocation, but it’s not with us,” he was told. “You won’t be fulfilled as a diocesan priest. You’re not called to a diocese, you’re called to religious life.”

Not five blocks from his condo was the Conventual Franciscan House of Studies and a “Come and See” weekend put all the pieces in place.

The community accepted him “and I haven’t looked back since.”

Father Paul Joseph attended Sacred Heart Seminary and School of Theology at Hales Corners, Wisconsin, while in residence at the Basilica of St. Josaphat in Milwaukee. He was professed on July 16, 2010, and ordained on May 24, 2014.

Father Paul Joseph served as parochial vicar at Holy Family in Peoria from 2014 to 2016, and returned as pastor in 2018.

As a school pastor, he wants the students to know that Jesus can have a profound impact on their lives by how they talk to one another, treat one another, and support one another.

“We are to live our lives profoundly different than what the culture is kind of putting out there. We have to be that witness for the world,” Father Paul Joseph said. “If we can accomplish that, if they can carry that with them, what a difference they’re going to make.”