Unable to go to national March for Life, students pray, rally together in Peoria 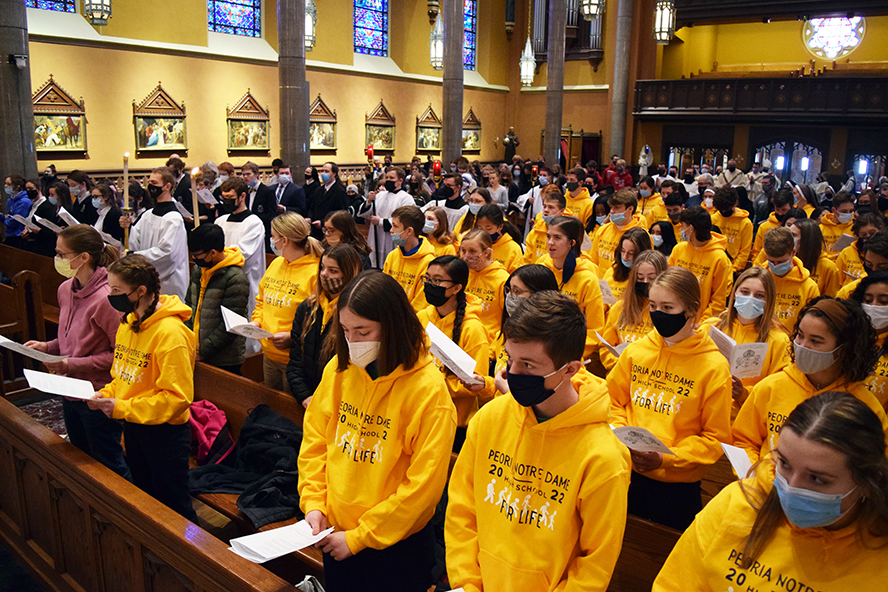 Wearing specially designed hoodies they had hoped to unite them at the national March for Life that day, students from Peoria Notre Dame are seen in the foreground during the opening procession of a Respect Life Mass celebrated at St. Mary's Cathedral in Peoria on Jan. 21. Five other high schools were represented at the Mass. (The Catholic Post/Tom Dermody)

Sharing the disappointment felt by many Catholic high school students in the diocese at not being able to attend that day’s national March for Life in Washington, D.C., Coadjutor Bishop Louis Tylka offered a memorable lesson Jan. 21 to those attending alternate events planned for them in Peoria.

Bishop Tylka urged the students, and all who promote respect for life, to remember the “Four C’s” — conviction, convincing, consistent, and compassion. 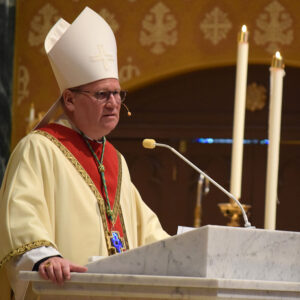 In his homily at a Respect Life Mass on Jan. 21, Coadjutor Bishop Louis Tylka outlined the “Four C’s” that are essential for the movement’s credibility — conviction, convincing, consistency, and compassion. (The Catholic Post/Tom Dermody)

“These are elements, in my opinion, that are essential for us to have credibility,” he said at a Respect Life Mass at St. Mary’s Cathedral opening a day of activities that drew nearly 150 high school students, chaplains, and chaperones from six schools. They included Peoria Notre Dame and Chesterton Academy of the Sacred Heart in Peoria; Central Catholic High School in Bloomington; The High School of Saint Thomas More in Champaign; Marquette Academy in Ottawa; and Alleman High School in Rock Island.

The students from Notre Dame and Central Catholic wore colorful, specially designed hoodies they had hoped would unite them as they marched in the nation’s capital. But on Jan. 7, the dramatic spread of COVID-19 fueled by the omicron variant led diocesan officials to cancel high school participation in the march, held annually near the anniversary of the 1973 Supreme Court decisions legalizing abortion.

THE “FOUR C’S” OF RESPECT FOR LIFE

“It is certainly good that we are gathered here today to give witness to our commitment to work for a greater respect for life,” Bishop Tylka said in opening his homily at the cathedral Mass. “It is unfortunate that we weren’t able to travel to Washington as we had originally planned. God willing, next year, we will be able to do so.”

Even if a highly anticipated Supreme Court decision later this year “goes in our favor” and effectively overturns Roe v. Wade, Bishop Tylka said further challenges to promote and defend the sacredness of human life from conception to natural death will remain.

To that end, he outlined the “Four C’s” to be embraced and practiced, including:

Following Mass, the students walked to the nearby Spalding Pastoral Center, where they viewed the pre-march rally from Washington, D.C., projected on three large screens in the conference room. Like the tens of thousands present in the nation’s capital, the students broke into frequent applause during the various speeches, including when Jeanne Mancini – March for Life president — expressed the hope that 2022 “will bring an historic change for life.” 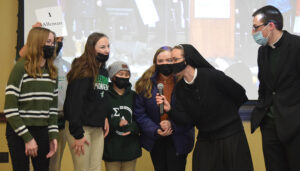 A group from Alleman High School in Rock Island, including senior theology teacher Sister M. Bernadette, FSGM, and Father Nicolas Wilson, chant “Protecting life has just begun, for this cause we are one” during a creative contest at the Respect Life program at the Spalding Pastoral Center in Peoria. (The Catholic Post/Tom Dermody)

During lunch, each of the 18 tables of students was asked to come up with an original chant they might have voiced had they been at the national march. The students, as well as their chaplains, embraced the creative challenge.

“Protecting life has just begun, for this cause we are one!” chanted a group from Alleman with an enthusiasm that had Father Nicholas Wilson leaping on each beat.

To the tune of “Y-M-C-A,” complete with accompanying hand motions, a table from Central Catholic chanted “We’re marching for the B-A-B-Y, we need to save the B-A-B-Y.”

Tables from Peoria Notre Dame added cartwheels and flips as they chanted phrases including “Every life is worthy of love, we’re all a gift from God above.”

The youth then turned to prayerful energy as the day ended with a rosary near a Mary statue on the pastoral center grounds, and then a walk back to St. Mary’s Cathedral for a Holy Hour of adoration of the Blessed Sacrament.

The day’s program was planned by Peoria Notre Dame’s Teens for Life group, which brought the largest contingent — 68, including chaperones.

“We’re in a spiritual battle here,” said Sister Lucia Maria Sol, SCTJM, campus minister at Peoria Notre Dame, who served as emcee along with teacher Shelby Harrison and seminarian Ryan Mann, who is spending a year on the campus ministry team.

Sister Lucia told the students they were with the national marchers in spirit “for the end of abortion and the triumph of the culture of life and love.” 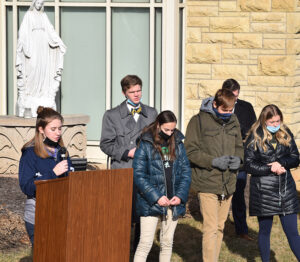 Kaitlyn Magoonaugh of Marquette Academy in Ottawa, leads a decade of the rosary for high school pro-life pilgrims outside the Spalding Pastoral Center in Peoria on Jan. 21. Other decades were led by, from left, Daniel Zalazinski of Chesterton Academy, Peoria; Ashlyn Sullivan of Alleman in Rock Island; Jack Breummer of Central Catholic in Bloomington, and Mary Kathryn Kluesner of The High School of Saint Thomas More, Champaign. (The Catholic Post/Tom Dermody)

Speaking on behalf of the students, Father Andru O’Brien — chaplain at The High School of Saint Thomas More — led a round of grateful applause for the efforts of the organizers.

“We were all very sad we weren’t able to travel to D.C.,” said Father O’Brien, “but we want to thank you for making today such a great alternative.”

For Lucy Herr, a freshman at Central Catholic, the day was “an upgrade” because at her school only juniors and seniors make the annual pilgrimage.

“There are a lot of students I didn’t know here, and it was cool to be around them,” she told The Catholic Post. “It was a good opportunity to see all the speakers on the livestream, and to go to Mass.

“And I was warm,” she added with a smile, noting most of the events were inside on the frigid day.

Peoria Notre Dame junior Joey Cave also cited the fellowship shared with students he did not know from the other schools. “Funny enough, that most likely would have been my favorite memory had we gotten to go on the national march in D.C. this year,” he said.

Click here for an archived video or the Respect Life Mass.