Sacred Heart Parish, Rock Island, is a pioneer in the use of QR codes 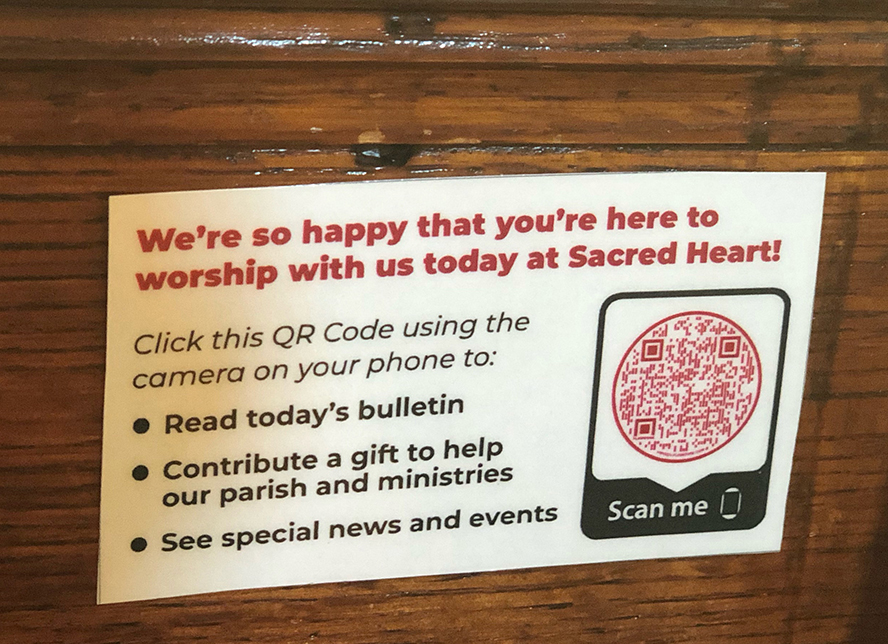 A business card-sized welcome message including a QR code for scanning by smartphone cameras is seen on the back of a pew at Sacred Heart Church in Rock Island. (Provided photo)

ROCK ISLAND — Are QR codes coming to a church pew near you?

That question would make no sense to Catholics just a few years ago. But as the square bar codes — the QR stands for “quick response” — become more utilized by restaurants and other businesses, the church is giving them a try as well.

QR codes allow people to use their smartphones to access a dedicated website. Users point their smartphone camera at the code, and a link appears. In the case of a restaurant, that link might take customers to the day’s menu.

The Diocese of Peoria utilized a QR code in its promotion of the 2021 Annual Diocesan Appeal, and the Office of Priestly Vocations sometimes places one on promotional posters to direct people to resources on its website, comeandfollowme.org.

QR codes are even making inroads at the Vatican. Visitors to St. Peter’s Square can use their smartphone cameras not only to take a photo of a sculpture, they can also use them to scan a QR code at its base to learn more about the work.

IN THE PEWS AT SACRED HEART

One parish pioneer in the Diocese of Peoria is Sacred Heart in Rock Island. Late last summer, business card-sized signs including a QR code were affixed to the backs of pews just above the missalette holders.

“We’re so happy that you’re here to worship with us today at Sacred Heart,” the signs read.

The accompanying QR code takes Mass attendees to a landing page on the parish website where they can access the parish bulletin, make a donation, find a form to join the parish, sign up for text notifications, and see additional content such as updates on Sacred Heart’s approaching 125th anniversary celebration.

“We felt people were primed for us to try this now,” said Chris Mandle, a parish trustee who also assists with technology and communication at Sacred Heart. In addition to the increasing familiarity with the codes and how to use them, Mandle points out that in these days of pandemic concerns the codes afford “contactless giving.”

Noting that people are less frequently carrying cash or checks, Mandle said the QR code is an effort “to meet (parishioners) where they are.”

“I used to joke that you’re going to have to start passing an iPad up and down the pews at collection time because that’s how people operate these days with their plastic,” Mandle told The Catholic Post. “But I don’t know how sanitary that would be, either.” The QR code allows worshippers to use their own phones.

Mandle, who has his own graphics and web design business, convinced Father Luke Spannagel, pastor, to give the QR code a try. He reports there has been a steady increase in use since the code debuted in late August. That increase is especially noticeable during Masses with higher numbers of visitors, such as Christmas or when Coadjutor Bishop Louis Tylka visited, also in December.

The sign and code were intentionally kept tiny to avoid distracting from the beauty of the church. Mandle said the code would ideally be scanned just before leaving after Mass.

“It’s a tool for them,” he said. “Hopefully the usage keeps going up. We’ll keep an eye on the data.”