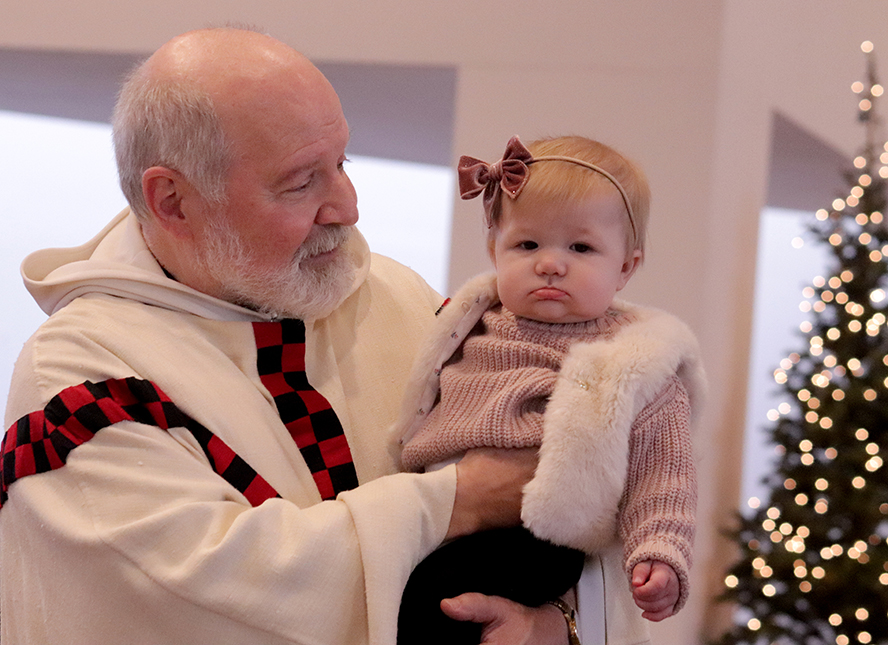 Father Ronald Margherio, OSB, chaplain at St. Bede Academy in Peru, holds Londyn Irene McClain, who is helping him with a homily at the school's Epiphany Mass on Jan. 6. "Did you ever think that God holds you that way," he asked the students. (The Catholic Post/Jennifer Willems)

PERU — Londyn Irene McClain wasn’t quite sure what to make of Father Ronald Margherio, OSB, who held her in his arms while he gave his homily during an Epiphany Mass at St. Bede Academy, but she didn’t interrupt him. Just 8 months old, she played her part well as he talked about God’s love for us.

“We’re not speaking words, but we’re talking to each other,” the St. Bede chaplain told the students as he looked into his young guest’s eyes Jan. 6. “The other thing we do is just the way we hold them in our arms, the comfort they feel.” 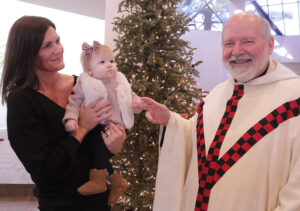 Father Ronald spends a minute with 8-month-old Londyn Irene McClain, before her mother, Bridget McClain, bundles her up for the ride home. (The Catholic Post/Jennifer Willems)

Father Ronald also noted that he had been bouncing and walking as he held Londyn Irene, daughter of Bridget and Don McClain and little sister to Quinn, a freshman at St. Bede.

“You were once held that way,” he told the students, asking them to take one more step.

Just as God cradles us day in and day out, we are asked to cradle others as we share our gifts with them, Father Ronald said.

The Epiphany Mass at St. Bede welcomed the students back after their Christmas break, but it also marked a new beginning for the Abbey Church, which is being “refreshed.”

“It’s more of a restoration than a remodel or renovation,” said Eve Postula, superintendent of St. Bede Academy, and follows much-needed repairs to the skylights and windows in the Abbey Church. 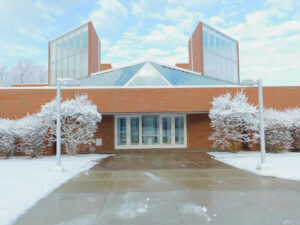 The church was built during Abbot David Duncan’s term as spiritual leader of St. Bede Abbey. Ground was broken in 1972 and the worship-assembly building was dedicated by Bishop Edward W. O’Rourke on Oct. 6, 1974.

“In this unique, beautiful, modern building, really one of the biggest features is all the windows and the skylights,” Postula said. But the ultraviolet damage of the sun and the breakdown of the seals compromised the watertight capabilities of those windows.

“So we’ve had a lot of leakage over the last 10 to 15 years that has caused damage on the interior of the church — unfortunately to the drywall and even to the carpeting,” she explained.

About a year ago, St. Bede made it a priority to address the issues before “this beautiful building, the center and heart of our spiritual life on campus” deteriorated any further.

Kevin Micheli, president and chief operating officer of Charles Hall Construction and a 1994 graduate of St. Bede, stepped up to spearhead the project to repair the exterior and restore the interior of the church. He has been doing it in memory of his father, John, who was a longtime supporter of the academy.

The repairs and restoration were also adopted as the “fund a need” priority at the St. Bede Auction last June. The estimated cost of the work was $210,000, with Micheli donating the first $5,000. People responded in a big way, offering $215,000 that night and continuing to send donations in the weeks that followed.

The last step will be to replace the carpeting.

While the church is closed, the monastic community will gather for prayer and daily Mass in what had been known as the Student Chapel. School Masses will move to the gymnasium. 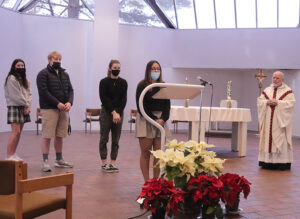 St. Bede Academy students read the Prayers of the Faithful during the Epiphany Mass on Jan. 6 as Father Ronald Margherio, OSB, chaplain and celebrant, looks on. It was the last school Mass celebrated in the Abbey Church, which is being “refreshed” in January and February now that the windows and skylights have been repaired. (The Catholic Post/Jennifer Willems)

There will be no public Masses on the weekend.

The goal is to be back in the Abbey Church for Ash Wednesday Mass for the students and monks.

“So it will be a small sacrifice and short interruption, but I think the timing is as good as we can get,” Postula told The Catholic Post. “Once the work is finished, we’re looking to plan a rededication and a blessing of the repaired church.”

Other than the mandatory shutdown that sent everyone home in March 2020 due to COVID-19 and lasted for the rest of that school year, St. Bede Academy offered in-person instruction for the 2020-2021 school year and continues to do so for the 2021-2022 academic year.

“It has really made a difference for our ability to maintain the quality of education as best as possible. Also important, teenagers just thrive in a schedule and feed on the social interaction, and that helps their maturity and their confidence and their desire to continue learning every day,” Postula said.