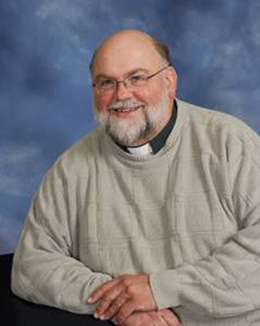 CLINTON — A funeral Mass will be celebrated at St. John the Baptist Church here at 11 a.m. on Thursday, Jan. 6, for Father James Henning, OFM Conv., who served as pastor of the Clinton parish as well as Sacred Heart Parish in Farmer City since 2006.

Father Jim died on Dec. 30, 2021, at Accolade Healthcare of Pontiac after an extended illness. He was 69.

His body was received on Wednesday, Jan. 5, at Sacred Heart Church, 612 N. Plum St. in Farmer City. Visitation, followed by a Franciscan Wake Service, is planned there from 4 p.m. to 6 p.m.

Father Michael Zielke, OFM Conv., minister provincial of the Conventual Franciscans’ St. Bonaventure Province, will be principal celebrant of the funeral Mass at St. John the Baptist Church, 502 N. Monroe St. in Clinton. The homilist will be Father Paul Joseph Langevin, OFM Conv., pastor of Holy Family Parish in Peoria. (Click here for a full transcript of the homily.)

The Mass will be livestreamed at https://www.facebook.com/stjohnsclintonil/videos. Interment will follow at St. Joseph Cemetery in Farmer City.

Born on Sept. 25, 1952, on the far northwest side of Chicago, he was the fourth child of the late Walter and Elizabeth Henning. The family were members of St. Robert Bellarmine Parish, and Father Jim graduated from the parish school before attending Steinmetz Public High School and later Wilbur Wright Junior College.

While in college, he was hired by UPS, where he worked an early morning shift for five and a half years.

He graduated from DePaul University with a bachelor of science degree in commerce, but soon decided to explore a vocation to the priesthood.

He was ordained to the priesthood on June 4, 1982, by Bishop Arthur J. O’Neill of Rockford.

Father Jim’s first and last assignments were in the Diocese of Peoria. From 1982 to 1984, he was an assistant at Holy Family Parish in Peoria. Subsequent appointments took him to the Basilica of St. Josaphat in Milwaukee; Good Counsel High School/Felician Sisters Motherhouse in Chicago; St. Hedwig Parish in Detroit, his first pastorate; the Michigan parishes of St. Roch in Flat Rock and Sts. John and Paul in Washington, both as administrator; St. Genevieve Parish, Chicago; St. Joseph Home in Lake Zurich, where he served as chaplain; the Conventual Franciscan Mission Office; and Our Lady Queen of Angels Parish in Detroit, as pastor.

In 2006, Father Jim was appointed pastor of the faith communities in Clinton and Farmer City, as well as St. John Parish in Bellflower, which was merged into the Farmer City parish in 2017. He would serve until health issues necessitated his retirement in late 2020.

He is survived by two brothers, Patrick and Timothy, and was preceded in death by a brother, Michael, and a sister, Rita Sturgis.

Memorials may be made to the Conventual Franciscan Friars of Marytown, Chapel Preservation, 1600 W. Park Avenue, Libertyville, IL 60048.