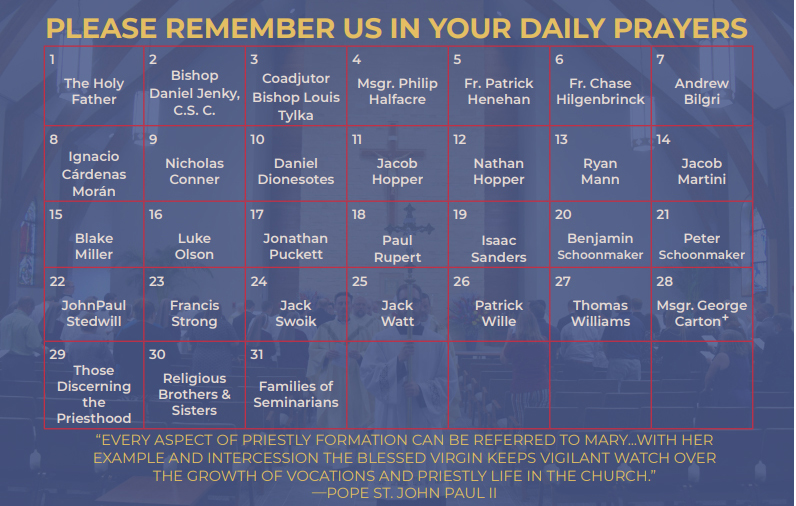 The Office of Priestly Vocations has developed a monthly prayer calendar that includes the 21 seminarians, their families, our bishops, vocations leaders, and others.

Seminarians who returned to the Diocese of Peoria for Christmas consider these visits “grace-filled times,” not just because they get to see their families and friends, but because they have encounters with the people they will serve someday.

“It can be easy to lose sight of our purpose while we are occupied with the busy routine of seminary life,” said Nicholas Conner of Peoria, who is in his second year of theology studies at Mount St. Mary’s Seminary in Emmitsburg, Maryland.

The Diocese of Peoria’s seminarians are pictured with Bishop Jenky and Coadjutor Bishop Tylka as well as vocation directors Father Hilgenbrinck and Father Henehan. (Provided photo/Office of Priestly Vocations)

“The time we spend back in the diocese has always been a great consolation for me because it provides experience to the sometimes abstract discernment we are asked to do,” he explained.

This gift of time is just one of the ways the people of the Diocese of Peoria can support seminarians at Christmas and throughout the year.

“We desire your prayers on our behalf so that we may be faithful and receive the grace of God to persevere in our vocations,” said Patrick Wille of Dunlap, a third-year theology student at Mount St. Mary’s. “It’s a great gift to have this time in seminary, and we would be encouraged to know of your prayers for us and how we may pray for you.”

“It’s at the very heart of their vocation, the desire to give themselves,” he said. “You actually help to foster that desire in them when you tell them what particularly they can pray for your family for.”

Father Patrick Henehan, diocesan vocation director of formation and pastor of St. Jude Parish in Peoria, said that while the prayer for the seminarians is essential, it doesn’t have to be complicated.

“Simpler is better,” he told The Catholic Post, noting it could be something from a favorite prayer card offered before going to bed. 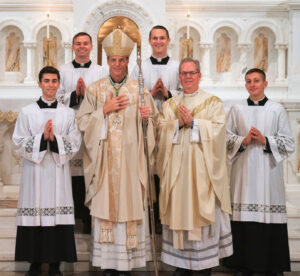 Bishop Stephen Parkes of the Diocese of Savannah presided over the Mass of Candidacy at Mount St. Mary’s Seminary on Nov. 19. He is surrounded by seminarians from the Diocese of Peoria (from left) Jack Watt, Francis Strong, Jacob Martini, and Ben Schoonmaker, who publicly expressed their intention to continue their formation for the priesthood. With them is Msgr. Andrew R. Baker, seminary rector. (Provided photo)

A decade of the rosary prayed as a family for a particular intention is also powerful, according to Father Henehan.

“One, it prays for our guys who are in the seminary, and two, it promotes to their children the potential of a vocation in the future,” he said. “Promoting that culture of vocations is key.”

The Office of Priestly Vocations has developed a prayer calendar that includes the 21 seminarians, as well as Pope Francis, Bishop Daniel R. Jenky, CSC, Coadjutor Bishop Louis Tylka, those discerning the priesthood, religious Brothers and Sisters, and the families of seminarians. (See the featured image of this story.)

Father Hilgenbrinck said living the faith by offering a Mass or Holy Hour for the seminarians, or praying a rosary or novena also helps the men who are discerning their vocation to the priesthood.

Wille said Father Henehan often tells them that there are four main dimensions that should be foundational to their lives as seminarians: eucharistic, Marian, fraternal, and academically excellent.

“If you would like to support seminarians, sharing in these dimensions in your own lives would be a great way to do so,” he told The Post. “You could grow with us in your own knowledge of the faith by joining a Bible study or faith formation opportunities available at your parish.”

Handwritten notes are another way people can gift the men at Mount St. Mary’s, as well as Immaculate Heart of Mary Seminary in Winona, Minnesota, Father Hilgenbrinck said.

“Everybody gets emails and everybody gets on social media,” he said. “But when you took the time to sit down and write, there’s something really special about that.”

If you remember a seminarian who served your parish during the summer, tell them that and reintroduce yourself, Father Hilgenbrinck advised, adding, “If you think that they would be a good priest someday, tell them that.”

“I think everybody presumes they’re going to be priests. These guys are not priests — they’re discerning right now,” he said. “They have a lot of questions in their head and they wonder if they would be good. They wonder if anybody else believes what they believe.”

While the seminarians receive encouragement from Bishop Daniel R. Jenky, CSC, Coadjutor Bishop Louis Tylka, and the vocation directors, hearing it from the people of the diocese provides a personal touch from “home,” Father Hilgenbrinck said.

A gift on top of this gift would be to let the seminarians know they’re not obligated to write back, Father Henehan said, noting that their seminary studies can be intense.

“We know Jesus sent the disciples out two by two,” he said. “When we feel isolated and alone, the more we get support, we do better.”

To “meet” the seminarians and find out where they’re studying, visit comeandfollowme.org.