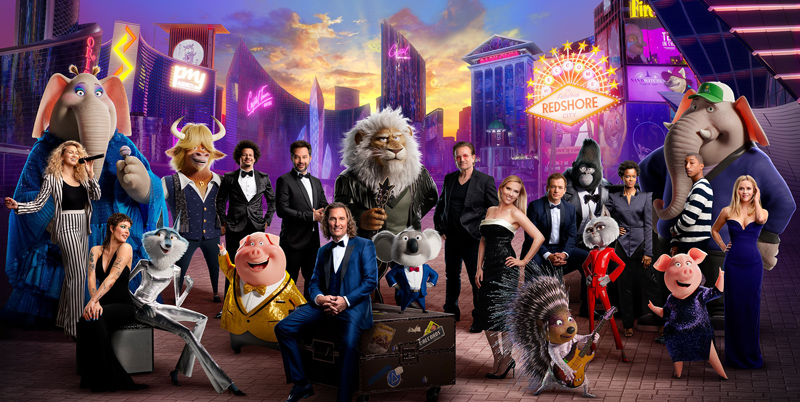 This is an image for the movie "Sing 2." The Catholic News Service classification is A-II -- adults and adolescents. (CNS/Universal)

Writer-director Garth Jennings’ follow-up to his 2016 animated jukebox musical finds that comedy’s ensemble of animal entertainers aiming for the big time. Led by the koala theater owner (voice of Matthew McConaughey) who brought them together in the kickoff, the singers and hoofers (voiced, among others, by Tori Kelly, Reese Witherspoon, Scarlett Johansson and Nick Kroll) aspire to become headliners in a fabled, Las Vegas-like city. To do so, they’ll have to follow through on their impresario’s rash promise to a lupine media magnate (voice of Bobby Cannavale) that their show will feature a legendary lion rock star (voice of Bono, in his acting debut) who, for 15 years, has been one of the world’s most famous recluses.

Amid the wild scramble that follows, Jennings’ script deals with a series of topics, such as self-doubt and the ability to deal with setbacks as well as bullying, privilege and popularity, that may especially resonate with teens. It also highlights themes of empathy, honesty and the means of coping with grief. Too scary for little kids, this film, fueled by familiar tunes and buoyed by enjoyable humor, is on target for most others.

Characters in peril, brief mature references. The Catholic News Service classification is A-II — adults and adolescents. The Motion Picture Association rating is PG — parental guidance suggested. Some material may not be suitable for children.