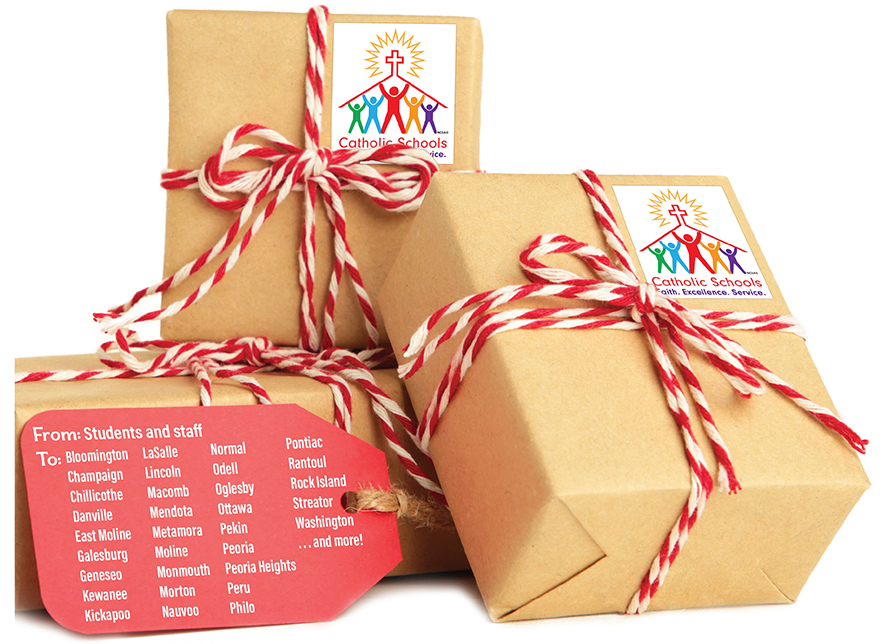 Students and faculty at St. Malachy School in Geneseo celebrated Thanksgiving by collecting food items for the Geneseo/Atkinson Food Pantry and offering them during a school Mass. Principal Tim Smith said it was obvious one third-grader had something on her mind, however.

“She turned around to me and said, ‘Mr. Smith, I need to go back to my classroom.’ This little girl is very serious, very intentional,” he told The Catholic Post. “I was moved to allow her to do that.”

She had not brought a food item, so she grabbed the only thing she had — a granola bar she had been saving for her snack that day. She presented that when she returned to church. 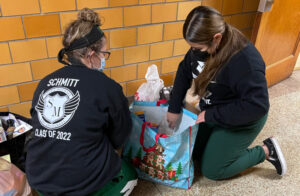 Student Council members at St. Michael the Archangel School in Streator sort and prepare bags of donated food for the Streatorland Food Pantry. Their annual effort seemed more popular this year than ever before, with 1,500 dry goods, canned goods and paper products collected. (Provided photo)

“It was just an incredible, moving experience,” Smith said. “I was like, ‘Wow. I have a little saint sitting in front of me.’”

This is the longtime administrator’s first year in a Catholic school and he said he loves witnessing how the children live out their faith and being charitable with what they have.

This is how Catholic schools are a gift to the communities they serve, not just at Christmas but throughout the year, according to Dr. Sharon Weiss, superintendent of schools for the Diocese of Peoria.

“Service learning really comes out of the works of mercy and from social justice,” she explained. “This is lifelong learning. This is not just something they learn in school, but we pray we might plant the seeds in school of how to perform these works of mercy and that they’ll continue to do this for their lifetime.”

“It’s just part of who we are by always giving back and helping others,” said Lisa Gray, principal of Sts. Peter and Paul School in Nauvoo. “It’s what God asks us to do, to go out and to look at what others may need — to reach others, to show others that it’s not just all about me.”

PEOPLE ARE IN NEED

Emily Blumenshine, principal at St. Michael the Archangel School in Streator, said she established the Student Council six years ago to be a service organization.

“It’s what God asks us to do, to go out and to look at what others may need — to reach others, to show others that it’s not just all about me.”– Lisa Gray, principal, Sts. Peter and Paul School in Nauvoo

“Their mission is to give back to the community,” she said. “Throughout the school year they do a couple different service projects, their number one being a food drive around Thanksgiving every year. This year we had an overwhelming amount of donations, so it’s probably our biggest year yet.” 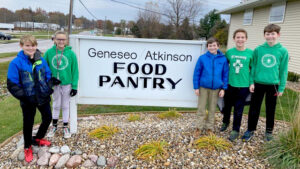 In addition to planning the food drive, the students are responsible for contacting the Streatorland Food Pantry to ask about what the greatest needs are each year. This year the request was for dry goods, canned goods and paper products, and St. Michael had more than 1,500 of these items to donate by the time the two-week drive had ended.

The Student Council is now conducting a toy drive, with contributions earmarked for Toys for Tots.

As with many other schools around the diocese, St. Michael students have adopted grandparents or residents at local nursing homes and they correspond with one another, Blumenshine said, adding that they eventually hope to resume in-person visits.

“I remind them that we still have to figure out a way to give back to the community because people are in need now more than ever, whether it be for just friendship or actual service, of food, toys, help,” she said.

Service learning is so important in Catholic education, that one day of Catholic Schools Week each January is devoted to giving back to the community. Gray said they plan one activity designed to help others during the week, such as raising money for Ronald McDonald House or St. Jude Children’s Research Hospital.

Last year, the students donated more than $1,200 to benefit Food for Thoughts, a weekend food pack program for children in Hancock County.

“At Grace our motto is ‘Enter to Learn, Exit to Serve.’ So we always have service projects like these going on.” Jim Caparula, principal, Our Lady of Grace Catholic Academy, East Moline

Following the Gospel call to feed the hungry, give drink to the thirsty and clothe the naked, Holy Cross School in Mendota worked with the Daughters of Divine Love to support the Haitian Relief Fund in October, and collected canned goods to replenish the local food pantry in November, said Michael Struna, principal. December’s focus is “Christmas Cards for Veterans.” 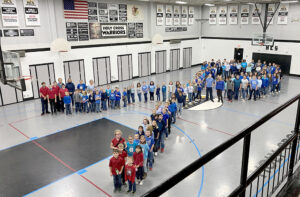 To show their support for classmates who live with diabetes, the students at Holy Cross School in Mendota form a blue ribbon with red on each tip as a “drop of red blood.” It was their way of giving back during November, which is Diabetes Awareness Month. (Provided photo)

“In the 35 years they have had the Student Hunger Drive, Alleman has been involved in it for 32 years and all 32 years we’ve won first place in any category we’ve been in,” she said.

“We would not be able to do this without our feeder schools,” Wetherell told The Post. “We count so much on them.”

Seton collected more than 50 boxes of food, while Jordan contributed over 750 cans. Our Lady of Grace, which always “kicks it,” did that again with students bringing in 10,500 cans of food.

“At Grace our motto is ‘Enter to Learn, Exit to Serve.’ So we always have service projects like these going on,” said principal Jim Caparula. 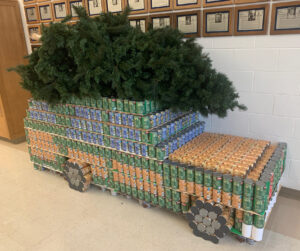 “CANstruction” is an annual homecoming project at Central Catholic High School in Bloomington. Each class creates a “sculpture” out of non-perishable items — such as this Christmas tree carrying vehicle designed by this year’s junior class — with the materials later donated to the local St. Vincent de Paul Food Pantry. (Provided photo)

He said awards were given to the top class (seventh grade) and top student in each class. In some cases the students gave the money right back — one to the Student Hunger Drive and another to World Relief. “We’re collecting coats for Afghan refugees,” Caparula explained.

“They get the whole service part,” he said.

“It’s nice that these kids are participating in this in grade school, so a lot of them already know about it when they get to high school,” Wetherell said.

The goal is to help students understand that reading and listening to the Gospels are important, but they must also translate that hearing into action, she added.

“As the superintendent I just love to see that they’re taking the Gospel mission and making it a lived reality,” Weiss said.